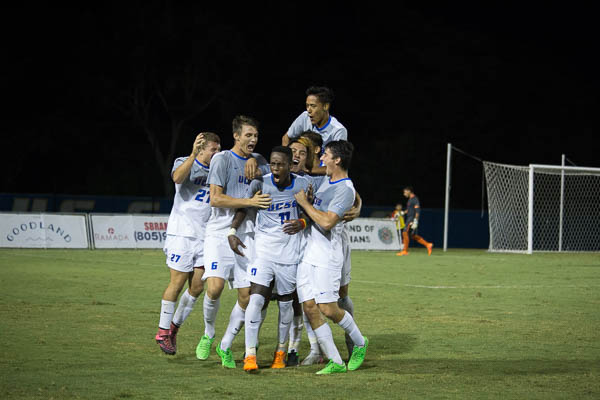 For the third straight year, the No. 17 UCSB men’s soccer team is hosting a Big West Semifinal, as it is set to take on UC Davis on Wednesday for the third time in three weeks.

Going undefeated through their final four games, the Gauchos finished with the conference’s best record at 12-5-2 overall and 7-2-1 Big West. They will be taking on a Davis team that they went 2-0 against in the regular season.

“We’ve just got to keep the same strategy that we’ve gone with into the first two games,” sophomore forward Ahinga Selemani said. “We just need to make sure that we pressure correctly and defend the right side properly.”

The Aggies come in at just 8-9-3 overall, 3-4-3 conference, but find themselves in a position to shock the Big West after a 2-1 overtime road win against Cal State Northridge in the Big West quarterfinals. Senior forward Matt Wiesenfarth played the hero in that game, scoring his fourth goal of the season on a breakaway in the 93rd minute.

In UCSB and UC Davis’ two meetings this season, the Gauchos came away victorious thanks to three goals from sophomore holding midfielder Kevin Feucht, all of which came from the penalty spot.

In the two teams’ first meeting at Harder Stadium, the Gauchos lost a 1-0 lead after conceding a 74th minute goal to junior Steven Guzman. It was a trademark goal for Davis that was characteristic of the gameplan it has continued to utilize against UCSB, being scored by a defender following a scramble off a long throw into the box.

“We have to have high pressure and keep them from scoring set piece goals because that’s where they’re most dangerous,” junior left back Ismaila Jome said. “Their two center backs have their most goals, so if we just keep them from getting any headers in the box and play as well as we have throughout the season we’ll be fine.”

However, junior forward Nick DePuy was dragged down in the box just 50 seconds after the Aggies’ equalizer, leading to Feucht’s second penalty of the game and eventual game-winner.

Davis brings to town a physical, sluggish style that serves as somewhat of a foil to UCSB’s more traditional approach of passing and making good runs into the box. The Gauchos ended the season with the eighth best offense in the nation, scoring 38 goals through 19 games.

“They have two guys, [sophomore forward Evan Barrett and junior forward Dashiell MacNamara], who are pretty quick,” Selemani said. “We just need to make sure we take those guys down and we have a good chance to win again.”

The Aggies’ offensive attack can be summed up by the fact that its top two goal scorers during the regular season were defenders in senior Lucas Mohageg and redshirt freshman Roy Boateng. They will be looking to keep the score low as they wait for their chance to pack the box and find a goal off a good ball in or a fortunate bounce.

“We work on [clearing] every practice, but especially [this week],” Selemani said. “We had everybody setting up in [Davis’] formations and defended like we would tomorrow, so hopefully that works as well and we get the result.”

Although the Gauchos have had great success during conference play in recent years, they have been unable to get it done when it matters most, going 0-3 over the past two postseasons. That will likely change this time around with an experienced core group that has grown together over the years.

“Since I’ve been here this is the best team as far as talent-wise, just collectively,” Jome said. “We have a good mix of younger guys and older guys and we know how big of a struggle it is to get into the postseason and win games.”

Under Head Coach Tim Vom Steeg, who received a record fifth conference Coach of the Year Award, UCSB’s dominant record this season was reflected in its dominance of the Big West yearly awards.

Nick DePuy earned his second consecutive Big West Offensive Player of the Year after scoring 15 goals through 19 games. To put that number in perspective, the four players who tied for second in goals in the conference had less than half of DePuy’s total with seven. Only one NCAA player, USC Upstate’s Gordon Wild (16), has scored more goals than him this year.

The 6-4 DePuy has been unstoppable all season thanks to a combination of size, good feet, extremely accurate shooting, and an excellent supporting cast that has given him great service. All of these factors have helped catapult him to a nation-leading eight game-winning goals. His individual success has led to the team’s success ever since he switched from the midfield to forward midway through last season, proven by UCSB’s undefeated record of 16-0-4 in games he has scored in.

DePuy’s aforementioned supporting cast includes Big West Freshman of the Year Geoffrey Acheampong, who scored four goals and led the Big West with 10 assists, good for sixth-best in the country. UCSB first-year players have now won the award in four consecutive seasons and six of the past seven.

Other players joining DePuy on the All-Big West First Team were Feucht, who was second on the team with five goals, junior midfielder Josue Espana, and senior defender Duncan Backus.

Selemani rounds out the long list of Gauchos receiving accolades, being named All-Big West Second Team with four goals. He ranked third in the conference with 50 shots, putting a high amount of pressure on back lines all year to help free up space for his teammates.

The Gauchos will benefit from having 11 nights of rest since their last game against Davis on Halloween, thanks to their winning the No. 1 seed and a bye in the first round of the postseason. In that final regular season game against the Aggies, UCSB came away with a 1-0 victory after freshman forward Cody Gibson was taken down in the box, leading to another game-winning penalty by Feucht.

The winner of Wednesday’s game will face the winner between Cal Poly and Cal State Fullerton on Saturday. If the Gauchos win, they will be at home for the championship game as they look to win their first Big West title since 2010.

“Tomorrow is the biggest test because we haven’t made it to the final in [four] years,” Jome said. “The biggest challenge would just be winning tomorrow, and after that, we have to take it game by game.”