The Daily Nexus
Sports
Strong Second Half Powers Gauchos to Win in Preseason Opener
November 9, 2015 at 6:28 am by Michael Jorgenson 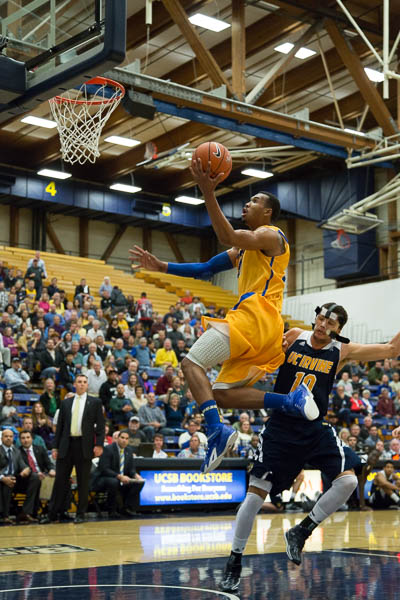 A strong second half allowed the UCSB men’s basketball team to pull away from San Francisco State in its season-opening exhibition last night in the Thunderdome. Senior guards John Green and Michael Bryson both hit the 20-point mark as the Gauchos nearly doubled the Gators’ scoring totals in the final 20 minutes on their way to a 66-45 win.

Green’s impressive stat line also included 12 rebounds and an efficient 9-14 shooting from the field. He was one of three starters to knock down a pair of three-pointers on the night, along with Bryson and freshman guard Gabe Vincent.

After a slow start for UCSB, which trailed 4-0 several minutes into the game, a three-pointer from Vincent began a 14-0 run for the Gauchos as they took control of the lead for the remainder of the game.

After a layup by Green at the 6:35 mark gave Santa Barbara an 18-10 lead, the Gators responded well, going on an 11-4 run to cut the deficit to just one point. However, Green put away the final six points of the half for UCSB including a jumper with 17 seconds left to take a 28-25 lead into the break.

The first half was a relatively sluggish one for the Gauchos, but they were able to turn that around in the second. A pair of free throws by senior forward Mitch Brewe made it 46-34 with 9:10 to go. Brewe led all bench players from either team with eight points on 3-4 shooting.

The Gators were shut down for much of the remainder of the game, shooting just 21.2 percent from the field in the second half. A three-pointer by Vincent with just under two minutes remaining gave UCSB its largest lead of the game at 65-42.

The Gauchos eventually went on to win by a final score of 66-45.

Despite having seven turnovers in the first half alone, UCSB fixed its mistakes by turning it over only two times over the final 20 minutes.

Vincent was the third Gaucho in double-figures with 10 points to go along with six rebounds, five assists and a steal. Bryson meanwhile had a solid overall game, shooting 8-17 from the field and picking up six boards, two assists, a steal and a block.

Leading the way for San Francisco State was forward Floyd Wormley. The senior shot 4-12 from the field to end the night with 12 points, six rebounds and four assists, all team-highs. As a team, the Gators finished an inefficient 15-59 (25.4 percent) from the field, compared to 25-57 (43.9 percent) for UCSB.

Senior point guard T.J. Taylor didn’t score, but was able to impact the game in other ways as he tied Vincent with five assists for the team-lead.

UCSB will travel to face the University of Nebraska-Omaha in its regular season opener this Friday.