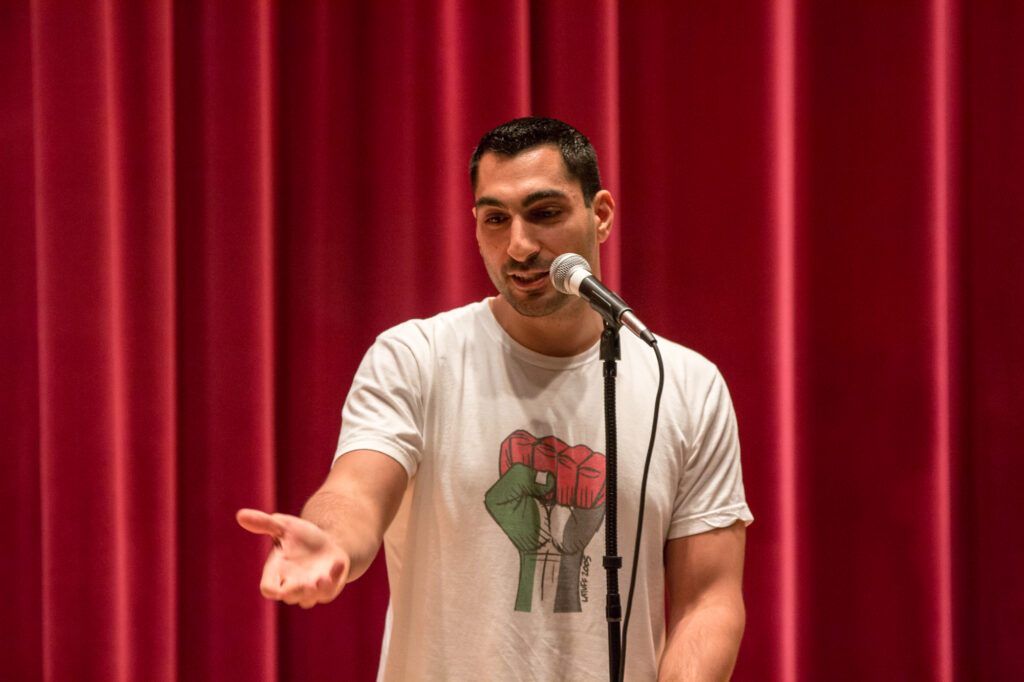 UCSB Students for Justice in Palestine (SJP) hosted A Night of Slam Poetry and Palestinian Culture featuring slam poet and human rights activist Remi Kanazi Thursday night in the MultiCultural Center as a part of the Palestine Culture & Solidarity Week.

Kanazi’s poetry focuses on what he considers to be the Israeli occupation of Palestine and the lack of American response. He performed a selection of poems from his new book, Before the Next Bomb Drops: Rising Up from Brooklyn to Palestine and discussed the Israeli-Palestinian conflict and university divestment from Israel. Following Kanazi’s performance, attendees were invited to stay for Palestinian food and live music.

Kanazi said his poetry is meant to inspire audiences to take interest in human rights issues across the world.

“[Divestment] is essentially saying ‘why are we investing in companies that are profiting off of very specific systems of oppression?’” Kanazi said. “Let’s say your university invests in Caterpillar. Caterpillar sends over militarized bulldozers to the Israeli state — they’re used to bulldoze homes, uproot olive trees, kill American citizens like Rachel Corrie.”

“I’ve always been a huge fan of spoken word, and seeing it from the mouth of someone that is passionate about the plight of Palestinian people — it was a new but also very enlightening experience.”

Natarajan said she enjoyed Kanazi’s poem, “You’re Not that Badass: #TwitterRevolutionaries” because it pointed to a “deeper truth.”

“He mentioned the Twitter Revolutionaries, which was really funny but also very true,” Natarajan said. “A lot of social media activists, or slacktivists, really speak from places of privilege where they don’t really understand the kind of things that they’re talking about.”

“I think anything that brings awareness, sparks dialogue in a meaningful way, is great and I’m really happy I came to this,” Subramanyam said. “Understanding oppression and how boundless it is can be really enlightening.”