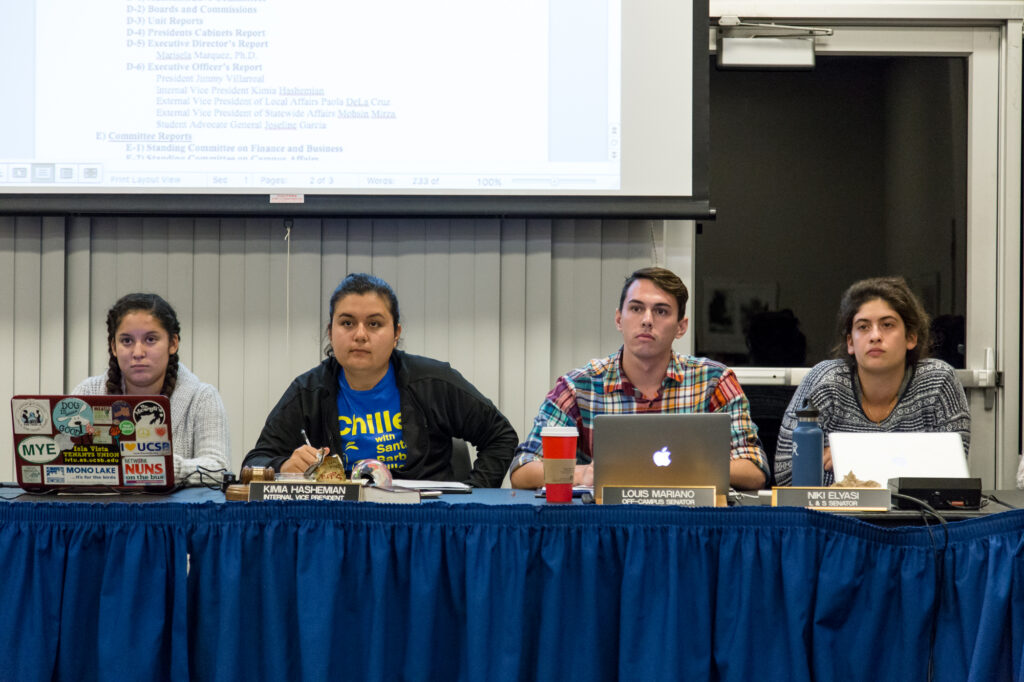 S.A.G.E. would instate $6 fee at every UC campus to support UCSA’s state-level advocacy efforts, but individual students would be able to opt out of the fee. Currently, UCSB students pay $9 to support UCSA, while other UC campuses pay less or none at all, with UC Davis paying $0 but holding equal membership.

LaVoie said she hopes the S.A.G.E. proposal will be brought to the UC Board of Regents at the end of January.

“We’re still working with president Napolitano on the language of the proposal, but she has expressed her support and we’re regularly meeting with legal council,” LaVoie said.

According to Mirza, most campuses pay $1.30 per student, while UCSB pays $9.

“I, as much as anybody, would like to see the playing field leveled,” Mirza said.

How is it my fault that my campus must pay as much as they should while every other campus is like, ‘we don’t want to pay, UCSB is paying, they’re paying our salaries, they’re paying everything, continue though we’ll get the benefits’ – United States Student Association member Zaher Akl

“UCSA really does do important work for students across the system,” LaVoie said. “We’ve had 50 years of work on student advocacy that [shows] we belong as a recognized student voice across the UC system.”

United States Student Association member and third-year anthropology and sociology double major Zaher Akl said many students do not realize how much more UCSB contributes to UCSA than other UC campuses.

Akl said amount UCSB students pay to UCSA compared to others is “shady.”

“How is it my fault that my campus must pay as much as they should while every other campus is like, ‘we don’t want to pay, UCSB is paying, they’re paying our salaries, they’re paying everything, continue though we’ll get the benefits,’” Akl said.

According to Akl, UC Office of the President (UCOP) would have the power to control S.A.G.E., making it a less effective use of UCSB students’ money than campus-based fees.

Akl said it would be better for UCSB students to pay into locally focused initiatives.

“These funds that we’ve paid over these years – don’t you think this could’ve went towards something productive in Isla Vista?” Akl said. “What are we getting out of UCSA?”

“If you look at how much the other UCs are paying into it, it is clear that we’re basically paying for his budget, and that really sucks,” Magaña said.

“UCSA’s budget is at the whim of student leaders, who change every year,” Mirza said. “Although the UCSA issues don’t change each year, there is unpredictability with the budget cycle.”

The amount of misinformation found in this article is astounding. It is clear that people don’t understand the work that UCSA does on behalf of every UC student, let alone how it functions. Wished the Nexus would’ve spent a little bit more time doing research instead of providing such misinformation to its readers.

The extent to which The Daly Nexus allowed the “journalists” who wrote this piece and the publication itself to be manipulated by one individual who holds no reasonable or thorough understanding of UCSA and its relationship to UCSB students is truly indicative of the quality and bias the Nexus consistently exhibits. As for the poor soul Akl, who seems to be chomping at the bit to make any speculative and misinformed point a reason for the undoing of SAGE, his efforts seem far better suited to nitpicking in a more local and less influential space, since he feels that the… Read more »

Are any of the Associated Students in the UC incorporated in California? In other words are your student associations nonprofit public benefit corporations? In the CSU 22 of the 24 associations are incorporated. I only ask because I am wondering the extent to which students are actually in control of your fees.