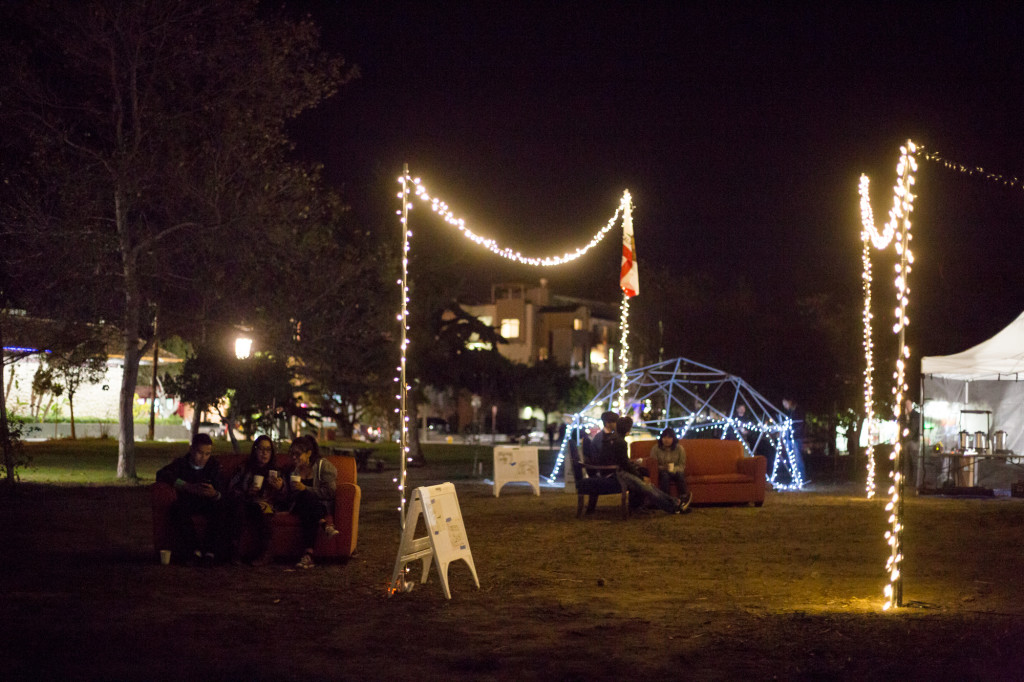 Mosh pits, bands and psychedelic projections welcomed students who preferred the sobering glow of Perfect Park to the rowdy crowds and drunken students of Del Playa Drive on Friday.

I.V. Downtown Business Association Vice President and this month’s First Fridays sponsor Jay Freeman, who has lived in I.V. for 15 years, said the event was a success and the attendees all seemed to be enjoying themselves.

“We got a lot of people, people seem to be having a lot of fun and they seem to be buying the apple cider and pumpkin bread,” Freeman said. “I’ve never seen a mosh pit this early in an event.”

“The goal for I.V. First Fridays is to have a positive environment with a concert in the park.” Freeman said. “To try and bring people who might otherwise be wandering off to get drunk in DP, to instead come back over to the business district and to take advantage of all the parks in the Isla Vista Recreation and Park District.”

According to Freeman, the bands and DJ at the event were meant to appeal to students.

“You may describe First Fridays as a more youth-orientated art show,” Freeman said. “So instead of going and standing in a white room with a bunch of wine, you go off into the park with a concert and a mosh pit.”

IVRPD general manager Rodney Gould said each event is a little different depending on the student involvement.

“Every First Friday is a little bit different depending on the energy that the hosts put into it,” Gould said. “I really love this set-up – the lights are amazing and the video-mapping – I’m not sure what they call it but it’s pretty impressive.”

“It’s warping parts of the image we’re projecting to fit onto the 3D surface, so we were mapping videos on different parts of the building for a fixed perspective,” Rodrig said.

“It’s been awesome. I love the bands playing and we got the lights up, Crunchy Foam doing the light projections and Isla Carte doing the whole food thing with sustainability,” Pragin said. “Everything’s running really, really well.”