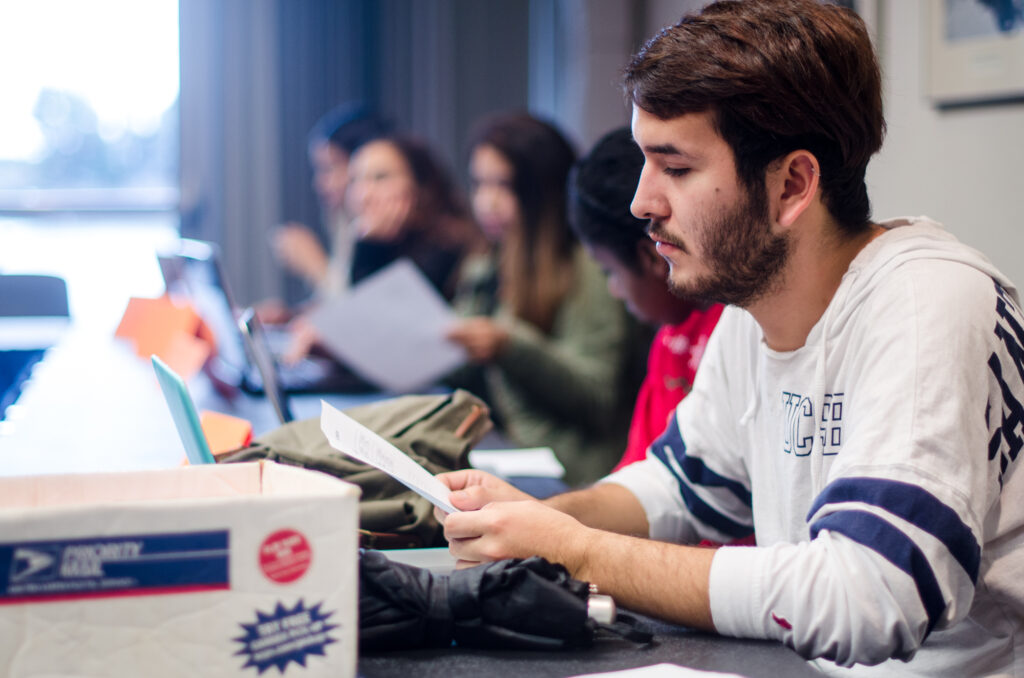 Men’s Lacrosse requested $3,400 to make t-shirts for their annual “Faceoff Versus Leukemia Tournament” to raise money for the Leukemia and Lymphoma society.

Men’s Lacrosse team captain Matt Herning said the event honors 2008 team member Stephan Meloy who passed away from leukemia by donating the fundraised money to the Leukemia and Lymphoma society in his name.

“We had a player on our 2004-2008 team named Stephan Meloy who passed away from leukemia so we donate the money every year in his name and his mother comes each year to support,” Herning said.

A.S. F&B voted to fully fund the event with the stipulation that Men’s Lacrosse use their one exception since A.S. F&B does not fund t-shirts.

“I want to break down this barrier between graduate students and undergraduate students,” Johnson said. “We should be able to have conversations about political science outside of the classroom.”

A.S. F&B voted to table the request for a week with the stipulation PSGSA fill out an I-360 form.

“Last year, we invited several scholars from China and they talked about finding careers and choosing majors, since many freshmen are confused about those things,” Diao said.

A.S. F&B voted to partially fund the request, which the stipulation that CSSA not use the funding for plastic water bottles.

A.S. F&B voted to partially fund the request with $3,500 because only five members of the organization have confirmed their attendance at the conference.

“We are a mental health organization focused on reducing the stigma around mental illness and changing the conversation on mental health,” Jones said. “We’re hosting an event called Stigma Free UCSB. We also had it last year and it was a big success.”

“The last Democratic Debate Watching event we had was a huge success,” Villalobos said. “We had Campus Republican show up as well as many progressive student groups like CALPIRG and System Change for Climate Change. Planned Parenthood and Generation Action were also there.”

“This weekend most of the pharmacies around here ran out of Plan B, and that actually happens quite frequently,” Dordi said. “Planned Parenthood is also quite far and inconvenient for students.”

The Queer Commission (QCom) requested $10,824 to send 20 students to the National Creating Change Conference in Chicago.

“The Creating Change Conference is for LGBTQIA+ folks and it’s held in a more international viewpoint,” Hardenbrook said. “There are many awesome LGBTQIA+ advocates there and it really highlights the international community.”

A.S. F&B voted to table the request until next week’s meeting.

A.S. F&B voted to partially fund the event $275 with the stipulation that the Recreation Center look into additional funding from University Center Governance Board.

UCSB Poet’s Club requested $400 to host a poetry slam night in The Hub. The event would be an extension of the bi-weekly Thursday slam poetry nights the club hosts in I.V.

UCSB Poet’s Club founder and fourth-year chemical engineering major Francis Cunningham said the event would give members an opportunity to perform their poetry in a more formal seating with a larger audience.

“We want to hold a larger, more formal event in The Hub,” Cunningham said. “The reason we want to do this is to allow more experienced or ambitious members to debut in front of a larger crowd.”

And I am an individual working to stop you from saying there is one.

The Women’s Movement told us unequivocally to end the bullying mind game, rape/stigma. Re-directing it does not alter the game, only the intended victim.