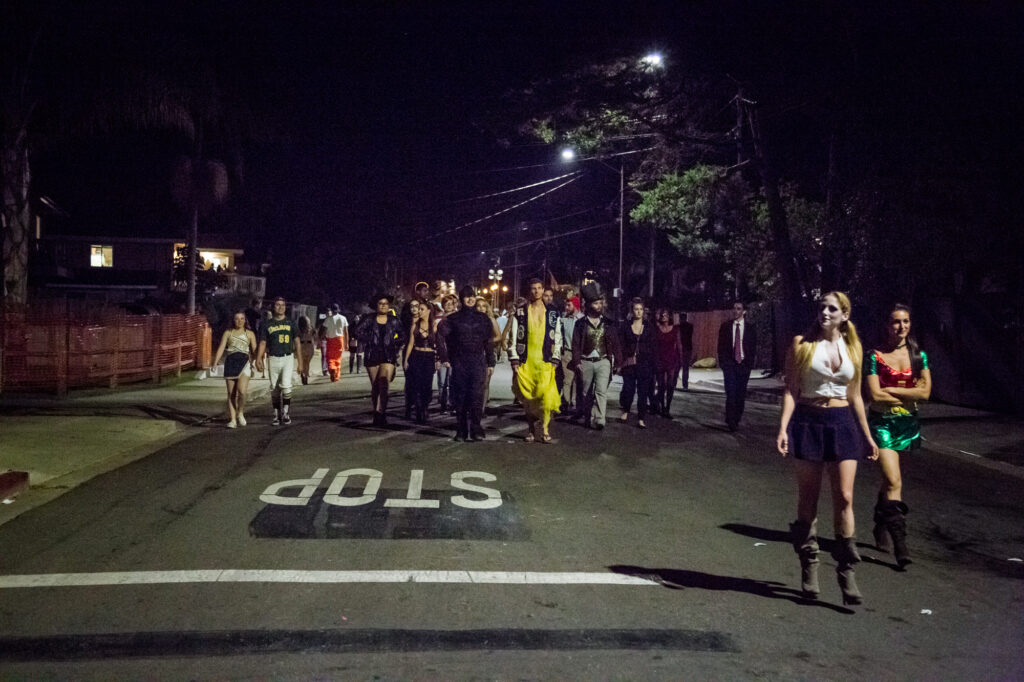 According to a press release from the Santa Barbara County Sheriff’s Office (SBSO), crowds on the streets in I.V. numbered approximately 500 people, largely UCSB students and other local residents, compared to several thousand in 2014 and 12,000 to 15,000 in 2013, a large portion of which were out-of-towners.

SBSO reports an estimated 28 misdemeanor arrests were made on Friday and Saturday compared to the 40 made in 2014 and 200 over a three-day period in 2013. There were seven medical transports, also significantly lower than in previous years, according to the SBSO.

SBSO attributed the quiet weekend to alternative, campus-based events, which drew crowds away from house parties and limited Halloween festivities to UCSB students. The Associated Students Program Board drew many students off the streets of I.V. and into the Thunderdome with musical performances by Fitz and the Tantrums on Friday and Snoop Dogg on Saturday.

SBSO Public Information Officer Kelly Hoover said the Sherriff’s Office “credits the students” for the decrease in visitors from out of town coming to I.V. to celebrate Halloween.

“[The] community has been through a lot, and the students no longer wanted to risk inviting out-of-towners,” Hoover said. “We believe the students have a lot of pride in our community and had a huge hand in keeping the event local.”

Hoover also said student organizations like UCIV working alongside law enforcement contributed to the relative quietness of Halloween this year.

“There’s nothing like students helping enforce the rules, and they were passing out safety tips and passing out water,” Hoover said. “They were reminding students to move their cars and keep in accordance with the ordinance. It was really great working with students this weekend.”

“You could walk down the street and see officers playing Frisbee with some of the people walking about,” Mosbey said. “There was a record low number of [citations] handed out this year.”

Mosbey also said the two concerts hosted by A.S. Program Board were “incredibly effective” at preventing crowds in I.V.

“The only time I saw traffic while walking I.V. was students going to the concerts,” Mosbey said. “I applaud and am so appreciative of Program Board for putting on such a great program this year with artists that the students just really wanted to hear.”

“Even when our volunteers went to warn people about the noise ordinance, their warnings were received in a very positive manner and they really appreciated what we were doing,” Mosbey said.

“These students were giving out warnings about noise ordinances and citations,” Dela Cruz said. “I’m just really glad to have seen Isla Vista safe and local.”

“That event to me signified a shift in culture — of students taking a stance and saying we want to make sure that the families and the children in our community know that they can also trick-or-treat in Isla Vista, that it’s not just a place where students are just going to get drunk,” Dela Cruz said.

“Our local businesses came together and gave us free stuff and helped us enjoy ourselves,” Dela Cruz said. “It was a collaborative effort and students enjoyed it.”

Fourth-year sociology major Andrea Cisneros said over the past few years the police presence has changed the Halloween culture in I.V.

“The Halloween from my first year was very different from this year,” Cisneros said. “My first year, Halloween was a big deal. There were still some of the same regulations — like in the residence halls we weren’t allowed to have visitors — but there weren’t that many police.”

“Having Snoop Dogg and filling the Thunderdome on the weekend was a great success,” Cisneros said. “I think people took initiative to plan alternative events because they understand that not everyone wants to party this weekend, which was really nice.”

“They helped discourage the idea that it gets super crowded here during Halloween because most people were busy with the activities,” Gil said in an email. “I think this will also discourage more people from coming next year.”

Gil said this year the Halloween celebration in I.V. was safer and more enjoyable than years past.

“I thought it was better because there were more options, like having two concerts and the roller skating at the Rec. Cen.,” Gil said in an email. “Also, there wasn’t too many people walking the streets, so it wasn’t that crazy.”

First-year biopsychology major John Nguyen said although the police presence in I.V. over the weekend was alarming at first, he felt safer throughout the weekend with a visible law enforcement present.

“I think students were shocked by the amount of police presence,” Nguyen said. “But I think the ultimate consensus was that the police presence made us feel safer.”

Hoping this was a typo: You’re telling me in a community of 23,000+ people only 500 of them went outside on a perfect weekend night for Halloween?

And when they did 28 of them were arrested?

And yet a year ago when 12k-15k people partied in IV for Halloween, 40 people were arrested?

So attendance of a perfectly legal quasi holiday, celebrated in communities all over the USA, dropped from 15,000 to 500 and yet only 12 fewer people were arrested?

I see soooooo many things wrong here. Don’t you, Nexus?

Tony I went out on DP friday to my friends house to hang out and took a picture of how empty it was on the way there. Its hard to believe but it really was like 500 people not including the cops. As for the arrests It probably had to do with them busting everyone at one or two houses for whatever reason. Also it seems like each year they’ve been doubling the number of cops here so previous years they were probably more focused on moving crowds and this year since they outnumbered people were able to focus more… Read more »

We need a redo next weekend!!
http://www.buzzfeed.com/halloween2/top-eight-reasons-for-halloween-2-in-iv-1ya7b

If by success you mean that no one felt safe enough to leave their houses without being harassed by the police, then it was a GREAT SUCCESS. This whole article is nothing but a public relations statement. Journalism shouldn’t be justifying police repression. What kind of f’ed up world do we live in that a military-style occupation of our town where no one is allowed to listen to music and walk around the streets is considered a success??? Ask the dozens of people who got their cars towed if it was a success? Or the dozens arrested? Or the people… Read more »

b
Reply to  anonymous

I *am* grown up and I agree totally with what “anonymous” is saying. What part of maturity includes letting the police lock down a community simply because it’s Halloween? It was Halloween in West Hollywood and 100,000 people showed up for that party and only 3 were arrested. Why? Because people who ARE grown up would have called bullshit on cops abusing their power and limiting freedom. Instead of fighting the inevitable, the LA County Sheriff has worked with the community of WeHo for years to provide security – not tyranny. Because of that WeHo’s Halloween party is the largest… Read more »

Go back to west Hollywood then. Isla Vista was becoming something ugly and unsafe. I’m glad your rich town of West Hollywood could throw a sanctioned party that catered to a red carpet crowd of LA snobbery without making arrests. Yes, I googled it. But we live in a town that was increasingly unsafe…were you out here during the riots? During the shooting? If not, then please stfu. If you were, then you should be thankful that things are getting better.

Maybe the current crop of UCSB students doesn’t care about trashing IV like you and your buddies did 24 years ago. It’s none of your fucking business now, is it?

Cory Trevor
Reply to  b

Umm… the riots were caused by the police. There was no rioting before the police invasion. The riots were a response to the aggressive/militaristic behavior of the Sheriff’s Dept. It was a police occupation. The riot label was a public relations narrative pushed by the police and adopted uncritically by the media. Go read Professor Newfield’s excellent reporting on this tragic/traumatic event. I am sure that local residents thought that surveillance cameras, tear gas, rubber bullets, and crowd control noise weapons being used on them was a great success too? Only 500 people came out in the streets in a… Read more »

We didn’t want to riot. The police MADE us do it! Over-policing is debatable (barely), and every other community in this country would throw 80% of you dumbshits in jail every weekend if you behaved the same way. Don’t fool yourself. The police are so active in IV because it’s a community of 20,000 20-year-olds. It’s Lord of the Flies except that there are girls and everyone is horny as shit. You’re not adults and you can’t be trusted to behave like adults. Every time you cry “police state!” you make it that much more obvious. You’ll understand when you’re… Read more »

You’re an idiot. You don’t know shit about me, including my age. Stop demonizing the younger generation. They are adults. They vote, pay taxes, get into crazy debt going to this university, work full time. They are currently serving overseas in harm’s way, putting their lives at risk. You are nothing but a moral crusader who believes that the solution to young people wanting to have fun is to punish and discipline them. Last time I checked having fun (and having sex) are perfectly legal (and perfectly ethical). You should behave a little bit more like an adult if you… Read more »

b
Reply to  Cory Trevor

Voting, paying taxes, going into debt, working full time, and serving in the military are not indicators of adulthood. Those are all activities. We could let a 10 year old do any of those things but they still wouldn’t be an adult. Brain development and life experience. Those are your only choices, and neither of them can be expedited. Sorry Cory. You’re not an adult. I’m not a moral crusader. I want you all to have fun and not be punished for it. That doesn’t mean you get to do whatever you want. We have 20,000 kids who think they… Read more »

The cops haven’t done shit here because they can’t. After many years of bringning in hundreds of them, nothing was ever accomplished. In fact, it just got worse. And while I don’t agree with Cory completely, he has a point that the riots would not have existed without cops. The town might have burnt down instead, but that’s really besides the point because we don’t know what ‘might’ have happened without them. What I do know is that IV wasn’t turnt down because of cops. They don’t have the power to do that. We turned this shit down because we… Read more »