The Daily Nexus
News
Pizza with Police Addresses Halloween Expectations
October 30, 2015 at 5:01 am by Patrick Guardian 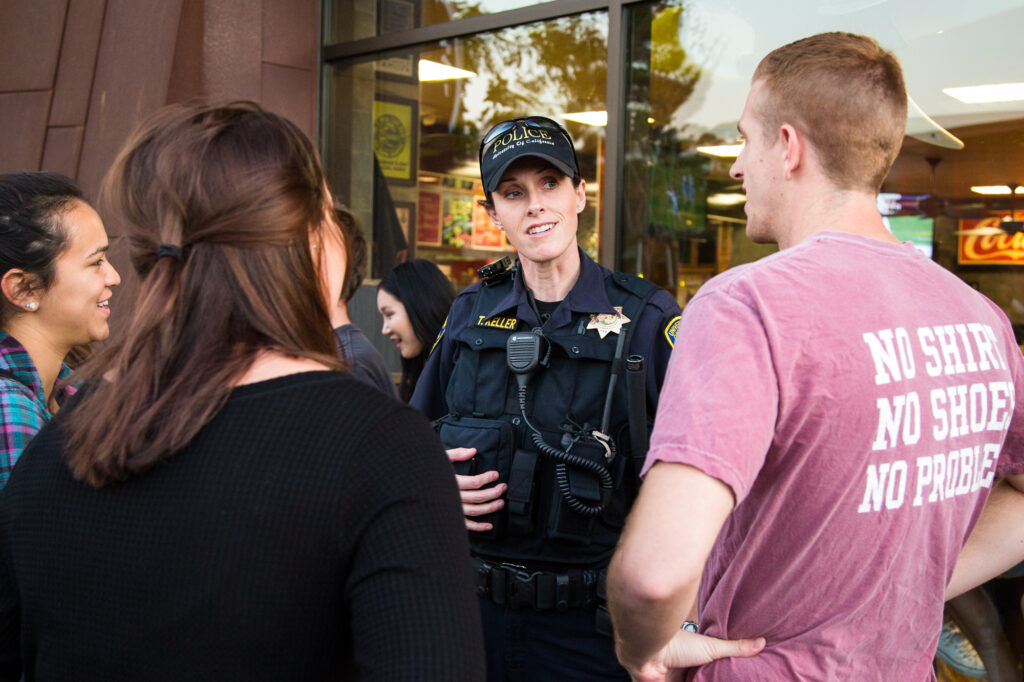 Pizza with Police provides an opportunity for students and residents to meet officers and deputies from both departments to ask questions about local law enforcement in the community. Law enforcement officers addressed concerns about police barricades, amnesty legislation, noise ordinance and Halloween costumes.

UCPD Sergeant Matt Bowman said the festival ordinance on loud music, which began Oct. 26, will be in place until Nov. 4.

“The ordinance is if it’s able to be heard from the street, so that means the property line, so police walk out to the street to listen,” Bowman said. “If they can hear it, it’s too loud.”

According to Bowman, streets will be cleared of cars and police barricades will be in place from 5 p.m. until 3 a.m. on the days surrounding Halloween.

“At about 3 p.m., they’re going to start towing cars off the street, and, again, that’s to benefit the entire community, because it gets so compacted with people walking up and down the street that those extra cars on the street make it unpassable, and we need to open it up,” Bowman said.

Bowman said the barricades will not completely block off the roads because some vehicles may need to pass in an emergency.

“We don’t want you to, but if it’s an emergency situation, you may — but, goodness, be careful; there’s a lot of people out there,” Bowman said.

Bowman said it is important to understand amnesty legislation, which protects any individual from being charged for possession if they call emergency services for someone in need of help.

“Amnesty is legislation … that says police officers will not make arrests in cases where people call to get people medical aid,” Bowman said. “So remove that fear, get that person the help that they need, because the last thing any of us want, I’m sure, certainly all the officers, is for somebody to not get the help they need when they’re intoxicated or overdosing or something like that.”

“If you are detained by an officer, they do have the right to identify you if they have reasonable suspicion or probable cause, so you may be asked to remove it to verify who it is under the mask,” Bowman said.

IVFP Deputy Julio Gutierrez said he expects Halloween this year to be tamer than in past years.

“I think that after the riots, the community has done a very good job of keeping it low-key, keeping it a more localized event,” Gutierrez said. “I know a lot more students this year are against having outsiders come in. For the most part, they’re doing their part.”

According to Gutierrez, starting the music ordinance at 6 p.m. will help prevent problems as the night progresses.

“Because the Halloween event is one that is known to attract a lot of outsiders, what a lot of people do is they tend to party during the day and come out to the streets at night,” Gutierrez said. “If you party during the day, drink alcohol during the day, by the time night time comes around, people are intoxicated, they make poor decisions, inhibitions are thrown to the wind, then we have the problems in the latter part of the night.”

Gutierrez said law enforcement officers are present to ensure safety, and Halloween is no different from any other night.

“We’re here to ensure that if someone is intoxicated to the point where they can’t care for themselves, that they’ll have someone watch out for them,” Gutierrez said. “Unfortunately, watching out for them in that state means taking them to the hospital or to jail. People drink; sometimes they go overboard. As long as everybody’s safe and no one gets hurt or injured, then, for us, that’s a good night.”

Deputy Kim Fryslie said the best way for students to make sure they are not breaking laws is to understand them. Fryslie recommends students to Google “SB County ordinances” and look on the county page at the following link: countyofsb.org/lawsregulations.sbc

“I think a lot of the problem in Isla Vista is that the information is presented to the students in such a way that some find it not very comprehensive, and this site will be helpful to those who want to know exactly … how they can safely follow the rules,” Fryslie said.

Gutierrez said law enforcement and students have the same goal for Halloween celebrations.

“I think a perfect night for us is we come out here, we patrol and we don’t have to arrest anybody or write any tickets,” Gutierrez said.

“‘I think a perfect night for us is we come out here, we patrol and we don’t have to arrest anybody or write any tickets,’ Gutierrez said.” That’s not what I saw last Halloween when I went out Copwatching with a few other concerned citizens. We saw police officers writing tickets at the corner of Abrego and Del Sur for not making complete stops at the stop sign, and we heard one of the officers tell the driver, “This is Halloween. If somebody sneezes the wrong way, we write them a ticket.” After all, the hundreds of police in town… Read more »

b
Reply to  Jason G

Yes heaven forbid people actually stop at stops signs when there are thousands of people in the street. POLICE STATE

You seriously only quoted the police and didn’t get anyone else’s perspective? Context: first of all, I’m a UCSB alum, I didn’t even party on Halloween because people are plenty stupid when they’re sober, I’ve never had any problem with law enforcement, and they’ve never had any problems with me. All that said, you need to understand the incentives involved. The more people who get arrested and fined, the more money the city makes that night. “I was arrested on Halloween! Sure I was drinking and partying, but I didn’t do anything wrong!” Police officers know that that sounds like… Read more »

b
Reply to  Steven Phillips

They’re making a fraction of the money that Halloween costs them. The city doesn’t profit from this.