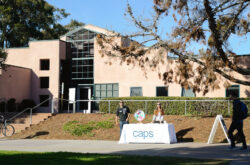 Recently, on Oct. 12, the organizations UCSB Active Minds and the Santa Barbara Wellness Center put on an event at UCSB called Send Silence Packing. This event was designed to raise awareness about the number of college students whose lives are lost to suicide each year by displaying 1,100 backpacks along with some individual stories. I briefly attended the exhibit, and found it very powerful. The death of a young person no older than me is a horrible tragedy. However, the exhibit also left me with some serious reservations about the methods being used by many mental health organizations on our campus. Specifically, I am concerned that some groups may be pushing an agenda that infringes on the civil liberties of those experiencing certain forms of mental illness.

Let me give an example: for a while now, UCSB’s Counseling and Psychological Services, which tabled at the Send Silence Packing event, has been using the slogan “#SaySomething” to encourage dialogue about mental health. This slogan sounds eerily similar to the Department of Homeland Security’s warning “If you see something, say something,” encouraging American citizens to report acts of suspected terrorism. Is C.A.P.S. sending the message that we are supposed to report on mentally ill people like we do on terrorists?

On its website, C.A.P.S. has a list of “Warning Signs of Distress” that students are encouraged to search for in others as well as in themselves. C.A.P.S. also encourages students to ask their friends about suicide indirectly, gaining their trust with phrases like “Do you ever want to go to bed and never wake up?” while at the same time, telling students, “Don’t promise confidentiality. Get others involved. You need back-up support and so do they.” At the Send Silence Packing event, I received a flier which said that “67 percent of college students TELL A FRIEND they are feeling suicidal before anyone else,” and that “You can make a difference for people that are struggling.”

While some might find these messages inspiring, I find them concerning. I do not want to live in the kind of world that C.A.P.S. envisions, where the state of my mental health is a public concern. In fact, one might even describe this sort of surveillance as Orwellian.

While I was at Send Silence Packing, I briefly spoke to one of the organizers of the event, and we had a very thoughtful conversation. She acknowledged that my concerns about individual rights are legitimate, and that there exists some tension between respecting people’s civil liberties and saving them from making a rash decision that might not be in their best interest.

If I have a legitimate point, then why is no one else making it? To the best of my knowledge, none of the mental health organizations on campus advocate for the civil liberties of people with mental illnesses at UCSB. Pro-choice activists are quick to make themselves heard when the topic of abortion comes up, but there are few people who openly advocate for personal choice in the realm of mental health.

In January 2015, Jimmy Villarreal, at the time a Letters and Science Collegiate Senator in Associated Students, proposed a program that would train students in performing “mental health first aid.” The idea behind the program was, in Villarreal’s words “to have as many students on campus as possible that can recognize [distress] before you’re really in trouble [and say], ‘Hey you doing okay?’” Jimmy Villarreal is now Associated Students president. During his presidential campaign, he continued to advocate for the “mental health first aid” program.

Although I have great respect for Jimmy as a former political opponent, I believe that the sort of “mental health first aid” that he has described is not comparable to traditional first aid. In a typical first aid situation, the problem is obvious — neither the person being treated nor the person performing the first aid is in doubt — and both typically agree to the treatment.

“Mental health first aid” sounds to me like a system that encourages students to mind each other’s business, to pry into the affairs of those around them to determine whether they are sad or depressed. Coupled with the suggestions on the C.A.P.S. website, this program could potentially encourage students who sense that a fellow student might be unhappy to report them to the authorities.

Let us consider the full ramifications of this for a moment. If a student is found to be suicidal, they will be placed on a 5150 involuntary psychiatric hold. They will be taken into custody by the police, who often have no training in handling individuals with mental illnesses. (There have been many cases where suicidal people were shot by the police officers who were called to help them.) If the 5150 patient survives the detainment, they will be placed against their will in a psychiatric institution for 72 hours, where they can be deprived of their basic freedoms or held for a longer period of time if psychiatrists deem it necessary.

For many people who experience it, a 5150 involuntary psychiatric hold is a uniquely traumatic experience of utter powerlessness that will haunt them for years to come. One anonymous writer for the Huffington Post described his 5150 experience as “The Most Harrowing Days of My Life.” After voluntarily seeking help for an emotional breakdown, the author, a successful middle-aged businessman, was incorrectly labeled a suicide risk after responding to what he thought was a purely hypothetical question about preferred suicide methods. (This practice of asking hypothetical questions to gauge suicide risk is not so different from the “asking indirectly” process that C.A.P.S. recommends on its website.)

If a student needs help, they should contact C.A.P.S., but C.A.P.S. does not need to go looking for students to help.

Once involuntarily committed, the patient was placed in an institution where he and the other patients were continually under surveillance, received unidentified medication but no therapy and where his only meeting with a psychiatrist involved him being informed that he could be committed at the psychiatrist’s pleasure for a further 14 days (a terrifying prospect for the author of the article, because it would have destroyed his career). When he left the institution, he was forced to sign a form saying he would not buy a gun for five years. Regardless of one’s views on gun control, it must have been extremely degrading and humiliating for this grown adult to be assumed mentally unfit to handle a weapon that other citizens are permitted to own.

The anonymous author describes the state mental health system as “an uncaring, impersonal, and arbitrarily subjective system that might preserve life, but, at best, tragically misses the chance to heal, and, at worst, degrades and frightens those who, at their most vulnerable, deserve better.”

How can organizations like C.A.P.S. talk about “ending the stigma” surrounding mental health when this sort of treatment is a potential consequence of a student coming forward? And why are we actively training students to subject each other to this?

I am grateful that we have so many excellent mental health resources on our campus at UCSB, and I fully support initiatives to expand these resources, such as the “#HowAreYou” campaign currently being undertaken by the EVPSA’s office. However, I believe that students should be allowed to use these programs, or not use them, entirely at their own discretion. If a student needs help, they should contact C.A.P.S., but C.A.P.S. does not need to go looking for students to help.
My attitude towards mental health resources is the same as my attitude towards law enforcement, medical professionals and the guy in Albertsons who asks if you’re finding everything okay: “If I need your help, I will ask for it; otherwise, please leave me to my own devices.”

Conversations about mental health on our campus should, at the very least, be willing to consider the civil liberties and bodily autonomy of students with mental illnesses. For now, we should continue to ensure that mental health services at UCSB are open to all, and that they are used voluntarily and free of coercion by students who genuinely wish to use them. By treating students with mental illnesses as adults capable of making personal choices about their treatment, perhaps we will help to restore in them some of the feelings of dignity, self-love and personal empowerment that mental illness has robbed from them. Perhaps that is how we can truly “end the stigma.”

Jason hopes UCSB will be at the forefront of mental health care without aggravating the psychological pain of individual students.

Never offer validation to a claim of stigma. Educate people making such claims, that they stop.

The Women’s Movement told us unequivocally to end the bullying mind game, rape/stigma. Re-directing it does not alter the game, only the intended victim.

Thank you so much for this insightful point of view. The medics
Profession has indeed lost its way as it seeks to CYA instead of heal. Students in particular experience extreme stress for many reasons and compassionate support including the right to privacy and services that heal rather than serve the Heath industry are missing on campuses and in the community. A change is long overdue. Thank you for raising the dialogue to this level. I hope you are heard.