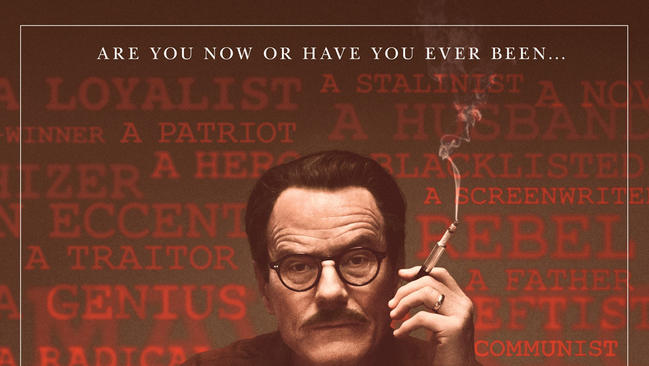 As a writer, I found myself basking in the characterization wonder that was Dalton Trumbo, realized on-screen by Bryan Cranston. I believe the audience in the Pollock did as well, as they were not only laughing uproariously at the string of witticisms that flowed freely from his mouth, but also at the rest of the characters, realized by the collaborative efforts of John McNamara and Jay Roach.

The eponymous film relegates the most turbulent period in the screenwriter’s life — during which he and his fellow members of the Hollywood Ten were blacklisted from working in Hollywood thanks to the U.S. government finding them in contempt of Congress for refusing to testify.

The film is about an ideological battle for justice, as well as a study of Trumbo as a person. The acclaimed writer is a Communist who loves money and a family man more invested in his work than family. He’s an intellectual blind to the fact that his crusade is hurting those he cares about, yet he continues to undermine the forces that put him and his fellow writers out of mainstream Hollywood by writing for a B-movie studio (run by John Goodman in his usual fine, somewhat disgruntled form) and working with fellow blacklisted writers, one of whom is played by the suitably acerbic Louis C.K. But I digress. Will “Trumbo” earn Bryan Cranston his first Oscar? Who knows, but if he doesn’t at least get nominated, I’ll (insert half-assed Cold War joke disguised as a threat here) the Academy.

Out of the film’s expansive ensemble cast, some other notable and as of yet unmentioned names include Elle Fanning as Trumbo’s strong-willed daughter Nikola (a role she absolutely excels in), Alan Tudyk as indignant writer Ian McLellan Hunter (and former professor of McNamara’s) and Christian Berkel in a hilariously scene-stealing performance as the dry-humored director of “Exodus,” Otto Preminger. However, I do have to admit confusion as to why Adewale Akinnuoye-Agbaje got such a high billing in the credits; while he was quite good in his role, he was onscreen for less than ten minutes.

When it comes to a film such as this one, however, credit absolutely must be given to the screenwriter. McNamara managed to generate smart humor and really rile up the emotions in his script. Often, the humor comes from the dialogue as opposed to the situations the characters find themselves in (with the exception of one gleefully violent scene featuring John Goodman taking a baseball bat to a politician in the epitome of a liberal apologist’s wet dream), showcasing the biting wit of Hollywood’s best.  Through both the celebrity figures’ and the common man’s treatment of Trumbo and company, we are reminded of how overwhelmingly, cruelly paranoid (and, in John Wayne’s case, even somewhat hypocritical) communist-era America was. In light of … ahem, recent events, one cannot help feeling a sense of déjà vu; as Roach said during the Q&A portion of the Pollock screening, “Who would spend millions of dollars on a committee to ask hours of questions and get nothing?” Ouch.

Once the film was over and the applause had died down, the gangly Roach and the squinting McNamara strode onstage to be greeted by the smiling Pollock director, Matthew Ryan. When asked about how he had come to write the film, McNamara described how he had first encountered Bruce Cook’s biography Dalton Trumbo in his 20s, only to adapt it 30 years later. A friend who had read the book convinced him when he they said, “It’s the rarest thing: a true story with a happy ending.”

Meanwhile, former “Austin Powers” director Jay Roach (a franchise which he said he’d be willing to work on again) sung the praises of many, including McNamara for his script and the Hollywood Ten for their sarcastic wit. He told amusing stories about the cast as well, such as recounting Helen Mirren’s love for her character’s hats and Elle Fanning’s unnerving ability to refrain from blinking. Roach also highlighted the conservative views America held at the time, highlighting his father’s own opinions and the film industry’s efforts to make Hollywood seem more “American.”

“Trumbo’s” ultimate prevailing theme (one which the trailer shoves in your face) is that nobody has the right to tell you what to do and how to think. If someone like Dalton Trumbo comes face to face with overwhelming odds and stand up against them, they’ll come out all the stronger in the end. And no matter how bad the fight gets, nobody is ever truly alone.  If I may paraphrase the line that got the loudest applause, “For better or worse…we are Spartacus.”

Alex Wehrung would like to say that the experience was worth sitting in the front row, as well as the ensuing cramping in the back of his neck.

Looking forward to meeting Jay Roach one of these days.
Fritz