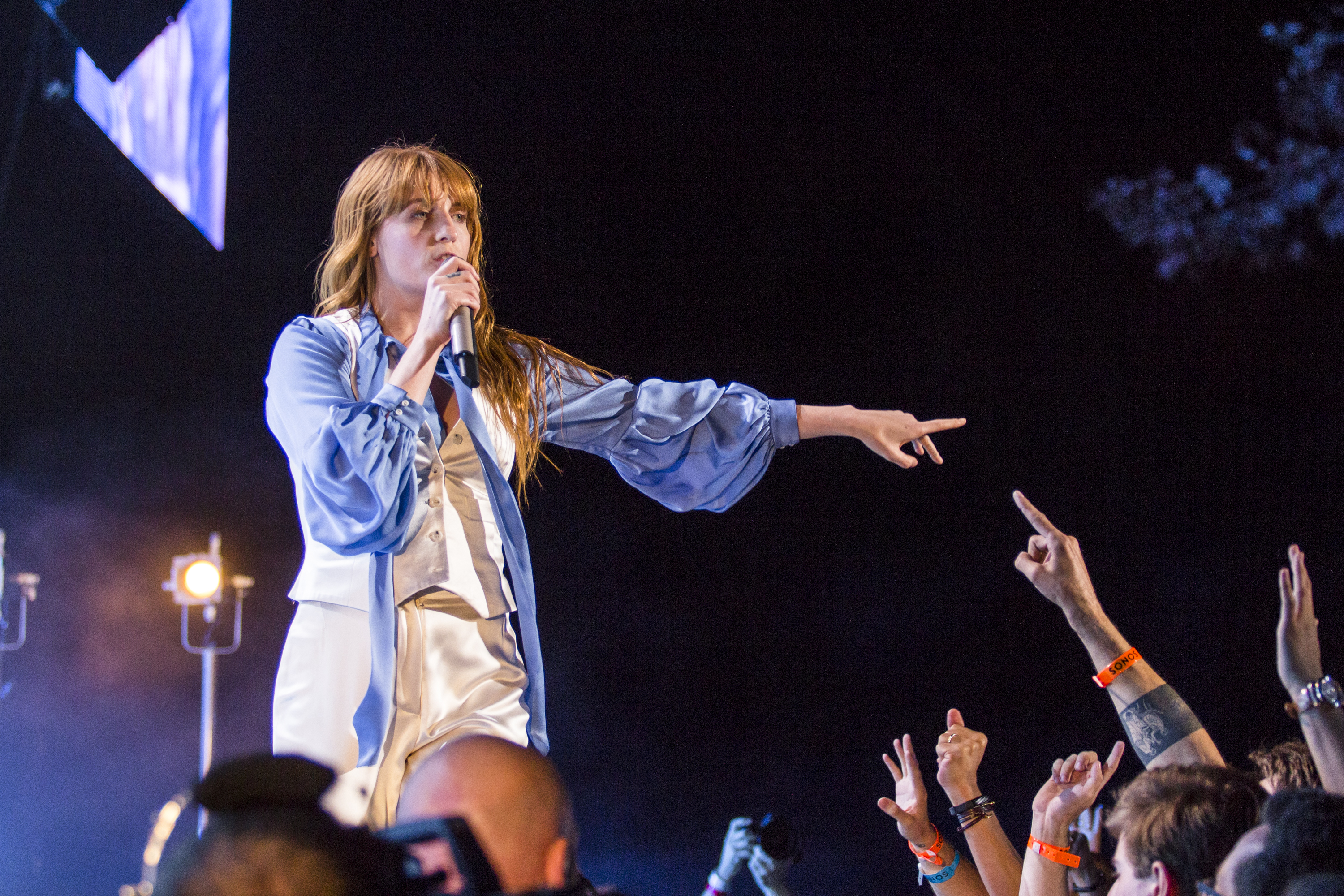 Reaching out into the audience with welcoming arms, she asked us to remove something weighing us down, keeping us on the ground. And with her triumphant cry, she freed us: “Santa Barbara, you are released!” Last Tuesday, Oct. 20 Florence graced the SB Bowl.

Welch’s newest album, How Big, How Blue, How Beautiful is a celebration of the liberty in living, one that she indeed brought to life on stage. Through her purifying sound and energy, Florence touched every soul with healing hands.

The audience varied from parents leading young children by the hand to college students, gasping as the stage darkened. Couples kissed on rock walls, girls in flowing skirts snapped selfies, middle-aged women danced before the music started – everyone was drunk in anticipation. Or the beer…

At 8:15, the stage darkened, and the back-up singers, pianist, trumpeters, guitarists, drummer and harpist silently took their places. Florence soon emerged from the wings barefoot, bathed in golden light as she stopped center stage. In the quiet, the set was in constant motion — the back-drop shimmered in the breeze, covering the stage in brilliant blue waves. As if she were singing on the sea, Florence opened the show with “What the Water Gave Me.”

The energy of her entrance continued to hold strong. During her third song, Florence dashed out into the audience, running through the aisles with a wide grin on her face as she reached out to the crowd as she glided by. After she’d finished, she stood breathless on the stage, holding an article of clothing someone had thrown. She commented gleefully that this was the earliest someone had thrown clothing to her in a performance, and that this meant it was going to be a great show.

Florence’s ability to reach out and relate to the audience was evident not only in her stunning performance, but also in the breaks between songs. She recounted her time in the United States two years ago while on her last tour, telling us of how she fell in love everywhere she went. Speaking with the upmost tenderness and respect, Florence proclaimed she wrote “How Big, How Blue, How Beautiful” about the American skies. Singing it again in the states, she brought the song full circle with an open heart and stars in her eyes.

With every song, the group brought a new meaning to the night. “How Big, How Blue, How Beautiful” was a love story between landscapes, one that she ended in a dance of rapid spinning and twirls. “Rabbit Heart” was a thrilling, practically mystical experience as Florence asked us to stand up, to jump and reach to the skies to get “as high as we can.”

It was a roller coaster of emotion. Between her unchained dance breaks, her down-to-earth stories, and her powerful vocal performance, Florence put her heart and soul into this concert. After singing one of the group’s most popular songs, “The Dog Days Are Over,” the entire group left the stage, only to come back minutes later for a two-song encore. Florence was silhouetted by golden rays, her arms spread wide as she stared straight into the crowd. A man in the back row mirrored everyone’s thoughts perfectly as he shouted, “It’s Jesus! It’s British Jesus!”

The highlight of the night, however, was before Florence sung “Shake It Off.” As if she were looking at every individual in the crowd, she asked us to remove something — to take off our burdens, our sufferings, and to throw it as hard and far as we could.

Not only did she sing to us, but she sang with us. As she did in Santa Barbara and will continue to do on her tour, Florence lives life to the fullest, and gracefully invites us to sing along.