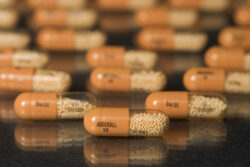 Most commonly used to treat attention deficit hyperactive disorder (ADHD), Adderall has gained popularity in recent years as a “study tool” among college students during testing seasons. Although Adderall and its counterparts Ritalin and Vyvanse are prescription medications, they are readily found throughout college campuses as students buy the powerful pill from fellow peers with prescriptions. Due to its mixture of amphetamine and dextroamphetamine, it acts as a stimulant to give users a heightened sense of focus and concentration, and may also be used to treat sleeping disorders. Despite the desired pros that make this drug highly desirable to students, its likelihood of causing physical and psychological dependence make it a dangerous devil to dance with.

According to a report by CNN, “short-term adverse consequences include sleep difficulties, restlessness, headaches, irritability and depressed feelings. Other side effects include loss of appetite, nervousness, and changes in sex drive.”

Although the short-term effects leave much to be wary of, the more daunting long-term aftermath of Adderall use is its risk for generating symptoms of dependency and withdrawal in its users. Anthony Rivas of Medical Daily describes how the medication’s likelihood for addiction is so high that it is classified among other conventionally dangerous drugs.

“Adderall sits with heroin, cocaine, and methamphetamine on the Drug Enforcement Administration’s Schedule II list of substances. That list classifies the drug as one with a high potential for abuse, with the ability to lead to psychological and physical dependence.”

Students who abuse this drug may find themselves fiending for their next pill. Soon enough, those who consistently take this drug may find themselves unable to perform daily functions without the assistance of their so-called “study tool.” Regardless of the sense of purpose and motivation acquired through the use of Adderall, its outlasting effect on the mind and body far outweigh its benefits.