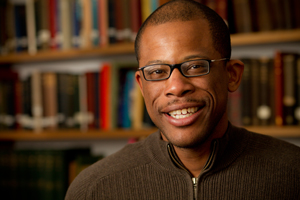 Wake Forest University Assistant Professor in the Department of Religion Dr. Ronald B. Neal will discuss how religion has influenced perspectives on Civil Rights Movement leaders in a lecture titled “Beyond the Black Messiah: Black Lives & the Limits of Heroism,” hosted by the MultiCultural Center (MCC) and the UCSB Department of Religious Studies Thursday in the MCC at 6 p.m.

Neal’s lecture focuses on the equating of civil rights leaders to “messiahs,” or religious figures, and how this has influenced modern social justice movements. Dr. Neal received his Ph.D. in philosophy and religious studies from Vanderbilt University and has published works about religion, gender, culture, ethics and politics.

“He’s intersecting that with religiosity and postulating the myth of religiosity in a specific group to that of the messiah, and kind of looking through the religious experiences of the African-American community,” Mohsenian-Rahman said. “[He is] postulating that all powerful identity and how no one can really live up to it — it’s a lot of pressure — and kind of deconstructing it from there.”

Mohsenian-Rahman said the “school to prison pipeline” is an example of the inequalities people of color face in society. According to Mohsenian-Rahman, 0.8 percent of Chicago’s municipal budget goes toward education while 40 percent funds the police department.

“We’re looking at a community that has a very large concentration of incarcerated brown and black young men in particular,” Mohsenian-Rahman said. “Those numbers can be extrapolated throughout the U.S.; those were just the numbers I had in my head this morning.”

Mohsenian-Rahman said there is no one “messiah” in the modern racial equality movement, but rather an array of people such as Cornell West, Mark Lamont Hill, Angela Davis and Michelle Alexander.

Mohsenian-Rahman said anyone who is advocating or contributing to the “Black Lives Matter” movement is continuing the legacy of previous activists.

“[They are] doing really incredible and really strong work that is ultimately for the betterment of society across racial lines,” Mohsenian-Rahman said.

Third-year sociology major Isabelle Tranner said she will be attending the lecture to learn more about race issues.

“This would be a good way to broaden my knowledge,” Tranner said in an email. “I’m new to this school, so I want to take advantage of everything offered.”

Mohsenian-Rahman said she is excited to learn how modern America was influenced by people’s expectations of civil rights leaders.

“I’m really excited to see what Dr. Neal says and how he kind of links these abstract things almost rooted in religiosity to the current social landscape in the United States,” Mohsenian-Rahman said. “I think it’s really fascinating, and it’s taken me a while to even fully understand what to potentially expect; it’s exciting.”

Fourth-year political science major Joana Barrera says she wants to attend the lecture to participate in more MCC events and to learn more about the “Black Lives Matter” movement.

“I think it’s incredibly important to gain knowledge on this topic as it is fundamental to making our community more respectful towards each other,” Barrera said in an email.