The Daily Nexus
Swim and Dive
UCSB’s Dominant Start Ends With Defeat in Home Opener
October 27, 2015 at 5:00 am by Daniel Moebus-Bowles 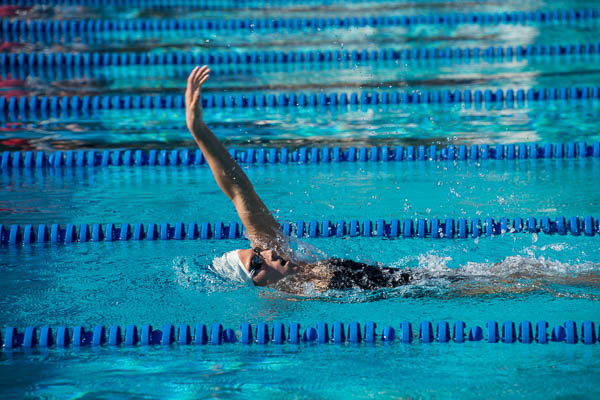 This past Friday, the UCSB Women’s Swimming team had its first meet of the season, welcoming two Pac-12 teams in UCLA and Oregon State to Campus Pool. In the three-way meet, Santa Barbara defeated Oregon State 180-76 but fell to UCLA 132-113.

With their first competition in the books, the Gauchos start off the season 1-1. The Bruins remain undefeated, having beaten both teams, and the Beavers are still searching for their first victory.

The meet started off in Santa Barbara’s favor as the Gauchos put two teams on the block in the first event of the day. The ‘A’ team, which features seniors Katie Records and Lauren Vosseler, edged out the top team from UCLA for first place in the 200-yard Medley Relay. The Gauchos beat the Bruins by less than a second, coming in at 1:44.02. Santa Barbara’s ‘B’ team finished third in the race at a time of 1:46.51.

This outright victory was just one of six for the Gauchos on this competitive day with their opponents. Along with this relay that started the meet, UC Santa Barbara took home first in the final event, the 400-yard freestyle relay, as well. Led by sprinter Vosseler, the ‘A’ team of the Gauchos topped the event with a time of 3:24.20.

Vosseler not only found herself atop both relay events but was able to get it done on the individual side as well. She added her third win of the meet with a victory in the 50-yard Freestyle with a time of 23.46. She dominated the event as the only athlete to come in under 24 seconds.

Records, a strong breaststroker, added some individual success of her own in her usual events on the day. She started in the 100-yard breaststroke, where the fifth-year Gaucho beat every opponent by more than a second, coming in at a time of 1:03.82. She doubled up on wins just a few events later in the 200-yard relay, where she topped the event with a time of 2:18.01. She finished her day taking second in the 200-yard IM event, coming in at 2:07.42 and beating the next best opponent by nearly three seconds.

One of the new faces of Santa Barbara, transfer junior Cheyenne Low, got to see her first time in the pool as a Gaucho and did not disappoint. She won her first event in the 100-yard backstroke with a time of 55.85. Low also contributed to both of the team’s relay wins to put them over Oregon State in the meet and just short of the undefeated UCLA.

Santa Barbara will look to their next meet on Oct. 31, where both the men’s and women’s teams will travel to Cal Poly San Luis Obispo for a duel meet. The Blue-Green rivalry will be renewed at noon on Halloween at Cal Poly.