The Daily Nexus
Water Polo
UCSB’s Offense Dominates Spartans, Comes Up Short Against Stanford in the Fourth
October 26, 2015 at 3:43 pm by Jorge Mercado

The No. 6 UCSB men’s water polo team had another weekend in which it came up short of an upset victory against a formidable opponent. After their match at San Jose State, the Gauchos traveled to Palo Alto to face off against No. 5 Stanford. UCSB shared a similar fate to the last two weeks as it came up a couple of goals short of an upset, losing 10-8. 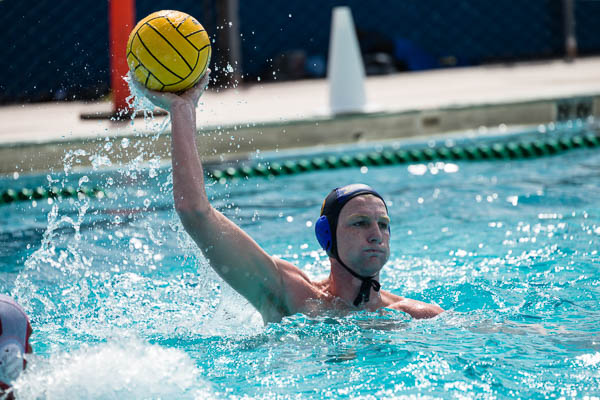 The identical win/loss total still keeps the Gauchos at a very respectable 13-8 overall record with a 2-4 record in conference play. Struggles continue for the young San Jose State team as it has lost 10 of its last 11 matches, the Spartans currently own a 3-18 overall record to go along with their 0-5 record in MPSF play. Stanford improved to 15-6 overall and picked up its first conference win of the season, making the Cardinals 1-3.

UCSB knew that if it wanted to beat Stanford, its defense would need to stop Stanford’s star senior driver Bret Bonanni. Unfortunately, this task proved to be too daunting for any defense, even one as great as the Gauchos.

The action began with the Gauchos taking a commanding 2-0 lead to start the game thanks to goals by senior attacker Derek Shoemaker and junior attacker Mitchell Hamilton. But the Cardinals responded as Bonanni countered, scoring two goals of his own to tie the game and end the first quarter tied 2-2.

Redshirt junior driver Adam Abdulhamid continued the Cardinals’ offensive success by scoring two goals to take a 4-2 lead. UCSB managed to claw its way back into the match with goals by Shoemaker and junior utility Reed Cotterill, tying the game up 4-4 in the final minutes of the half. However, just as the final seconds ticked down, Bonanni scored his third goal of the match with 14 seconds remaining in the half to give his team the 5-4 lead heading into the break.

The hard fought match continued into the third as both teams were limited to one goal apiece, making the score 6-5 heading into the final frame. Stanford took complete control in the fourth period, scoring three goals to increase its lead to 9-5. Saturday’s match was another example of the Gauchos’ struggles in late game situations as they were outscored in the fourth. Bonanni ended any chances of a comeback with his fourth goal of the game, sealing the win for the Cardinals at a final score of 10-8.

Although Santa Barbara was unable to pull off the upset yet again, the Gauchos continue to prove they cannot be taken lightly. Sooner or later the right opportunities will come for UCSB to pull off a great upset, however, for now the No. 6 team needs to focus and play the way they did against San Jose State on Friday.

Prior to the tough loss to the Cardinals, UCSB faced off against the reeling Spartans at their home pool. It was the first time in 34 years that the Gauchos have gone to San Jose State to play a water polo match. The game started slow with both teams scoring one goal in the first making the score 1-1.

The Gauchos hit their stride in the second quarter, scoring three consecutive goals by three different players, including one by junior utility Tor Jensen, who was celebrating his birthday on Friday, to take a 4-1 lead in the half.

Cotterill opened the second half scoring his second goal and extending the lead to four for the Gauchos. At one point UCSB led by a score of 7-1 thanks to goals from sophomore attacker Shane Hauschild and junior two-meter Anthony Buljan.

It should also be noted that senior goalkeeper split time in the cage Friday with sophomore Liam Lenihan. The young goalkeeper was able to register an impressive 12 saves while Whitelegge registered eight of his own and helped a bit on offense registering one assist.

Once again the Gauchos end another weekend feeling both confident and disappointed. Getting their second conference win of the season was a big accomplishment and keeping up with No. 5 Stanford is impressive but UCSB is not satisfied. Santa Barbara keeps proving week after week it can hang with the best teams in the MPSF, but the Gauchos hope to prove they can beat the best.

Santa Barbara’s next match is Saturday, Oct. 31st at home versus UC Irvine at 12 p.m.