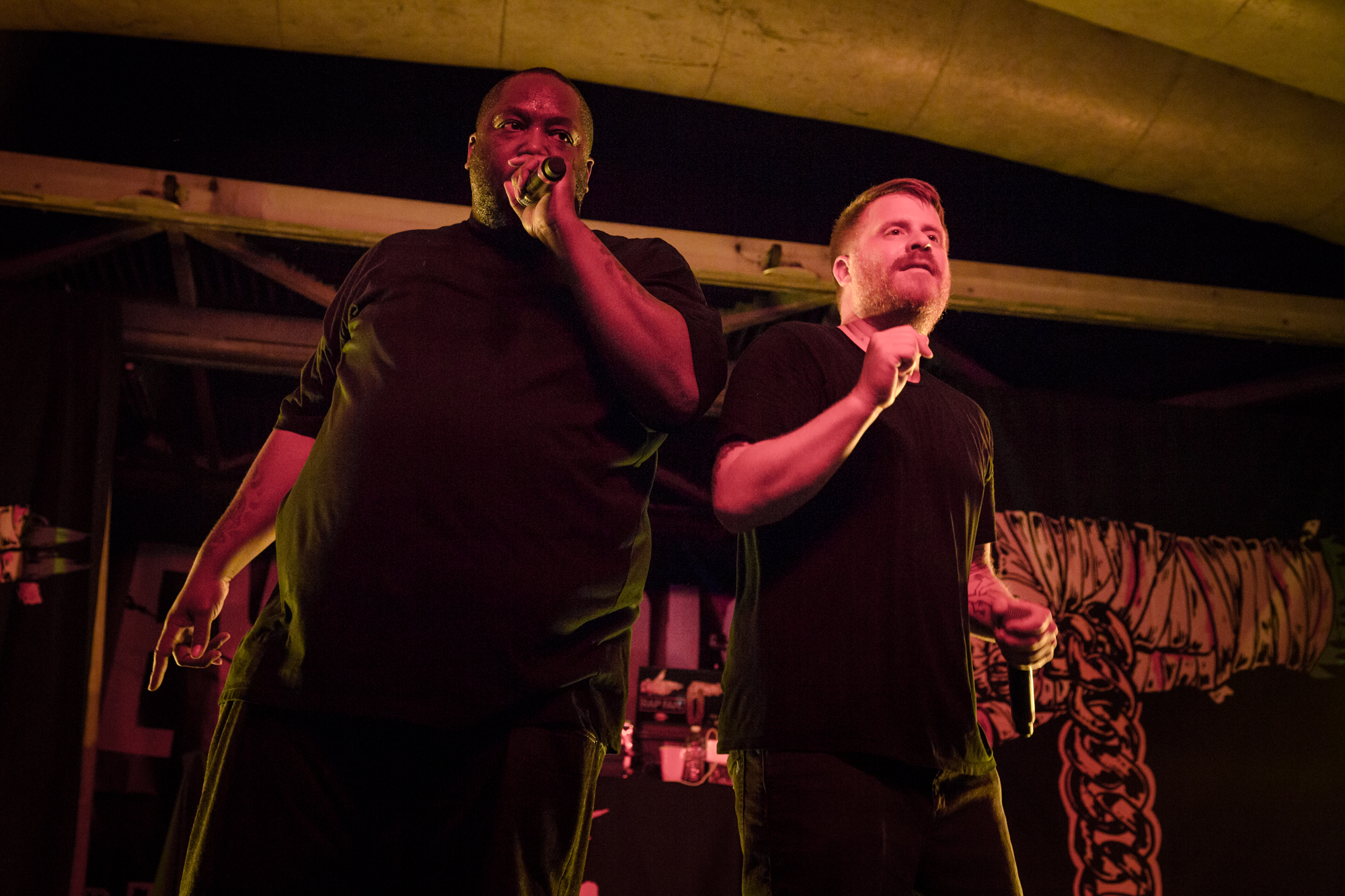 After an entire weekend full of upbeat and fresh music shows, the New Noise Festival concluded with their Block Party at the Funk Zone featuring Gardens & Villa and Run the Jewels, on Sunday, Oct. 18. Bustling food trucks lined the venue, which spanned a small outdoor stretch of parking lot.

The audience was fairly heterogeneous. In one corner of the venue, a visibly annoyed high school student tried to escape his hovering mother. In another section, an elderly couple slowly crept towards the main stage. Most of the young adults congregated at the beer garden.

Lynch unexpectedly punctuated Garden’s colorful set with his flute. Projections of spindly spiders on the wall accompanied the Lynch’s flute.

Before Run the Jewels went on, some fans rushed to the front to ensure that anyone who was less than six feet tall had a very difficult time seeing anything other than a sea of shoulders and heads. Adam Schmidt, a second-year computer science major, UCSB’s College of Creative Studies said, “The sound guy came up and did sound checks for 15 minutes which were punctuated by his ‘Yeahs’ and ‘Alrights,’ sounding like a slightly more decipherable Lil John record stuck on repeat.” The man onstage instead “seemed to be doing his job of hyping pretty well, as soon the fans were cheering loudly for Run the Jewels,” Schmidt said.

Finally, RtJ MCs El-P and Killer Mike made their grand appearance, in the process driving some fans into a frantic mosh pit in the middle of the audience. The duo opened up not with one of their own songs, but instead led the crowd in a rousing rendition of a “We Are the Champions” sing-along, while El-P proclaimed that he had gained superpowers from all of the weed he smoked before the show.

Run the Jewel’s set had no shortage of vulgarity — middle fingers and drug references were staples throughout the night — but the duo did not hesitate to voice their political opinions or call out fans who they felt were restricting anyone else’s enjoyment. Killer Mike and El-P made their disapproval of the government clear, and told a daring photographer who saw fit to climb the railing that he had to move because “[the photographer’s] dick is in kids’ faces.” These instances where the duo spoke what was on their minds served to amp the crowd’s excitement to a higher level than it already was.

To add to the energy, the chemistry between the rappers was palpable. “Honestly I heard they were really good performers before and they pretty much kept up with that reputation; the energy was really good and they were hilarious,” Chet Manley, a UC Santa Cruz graduate student, said. “Killer Mike and El-P are adorable together; they totally had like a bromance thing going on.” The end result was that nobody in the crowd ever stopped moving — the guys in the mosh pit went from pushing each other around to punching each other in the face, and everyone else quickly forgot any inhibitions they may have had about dancing in front of strangers.

Eventually, after a much requested encore, Run the Jewels finished their set and left the stage, leaving everyone in the audience with dazzling memories and sore bodies. “In essence, Run the Jewels captured the spirit of the crowd and ran f*cking laps with it … Well worth 25 dollars and far cheaper than a diamond necklace,” Schmidt concluded.