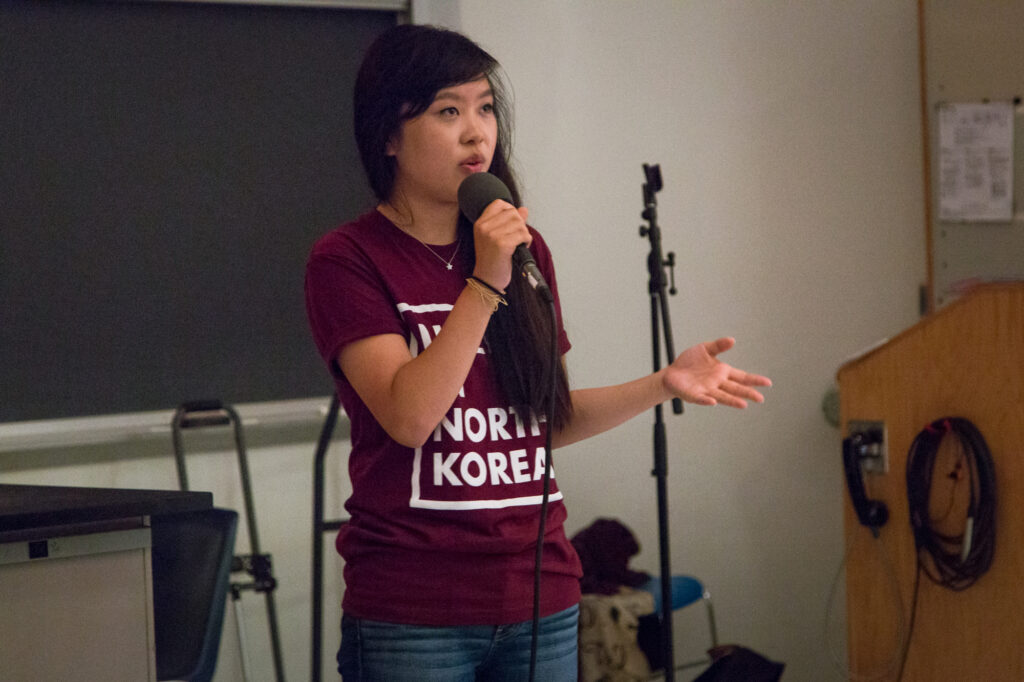 LINK is a non-profit organization providing resources and transportation to help refugees escape North Korea. At Friday’s event, representatives discussed conditions in North Korea, the challenges of escaping the country and how the organization aids refugees.

LINK member John Park said North Koreans are “just like you and me” but come from very different circumstances.

“There’s 24 million people in North Korea, full of hopes, dreams, families and relationships,” Park said. “The only difference is between here and there; they are living in one of the most suppressive countries in this world today.”

“They tell them that the outside world is full of stress and enemies and they have to put their faith in their leaders,” Park said. “Their regime puts forth incredible time and resources to make people believe in their strict version of socialism.”

According to Park, the North Korean government controls its citizens through censorship and isolation.
“To prevent their people from seeing the outside world, North Korea has an information and media blockade,” Park said. “They cannot make international phone calls, they are banned from foreign radio or watching foreign television.”

Park said there is little resistance to the Kim dynasty’s rule because of the severe penalties in place for dissonance.

“If you are suspected of defying the regime, they conduct harsh interrogation with you and your entire family and may place you in a political prison camp,” Park said. “The estimated number is 80 to 120 thousand people kept in these prisons, including entire families. We’ve heard the regime uses torture, starvation, and even execution in order to keep people in line.”

According to Park, thousands of North Koreans have escaped to China since the 1990s as a form of “quiet disobedience.”

“Unfortunately, the direct travel to South Korea is blocked by the DMZ, the Demilitarized Zone, so thousands of North Koreans travel to China,” Park said. “But even if they make it to China, the Chinese government does not recognize North Koreans as refugees.”

Park said if refugees are caught by the Chinese government, they are deported to North Korea where they may face forced labor and torture.

“If they get caught, they will be sent back, and there, they will be faced with grave punishments for leaving the government,” Park said.

“You only live on Earth once; I want to live it in freedom,” Sung said.

“I’ve always wanted to bring this organization to my campus, and I finally did it in college because I feel like it’s a really good organization and, like, they have a really great cause,” Athena said. “Since we have the materials to help them with, I feel like we should all try to participate. I hope this event spreads awareness on their cause and their organization.”

“I’m glad to see a group is doing something to potentially be political but doing it for the people,” Chang said. “I feel like it’s hard to convey a non-political stance these days. So their efforts to resettle North Korean refugees is really amazing.”

“I just knew that it was hard living in North Korea and they didn’t have rights, but I feel more informed,” Kim said.

Third-year biology major Peter Dang said although the issues discussed at the event are geographically distant, the UCSB community should participate in a solution.

“We can still make a difference and be able to make life better for people that we will never meet and for a cause that is important to those people,” Dang said.