The Daily Nexus
Volleyball
Gauchos’ Inability to Close Leads to Disheartening Losses on the Road
October 25, 2015 at 11:48 pm by Sean White

While its upside in the coming years looks promising, current difficulties concerning youth and inexperience illustrate the regressions of the UCSB women’s volleyball team throughout this season.  After ending its 11-match losing streak with two victories last weekend, the Gauchos find themselves back in a losing slump amid losses to Cal State Northridge and Long Beach State.

“I think we get a mental block,” senior outside hitter Ali Barbeau said. “We don’t stay aggressive enough most times. Part of it is inexperience, but even the seniors have a tendency to get tentative when it gets tight instead of being aggressive and trying to close out games.” 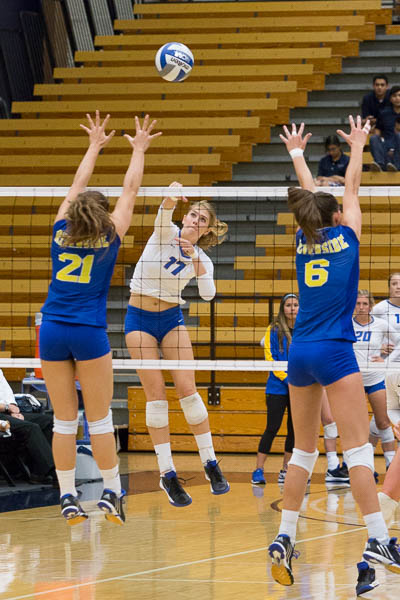 Saturday’s epic five-set battle between UCSB and CSUN was perfect exposure for an underrated Big West conference as the match was nationally televised on ESPN3. Despite being able to win the opening set in various matches this season, UCSB entered Saturday’s match 3-4 in games, in which it won the opening set — but never had the Gauchos lost with a lead of two sets.

Arguably giving their best performance in a set this season, the Gauchos started with a 25-8 rout of the Matadors to open the match. CSUN absolutely had no match for the UCSB’s bruising offensive attack. Free of errors and a total of 10 kills, Santa Barbara had an astonishing .667 hitting clip. Continuing her phenomenal serving performance from the team’s previous contests, senior opposite Jaylen Villanueva notched four of her match-high six service aces in the first set, igniting UCSB’s season-high finish of 12 aces to help the Gauchos take a 1-0 lead.

UCSB’s dominance continued in the second set as it followed its dynamic attacking clip with a .393 hitting percentage. Leading the Gauchos’ offensive charge was its barrage of hitters: Barbeau, senior opposite Britton Taylor, and junior middle blocker Phoebe Grunt.

The trio combined for 33 of the team’s 51 kills; Barbeau finished with a match-high 14 kills. Taylor ended with nine kills and a .368 attack percentage while Grunt had 10 kills in addition to her .529 hitting clip. Tied 11-11, a kill by Villanueva handed Santa Barbara its first lead in the second set and sparked the Gauchos’ 6-2 run, forcing two CSUN timeouts. In spite of the Matadors attempt to recuperate, UCSB would go on to take the 25-19 win to increase its lead to 2-0.

While UCSB’s offense flourished, clocking a .488 hitting average in its two set victories, its defense prohibited the Matadors from gaining any offensive chemistry by holding CSUN to hitting clips of -.182 and .088. The Gauchos allowance of just eight points in the first set is the team’s lowest opponent point total of the season.

Halting the Matadors’ attack attempts at the net were Taylor, Grunt, and junior middle blocker Elizabeth Sheffield.  They accounted for the team’s three solo blocks with one apiece and were responsible for 16 of UCSB’s 26 block assists.

With Santa Barbara outhitting Cal State Northridge with a kill average of .254 to .164, the Matadors’ comeback seemed impossible as they were on the brink of being swept.

Down 0-2, allowing an 8-1 UCSB run to open the third set, it was plausible that a repeat of the first set was destined to occur. However, trailing 4-10, the Matadors’ 7-0 scoring stretch allowed them to take an 11-10 lead. Despite one lead change in which the Gauchos led 14-13, Northridge eventually regained the lead and captured the 25-21 set victory to trim the Gauchos’ lead to 2-1.

A late 7-2 rally in the closing of the fourth set helped CSUN edge UCSB for the 25-23 win and 2-2 tie. With the momentum on their side, runs of 9-2 to open the fifth set and 5-1 to conclude it earned the Matadors their 3-2 come-from-behind victory.

Guiding CSUN in its three-straight unanswered set wins were outside hitters senior Cieana Stinson and junior Julie Haake, who each had 13 kills.

Prior to Saturday’s duel, UCSB’s loss at Long Beach State simply came down to the seemingly unstoppable success of the 49ers’ offense. Long Beach overpowered UCSB with a .374 hitting clip, earning a .472 attack percentage in the match’s final set. A total of three 49ers hit over the .500 mark, one of them being freshman outside hitter Carly Beddingfield, who recorded a match-high 12 kills in support of Long Beach sweeping UCSB.

UCSB ended the match with a sufficient .231 hitting clip but had no players with double digit kills. In spite of having substantial leads for the majority of the first and second sets, the Gauchos’ inability to maintain their leads aided the 49ers in their straight sets victory.

“I think we played a good match. But there were times where we were up and we should have closed it out,” Barbeau explained. “That’s an issue that we face as a team. Long Beach is a good team, second in conference, and we put up a good fight against them.”

For the second consecutive week, sophomore outside hitter Chanel Hoffman was inactive due to injury.

Santa Barbara gets its chance to host the classic Blue-Green rivalry this Thursday, Oct. 29, when the Cal Poly Mustangs visit for a 7 p.m. matchup in the Thunderdome.

This was a match where I thought CSUN was going to be defeated by UCSB, but in the end was glad that CSUN won. UCSB had two different teams on the Matadome court and so did CSUN. It has been a very long time since I have seen two teams go in different directions from the start to the end of the match. There were lots of ugly moments and some great ones as well during each sets(especially the first one for CSUN). Glad that CSUN turned it around, picked-up their game level and determination to win this match. Anything… Read more »