The Daily Nexus
Water Polo
Gauchos Confident in Extending Their Success on the Road
October 23, 2015 at 5:00 am by Jorge Mercado

The No. 6 UCSB men’s water polo team has a great opportunity to pick up some much needed conference wins this weekend when it takes on San Jose State and No. 5 Stanford, who both have yet to record a conference win.

The Gauchos head into the weekend with a solid 12-7 overall record and a 1-3 record in MPSF play. San Jose State has struggled this season with a 3-15 record and 0-3 start in conference play while Stanford has the best overall record of the bunch at 14-6 but has struggled in MPSF play at 0-3. The Cardinals are currently in a slump, having lost their last four matches. Santa Barbara is currently sitting in seventh place in the MPSF standings while SJSU and Stanford are both tied for last place.

“I think we are playing really good water polo right now,” Head Coach Wolf Wigo said. “We are on a roll right now. We lost to a top-notch program but it was hard-fought; if we can play like that we will come back this weekend with two wins.” 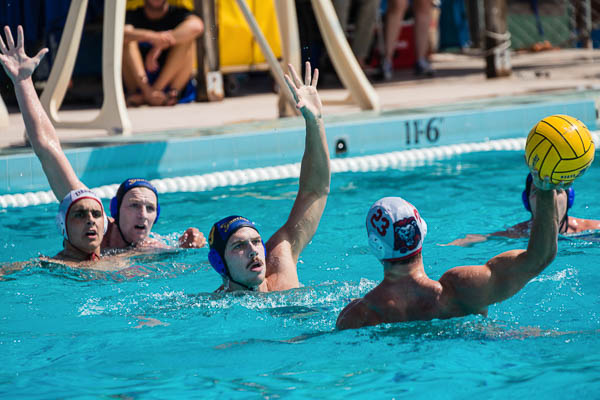 Despite losing eight of its last nine matches, San Jose State’s denial to concede to defeat makes the team a challenging competitor. Key players for the Spartans include freshman driver Justin Contreras and sophomore two-meter defender Igor Miljan. The young players are the leading scorers for SJSU, with 19 goals and 18 goals respectively. One possible reason for the Spartans’ troubles this season is their lack of experience. SJSU is currently the only MPSF team that has no senior on its roster.

A big breakout player to keep an eye on this weekend for the Gauchos is Derek Shoemaker. The senior attacker became the leading goal scorer for UCSB with 28 goals. He had a great weekend in which he set a new career high for himself with four goals in one game against LBSU. However, Shoemaker is more than just a scorer. He is also the team leader in field blocks with 11, third in assists with 11 and fifth in steals with 14.

“I like to bring everything to the team,” Shoemaker states. “I’m not trying to score all the goals — me and my teammates just want to stay aggressive. We have a bunch of great players on this team. I just like to do anything I can.”

However, the number one weapon for the Gauchos continues to be senior goalkeeper Chris Whitelegge, the MPSF leader in saves per game with 10.7. UCSB is a team that continually preaches great defense and proved it last weekend, holding the No. 2 Trojans to their second lowest scoring total of the season by surrendering just six points. The senior played a big role not only in that game but in every game as he continues to prove he is one of the best goalkeepers in MPSF history.

The senior goalkeeper will need to play especially well when the team travels to face Stanford and the MPSF leader in goals scored Bret Bonanni. The senior has scored 58 goals this year and is also the only player in MPSF history to have two 90-goal seasons. The 2014 FINA Men’s Water Polo Player of the Year is also eight goals away from becoming the leading scorer in MPSF history.

“We know who he is,” Wigo said. “And we are going to be aware of where he is at all times. In a way it makes it easier, since we know who to focus on, but it will still be tough.”

Stanford’s other key offensive weapon is Adam Abdulhamid. The redshirt junior driver is second on the team with 45 goals scored. The Cardinals’ staggering offense has scored an astonishing 303 goals this season. The last time these two teams met was one year ago in which Stanford won 13-6.

While not facing a must-win situation, victories this weekend could be a substantial jump for the Gauchos becoming a true contender in MPSF play. Although both matches are away, UCSB is unbeaten on the road with a 2-0 record.

“We feel good about these games,” Shoemaker said. “Obviously we love to play at home but we are going to go in there and play the same way.”

“It’s not a big concern to us,” Wigo added. “We won’t have our big home crowd, but it’s not like we are going into the Roman Colosseum — we just have to focus on what we are doing and we will be okay.”

UCSB’s bout at San Jose State will begin at 2 p.m. on Friday, then Santa Barbara will travel to Stanford to play the Cardinals at 12 p.m. on Saturday, Oct. 24th.