The Daily Nexus
Music
A Cuba-America Line That Actually Works
October 23, 2015 at 12:47 pm by Artsweek Editor 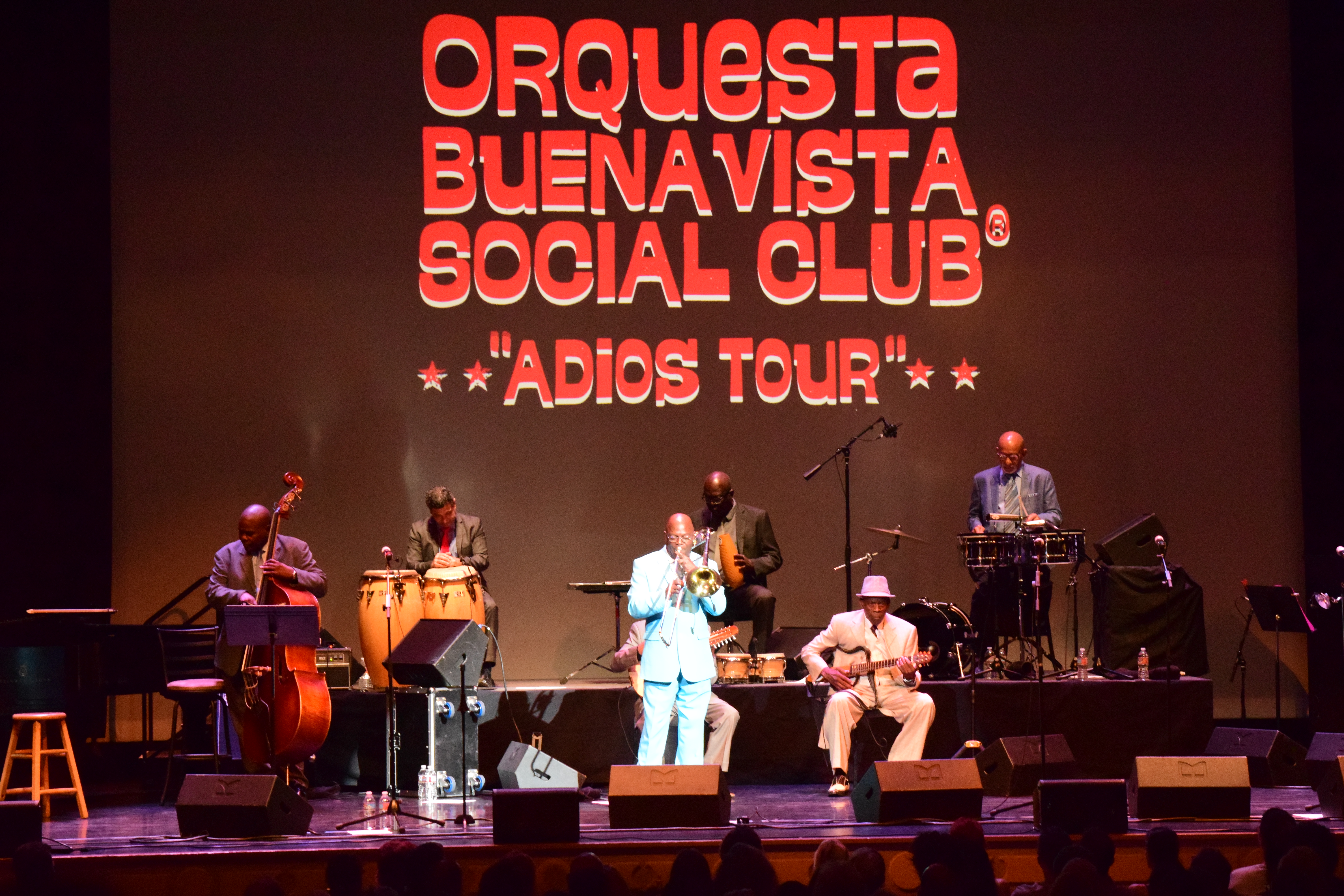 The temperature was in the eighties and a soft wind only partially helped with the damp, clingy air on Tuesday night. Bright lights extended over the sidewalk, overarching and blanketing a piece of State Street. A warm night and a gentle breeze blowing through downtown Santa Barbara set the perfect atmosphere for a night of Latino music and energy.

The regal decor of the Granada Theater felt foreign and out of place. A semi-outdoor venue with café-style seating and a makeshift wooden dance floor seemed a much more apropos locale for such an event. Walking into The Granada slightly diminished the Latin vibes, but not for long.

Soon after 8:00 p.m. a lone pianist, Rolando Luna, stepped on stage and took his seat at the piano in the corner. Dressed all in black, he began to play simply and easily. Immediately the sense of a spirited and cultured community was felt throughout the audience. A screen situated farther upstage projected images exhibiting the history of the club and the band. Pictures of deceased band members filtered from old photos and video footage filled the screen, highlighting certain performances and moments in the history of the organization.

After about 20 minutes a handful of people were already loosening up the tightly-knit seating at the theater, twisting and turning as the music carried them. “Hup! Hup! Hup!” repeatedly resounded from the stage as Carlos Calunga’s voice reverberated throughout the space. Within 40 minutes, the majority of the crowd were caught moving their feet to the rhythm and beats. The pit was a sporadic flurry of dancers and “sitters.”

Most of the concertgoers were older people, although there were many generations there — children with parents attempting to send their musical tastes down the line and young adults who’d already learned from their parents. However, no age could detain the insane urge to move one’s hips and throw one’s arms high above. Very soon it became obvious that every track was a crowd favorite, especially “Chan Chan” and “Candela.”

Not only was it obvious that these musicians were among the best, but they also unexpectedly engaged the crowd. They played a smooth jazz version of “Somewhere Over the Rainbow” and involved the crowd in singing the lyrics, although there was a lot of pauses and “la da-da-da da dah’s,” interrupted by nervous, yet joyful, bursts of laughter.

The Social Club was extremely humorous on stage as well. Ramos, who had a large hand in leading the group, playfully pointed out members in the crowd. He also flirted via trombone with a particularly dance-crazed woman in the audience. Torres, who masterfully fiddled the laúd all night, challenged Calunga to a laúd play-off. Torres ended up winning by playing the instrument behind his back, as Calunga held it for him. The Social Club transcended the barriers of age, and the impeccably, almost overpowering energy emanating from the band was palpable through every pore.

Enter Omara Portuondo, the member with the strongest stage presence despite being one of the oldest. As soon as she entered the stage, she captivated the audience so actively that, disregarding the one slow song she played, the crowd stayed dancing for the rest of the show. Not only was she able to control the stage while performing fast or slow tracks, she dominated the venue.

If she told the crowd to sing along, they did. When she told us to get up and dance, clap their hands, circle their hips, whatever it was, we immediately obeyed and could not be happier. Upon her entrance into the show, she instantly ignited The Granada, transporting it and everyone inside back to Havana, Cuba. She inspired the entire crowd to sing along to “Besame Mucho,” coordinating an accompanied duo consisting of her singular true voice and a blurry echo. She danced throughout the stage, flicking and swirling her wrists, while effortlessly sliding from song to song. Almost stopping the show at one point out of pure pride, she introduced her husband, the rhythm guitarist Papi Oviedo. His pleasure and joy came through when he stopped playing and stood up to dance with Portoundo.

When asked to speak on the show he just performed, Ochoa said simply in Spanish, “I’m sorry, no time, because we have got to go play the White House tomorrow.” They will be the first Cuban band to play in the White House in fifty years. The culture exuded from these amazing and experienced musicians made this reporter feel the Buena Vista Social Club. This is where the Latino fiesta that spun the world dancing began.