The Daily Nexus
Sign of the Times
The Power of Polarization
October 22, 2015 at 5:44 am by Hayden Plunkett 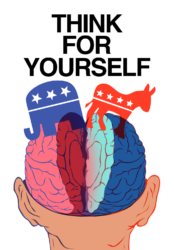 John Adams had this to say about polarization: “There is nothing which I dread so much as a division of the republic into two great parties, each arranged under its leader, and concerting measures in opposition to each other.” Does this not sound like the world we live in today? We have grown accustomed to a world where it seems that we have to choose between two political parties: Republican and Democrat. Democratic and Republican presidential nominees are discussed nearly 24/7, but do you even know the names of any Independent candidates? Green Party candidates? My bet is that you don’t. This is because we are dominated by two opposing parties, both violently degrading one another. These parties not only disagree on how to solve America’s issues; they disagree on what the issues are.

The polarized, two-party system that we live in today makes it nearly impossible to pass anything in Congress. If Republicans want something, the Democrats will deny it. If Democrats want something, the Republicans will deny it. You might be saying to yourself, “Yeah, polarization is a problem, but it’s nothing compared to…” If that’s you, then consider this: how are we going to solve any issues if we can’t agree on what the issues are? If Republicans and Democrats continue to block each other’s bills, how are any laws going to be passed?

Getting rid of polarization and the two-party system is easier said than done. We have been raised in a society that, for the most part, only exposes us to two political parties, and forces us to choose between these two. It’s psychologically difficult to get rid of that idea. It’s difficult to change the beliefs of people who have been raised by those very beliefs. Ending the two-party system would require changing these very beliefs, and on a mass scale. Although this is a substantial undertaking that will likely take an extraordinary amount of time, I believe that there are three crucial first steps.

The first is compromise. We need to elect politicians that are willing to compromise with their opposition. Politicians that can see that half of a success is better than no success at all. Politicians that can see that helping the other side is not a failure if, in the end, it benefits your side as well. In politics, compromise is generally seen as a bad thing — it shows weakness. It shows that you don’t have the ability to be a leader. But what good is leadership if you have nothing to lead? What good is leadership if you have no ability to solve the problems of those following you?

The second step is open-mindedness. It is often said that Democrats are the “open-minded” party, but I have seen just as many close-minded liberals as I have close-minded conservatives. In fact, there is a psychological study conducted by Jonathan Haidt that appears to say that conservatives are the actual “open-minded” ones. Whether or not this is because Republicans are more used to defending themselves than liberals, I do not know. But what I do know is that both sides, Republicans and Democrats, need to take a more open-minded approach. Despite what that psychology study says, I have seen both parties refuse to consider the perspective of the other, and I have seen it far too often. If more people began to actually consider how the other side saw things, then maybe, just maybe, we would have more bipartisan agreement in this nation.

The final step, I would argue, is to think for yourself. Consider why you have the political beliefs that you have. Is it because that’s what your parents believe? Or what your friends believe? If that is true, then you haven’t truly formed your own opinion.

And that is dangerous.

Awesome article Hayden! I completely agree with you. Most of the people in the USA fall somewhere in the middle of the political spectrum, yet “independents” like Jim Webb and Rand Paul simply never become viable presidential candidates.