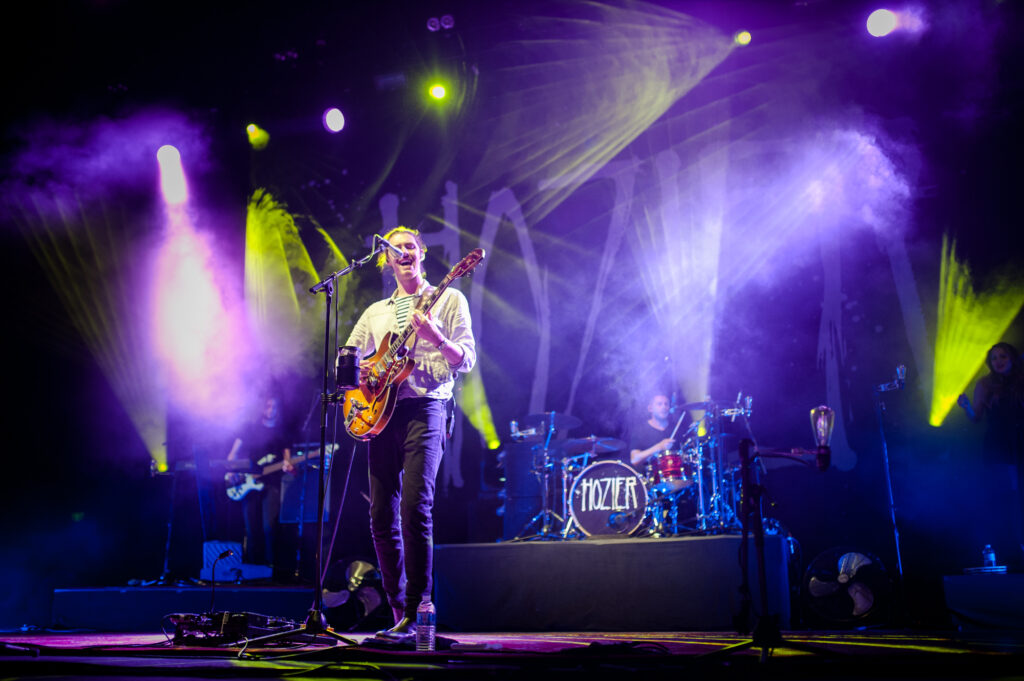 Literally. Not trying to sound like a character from “Fast Times at Ridgemont High,” but Hozier left his fans looking for more. The Irish singer-songwriter’s visit to Santa Barbara on his debut solo tour was filled with hopes and promises of a potentially incredible night. However, the concert fell short in duration because the set time was only one hour and 20 minutes long. The show felt like a music festival set, due to his single LP discography. Nonetheless, Hozier’s soulful voice still mesmerized the audience through his personally written and produced songs.

At approximately 8:10 p.m., the stage lights dimmed to indigo colors and the seating area slowly faded to black. Hozier walked up to the microphone while carrying his electric guitar. The opening song, “Like Real People Do,” spoke of endless possibilities of a new romantic relationship while retaining the memories of past experiences. Some of the standout songs from the set list include, “Angel of Small Death and the Codeine Scene,” “Someone New,” “It Will Come Back” and “Arsonist’s Lullabye.” As the show continued, Hozier’s next song, “In A Week” had a special guest duet from none other than his right-hand cellist on tour, Alana Henderson. Together, they sang a beautiful love song that resonated across the stage to the lovers who were in the audience.

In an exclusive interview with Daily Nexus before the concert, Irish folk singer Henderson sat down and talked about supporting the “Take Me to Church” phenomenon on tour. The 27-year-old was offered a chance to perform with the then up-and-comer.

“A year and a half before I started playing with Hozier, I was asked to support him and open a show when he was playing in my home city, Belfast,” said Henderson.

Unfortunately, due to a prior commitment, the songwriter wasn’t able to make the gig. “But then, a year later, someone from his record label remembered who I was and needed a cellist who could sing the female soprano parts,” she explained.

“They needed people who could double up — like a key player who could also sing the backing vocals.”

Within a week of meeting with Hozier for discussion, the Belfast native packed her bags and donned her best Penny Lane impression.

Coincidentally, Henderson fell in love with “In a Week” the first time she heard it.

“I remember hearing it as I was going through material for the tour and thinking it was an insanely wonderful song, hoping that I’d get a chance to sing it,” she said. “In that week of rehearsal before we took off on tour, Andrew [Hozier] threw it out and said, ‘Do you want to give it a go and sing it?’ I did, and it worked pretty well… it’s my favorite part of the show!” When asked about her fondest memory on tour, the singer-songwriter shared, “performing at the Grammys with Annie Lennox was mind blowing.”

At the end of the day, Alana Henderson is happy and appreciative to share the stage with a great mentor, “to play with someone who’s exceptionally talented and really just off the charts…I guess that has been my biggest break to date.”

One of the surprise moments of the night came in the form of a cover of Ariana Grande’s “Problem.” In contrast with the serious nature of his own songs, the rock remix of Grande’s tune gave the concert-goers a chance to lighten the mood. But after all, fans were awaiting a religious experience, and six-foot-five talent was there to bless the crowd. That true religious experience came when the crooner blessed the crowd with the opening lines, “My lover’s got humor/She’s the giggle at a funeral.”]] People chanted and yelled the hit song as if it was their mission to be heard. Many thought the singer would end the night with the chosen song, but Hozier was quick to prove them wrong.

After thanking everyone on his tour, from the band to the light support, the Irish native walked off stage. Fans were sad to see him leave, but Hozier came back with nothing but a guitar for a final encore.

For the icing on the cake, the 25-year-old closed out his concert with “Work Song,” a dedication to a lover who has saved him from his troubles. After the band bowed to the audience and the applause came to silence, fans left the Bowl with a renewed appreciation for the old blues. Even though the concert was shorter than was expected, Andrew Byrne-Hozier’s talent is undeniable. With such a level of talent, Hozier is on his way make a legacy for himself with every lyric and melody that he creates.

Great interview and I lived in the Seattle area for 12 years. The rain did get to me after a while but I still love to visit. I was much younegr and I think now that I know myself a little better, I have the tools to be able to handle the rain and dreariness that is sometimes a part of the Pacific Northwest. About this subject, Robin Lakoff wrote a great article in 1974 entitled You Are What You Say on this very topic. It amazes me that women are still struggling with verbiage and inflection in language.[]