The Daily Nexus
Sports
Gauchos Drop Second Straight in Front of Near-Record Crowd at No. 20 Cal Poly
October 19, 2015 at 11:46 am by Michael Jorgenson 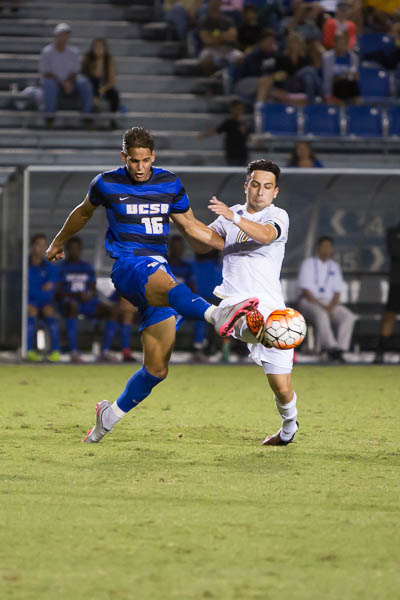 Kevin Feucht battles the ball away from a defender. Dustin Harris/Daily Nexus

The No. 19 UCSB men’s soccer team dropped its second straight game on the road this past Saturday, falling 3-2 in double overtime to No. 20 Cal Poly.

Still leading the Big West North Division are the Gauchos at 9-5-1 overall and 4-2 in conference. The Mustangs, who are now just one point out of first place with the win, improved to 8-3-3 overall and 3-1-2 Big West. The two teams will play each other once again this upcoming weekend in Santa Barbara.

The Gauchos knew their good run of form couldn’t last forever, but they couldn’t have predicted that they would be in this position after the way they were winning games prior to the last week. They entered the game at Cal Poly coming off a disappointing 5-2 loss to Sacramento State, but that motivation wasn’t enough to get them the win in a hostile Mustang environment.

As this matchup always seems to do, the game between the Blue-Green rivals lived up to the billing. An action-filled 103 minutes of entertainment in front of the 12th largest regular season crowd in NCAA history found the opposing sides deadlocked at two goals apiece before Mustang junior defender Kody Wakasa ended it in the second period of extra time.

UCSB had just lost junior midfielder Josue Espana to his second yellow card before conceding a corner for the fifth time in the game. Having just come in off the bench, Cal Poly junior defender Jack O’Connor sent in a cross towards the near post that found Wakasa, who was able to flick in a shot towards the far post.

The goal, which was the first of Wakasa’s career, could not have come at a better time, as it now puts Cal Poly tied with UC Davis just one point behind UCSB to challenge for the No. 1 seed in the North.

Prior to the final shot, the Gauchos had more than doubled Cal Poly’s shot production at 23-11. However, the Mustangs had been on target all night, putting 8-12 shots on frame compared to just 9-23 for UCSB.

The scoring began in just the seventh minute, as UCSB junior left back Ismaila Jome scored for the second straight game coming off an ankle sprain. Sophomore midfielder Kevin Feucht, who has been playing well lately, found Jome at the top of the box. The left-footed winger showed why he’s been considered one of the most dangerous players in the conference over the past three seasons, curling a shot into the top right corner to put the Gauchos up 1-0.

The assist also gave Feucht a point for the third consecutive outing after he scored a goal in each of UCSB’s previous two games.

It took less than four minutes for the Mustangs to respond, as junior forward Justin Dhillon worked his way into the UCSB penalty area before passing to junior defender Ruben Duran, who put in the early equalizer.

A frenetic first half continued as Cal Poly’s Kip Colvey fired a shot in off freshman goalkeeper Justin Vom Steeg in the 30th minute to give his team its first lead of the game.

The scoring wasn’t done yet, as right before the 39th minute, a corner by UCSB freshman forward Geoffrey Acheampong created a scramble in the box. Junior midfielder Seo-In Kim capitalized on the loose ball to score his first goal of the season, tying it at 2-2.

Acheampong’s assist gave him seven on the year, two more than any other player in the conference. Having recorded a point in eight of the Gauchos’ last 10 games, Acheampong is a leading candidate for Big West Freshman of the Year.

Saturday’s game also marked the second straight time that UCSB junior forward Nick DePuy did not score. Prior to the game at Sac St., he had notched a goal in five consecutive games, all Gaucho wins. Against Cal Poly, DePuy nearly scored with a shot off the post in the 36th minute, but wasn’t able to put away any of his five shots on the night.

Santa Barbara’s success this season may very well depend on whether or not it sees DePuy back in the scoring column this week. In games that the former midfielder has scored in, UCSB is a near-perfect 15-0-3. With the Gauchos hosting two crucial home games this week against both Davis (Wednesday) and Cal Poly (Saturday), their hopes of clinching the No. 1 seed and home field advantage throughout the Big West Tournament for the third consecutive year could be determined in the next five days.

The game on Saturday drew an astounding crowd of 11,075 people. Since 1980, the Blue-Green Rivalry between the two teams has drawn 12 of the 18 largest crowds in men’s soccer. The two teams could add to that number this upcoming Saturday. When UCSB hosted Cal Poly last year, it drew the second-largest crowd in history.

The Gauchos’ next game will be played this Wednesday at home against UC Davis as they look to find some separation in the Big West standings.