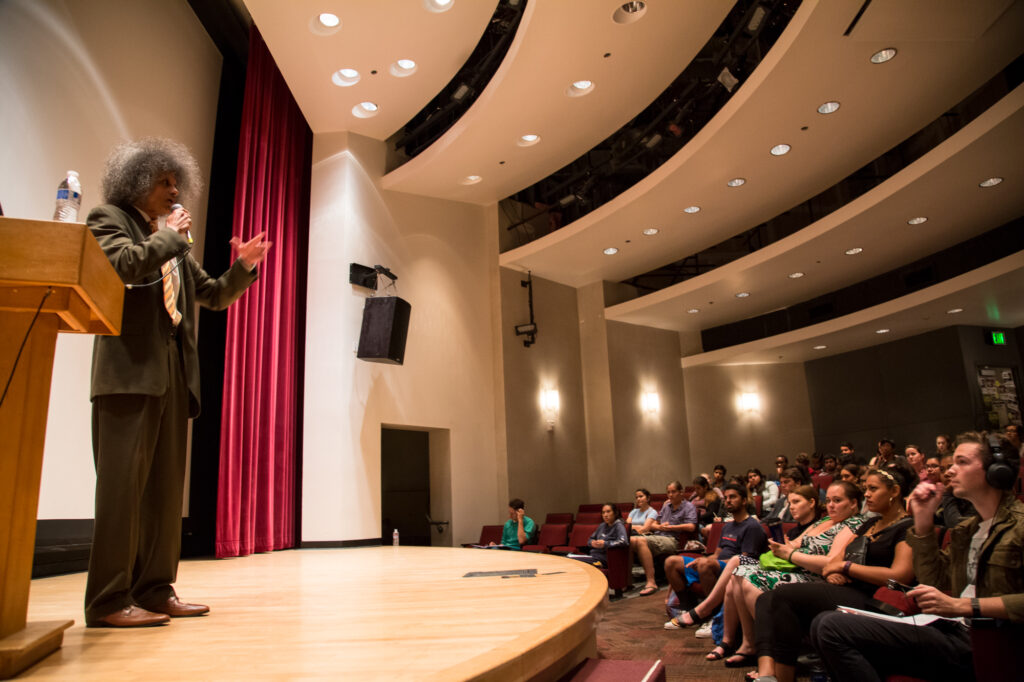 Jody David Armour, the Roy P. Crocker Professor at USC Gould School of Law, discussed the importance of art in relation to the Black Lives Matter movement in a lecture titled “Race, Rap, and Redemption: The Role of Art in Promoting Racial Justice” at the MultiCultural Center (MCC) Thursday evening.

During the lecture, Armour explored how art forms such as gangster rap, shed light on important issues including racial profiling, police brutality and mass incarceration. Armour has been a member of USC’s faculty since 1995 and studies several topics regarding relationships between racial justice, criminal justice and law enforcement. The lecture is part of MCC’S “Race Matters” series, which focuses on the role of racism and race in our society.

Armour began the lecture by outlining racial profiling and the various social injustices it causes. According to Armour, the indignity and embarrassment of being racially profiled can be likened to “murdering an individual’s spirit.” Amour said the case of Sandra Bland, a Black woman who died in police custody in July, illustrates the damages of racial profiling.

“Before Sandra Bland died, she was spirit-murdered,” Armour said. “Whoever took her life, whether it was by her hands or their hands, she had been spirit murdered to lead up to that suicide.”

According to Armour, influential figures in the black community perpetuate negative attitudes toward Black men, such as Bill Cosby lecturing young black men on “pulling up their pants” and “naming their kids right.” Armour also said he employs the word “nigga” to emphasize problematic issues in the Black community.

“The reason why I use that term to talk about social issues is because it gets at a mentality in the Black community that is very ugly and needs to change,” Armour said.

Armour said the first time he gave the “Race, Rap, and Redemption” lecture was in USC’s Bovard auditorium to discuss the Stanley Tookie Williams case. During the event, guests used dance and music to express their opinions of the trial.

“If you want to reach people at a visceral level, I find that art is the most effective way to get people to begin to empathize with people they might otherwise not find anything in common with at all,” Armour said.

According to Armour, rap is a form of art that addresses racial profiling and police brutality in a way most other music does not. Amour said rap groups Public Enemy and NWA showed the perspective of Black persons in police brutality cases.

“This is profound stuff in the profane. You have coarse brutal language to describe a coarse brutal reality,” Armour said. “It was a political oppositional discourse as profane as you can imagine.”

According to a member of an African-American women’s sorority Alpha Kappa Alpha Charlotte A. Gullap-Moore, one reason for the prevalence of racial insensitivity is the lack of Black history education in U.S. schools.

“The more education you have the more currency you have,” Moore said. “The reason why Public Enemy was so relevant was because they educated themselves on Black history, which is not disseminated in the school system.”

“This is a process that should be implemented since kindergarten, not just for Black people but for all people because then it will limit cultural insensitivity,” Moore said.

“We have great programs and I couldn’t be more thrilled with the calendar,” Mohsenian-Rahman said. “This lecture [Race Rap and Redemption] was a way to kick-off the incoming year in a really critical, academic, engaging way.”

I’m glad to see these issues are being discussed in such and effective manner!

Being 50 years old and having spent my entire career in public education, I agree with the need to make every race relevant. We can do that in schools. I look forward to the day when we no longer proclaim that so-and-so is the first person of a particular race or gender to do something. I hope it becomes common for every ethnic group to do well. This can be achieved through education. Thanks for sharing Prof. Armours views.