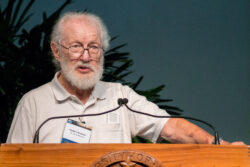 The United Nations has declared 2015 the International Year of Light. To honor that, UC Santa Barbara’s College of Engineering along with the Institute of Energy Efficiency (IEE) hosted a light symposium at Corwin Pavilion consisting of talks by researchers, professors and directors of institutions — including three Nobel Laureates from UCSB — about their work in the light-based technological field

Herbert Kroemer, professor of electrical engineering and materials at UCSB won the Nobel Prize in 2000 for physics “for developing semiconductor heterostructures used in high-speed and opto-electronics. Also, in 2000, Alan Heeger, UCSB professor of physics and materials, received the Nobel Prize in Chemistry “for the discovery and development of conductive polymers.” The most recent of Nobel Prize winners, Shuji Nakamura, UCSB professor of Materials, received the honor in 2014 in the physics category “for the invention of efficient blue light-emitting diodes, which has enabled bright and energy-saving white light sources.”

The event started with a welcome address from Chancellor Henry T. Yang.

“[The purpose of the International Year of Light] is to recognize and raise global awareness of on how light-based technologies promote sustainability and provide solutions to global challenges in energy, education, agriculture and health,” Yang said.

This is certainly true with Kroemer’s fundamental breakthrough in heterostructures that has led to other discoveries and the Solid State Lighting and Energy Electronics Center (SSLEEC) [[ok]] at UCSB that works towards the next generation of LED/laser lighting research.

Sustainability, availability and efficiency are the goals and themes for UCSB’s research on light and light based technology. 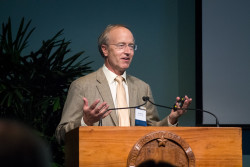 During Nakamura’s discussion on his research and invention of the blue LED, he explained that there could be about 19 redundant nuclear power plants in the United States due to LED use by 2020. To highlight the efficiency, Steve DenBaars, professor of materials and electrical and computer engineering and co-director of SSLEEC, lectured on how the next generation of lighting, laser lighting, would not experience the efficiency “droop” as noted in LEDs.

Furthermore, laser lighting may revolutionize communication. LiFi, as coined by Professor Harold Haas at a T.E.D. talk in 2011, which serves as a light and as a wireless network source, could in the near future replace WiFi in some applications.

In addition to UCSB’s distinguished faculty, there were also other notable speakers. Professor Amnon Yariv, of the California Institute of Technology (Caltech) gave a talk about “pure light” and how there is always a noise associated with light called “God’s noise.” Eva Silverstein, a professor of physics at Stanford University, discussed early universe physics.

In another session, Waguih Ishak, the division vice president and director of Cornering West Technology Center spoke about how lightwave technologies are key to good health, good communications, and good entertainment. To conclude Ishak’s talk, he presented a video that demonstrated the possibility and future of light based technology. It may be possible one day for two surgeons in different countries to see the same patient at the same time using this type of technology.

The conference ended with the keynote speaker, Steven Chu, a William Kenan professor of physics and a professor of molecular and cellular physiology at Stanford University. His discussion was based on the role of light on modern times but also its impact since the beginnings of life.

“Light and, more generally, electromagnetic radiation, has dramatically changed our knowledge of the physical world. It is also the source of oxygen we breathe, the food we eat and the energy that has powered the world since the beginning of the Industrial Revolution. Light will continue to expand our scientific horizons and redefine our daily lives,” Chu said.

“There really isn’t an area that is not touched by UC Santa Barbara in terms of the excellence, the entrepreneurship, the commitment and the leadership,” Alan Willner, president-peElect of the Optical Society of America (OSA) and a professor at the University of Southern California, said.