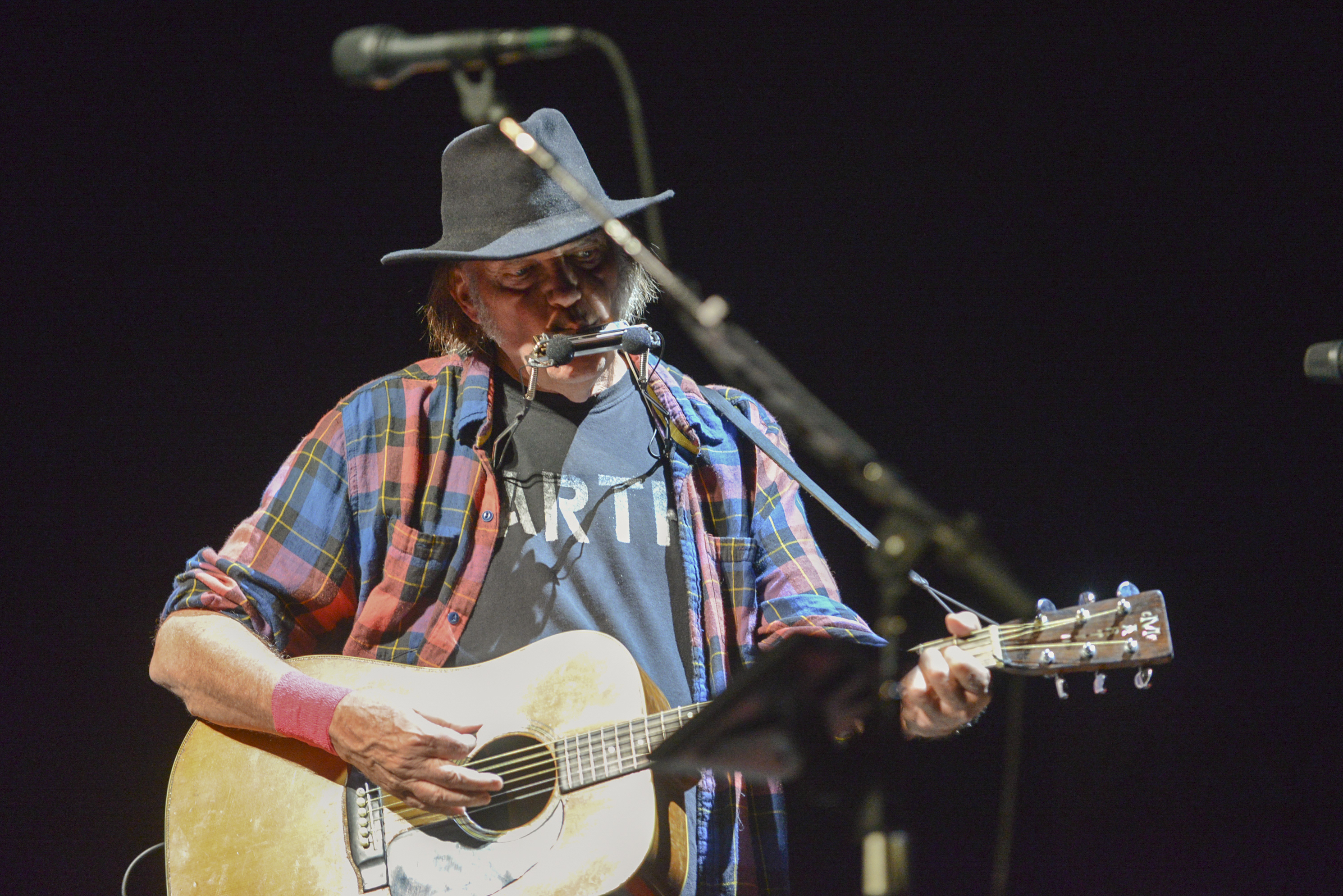 Seeing Neil Young and Promise of the Real at the Bowl was like stepping 50 years back in time to the old days of hardcore musical activism. The crowd was older than that of most Santa Barbara Bowl shows, although it was uplifting to see a spattering of young, crunchy, activist-types as well. There were many ex-flower child parents accompanied by eye-rolling teenagers.

Resting in the sylvan scene was a gathering of activism booths termed “Neil’s Village,” with organizations in line with Young’s long-standing reputation for standing up for the American farmer. Representatives were present from farm justice groups such as Beneficial Insects, Permaculture Magazine, the Hollywood Food Guild/Center for Food Safety and a group fighting to overturn Citizens United and end corporate personhood called Move to Amend.

Diana Reeves, Executive Director of GMO Free USA, who is on tour with Young, said, “He does have a Heart of Gold. I’ve cried before every concert.” Maybe the heroic troubadour was as kind in person as his music might lead listeners to believe. GMO Free USA is the leading GMO activist organization in the nation, advocating a higher standard of transparency and ethics in the food industry.

A small sign served as the only disruption in the idyllic grove, and it spelled out every concertgoer’s worst nightmare: “Show delayed until 7:30.” This was an hour after the show was scheduled.

Finally, after what seemed like an eternity, the stage darkened and simply dressed farmer women walked onto the stage, scattering seeds from small wicker baskets. Suddenly, in response to the eagerly chanting crowd, the spotlight illuminated Young himself sitting at a beat-down wooden piano on the corner of the stage. For a multiplatinum artist, he really did look unassuming, not even taking center stage in his show and appearing dressed in a wide-brimmed black hat, well-worn flannel, jeans and hiking shoes.

He began the show solo with “After the Gold Rush,” and his voice sounded just as tender and heartfelt as it did upon the album’s release. When Young blew his first soul-wrenching note, the harmonica cut right through the sweaty concert air and the crowd responded with an enthusiastic scream.

After the first four solo songs, the stage darkened for an unexpected bit of theatrics: Toxic green LEDs lit up the base of the stage in stark contrast to Young’s naturalist aesthetic, and gas-masked and hazmat-suited villains trudged onto the stage spraying smoke out of pesticide fumers. While some definitely found the effects over-the-top, I thought they were well-executed and harkened back to the stage theatrics of classic rock ’n’ roll. These dark heralds preceded the entrance of Promise of the Real, Young’s backing band for this tour and recording mates for The Monsanto Years.

Although they obviously had big shoes to fill (through an unavoidable Crazy Horse comparison), PotR delivered their performance with the fervor and zeal of any of the heavy-hitting folk-rock bands back in the days of old. The shining star of the group was Willie Nelson’s son Lukas, who posed a striking presence strumming a weather-beaten Les Paul. Nelson took over lead vocals on a cover of Kurt Weill’s “September Song,” and his crooning tones sounded like his father was being channeled through him on the duet with Young. Noticeably different was his brother Micah Nelson. Micah clearly looked out of place as his constant power jumps, camouflage snapback and skin-tight black muscle tee made the impression that he had gotten lost on the way to Warped Tour.

The show’s first half consisted of several of Young’s classic hits including “Helpless,” “Out on the Weekend,” “Only Love Can Break Your Heart,” and “Alabama.” On “Words (Between the Lines of Age),” the crowd lost their heads at Young and Nelson’s screeching guitar riffs. The group delved into material off of Young’s most recent release, this summer’s Monsanto Years. The four-song block of unfamiliar material seemed to drag on quite a bit. Many of the lyrics from Young’s newest album come off a little heavy-handed (several songs included the band repeatedly droning “Monsaantoooooooo”), although the crowd seemed very passionate about the issues and replied with their usual repertoire of cheers and fist-pumps.

Young moved back into his older material for the remainder of the show and really harkened back to his psychedelic influences during “Down by the River” and “Time Fades Away,” breaking off into several-minute trance-like jam sessions. I heard one presumably stoned older fan behind me whisper, “It’s like they’re back in their garage, maaaaan.” As the show neared a close, Young stopped the performance for a so-called activist “hootenanny.”

You could tell this is where his passions really lie, as he spoke truly from the heart about a new California Seed Law prohibiting the sharing of seeds more than three miles from where they left the ground, adding a seriously crippling restriction to state farmers. Young began to throw packets of seeds into the audience, calling out for cops to “come up here and arrest me.” While this might not have been as glamorous as protesting the Vietnam War, it was incredibly inspiring to see someone as late in his career as Young fighting for the things he loves.

Finishing off the show with “Love and Only Love,” Young announced that they were approaching the Bowl’s curfew, and had to go. Of course this was only a jest, and the band returned to the stage a couple of minutes later for the inevitable encore.

“I certainly hope we offend somebody,” Young announced. “We’ve only got a couple more minutes before we really have to leave, so we’ll try our hardest to shorten this song as much as we can…”

The band, of course, did nothing of the sort. The encore song was “F***in’ Up,” and the audience went absolutely bananas for it. Both Young and Lukas Nelson took multiple fearsome guitar solos mid-song and sounded like they had descended from Valhalla itself. It was clear the audience was in a total frenzy, as even the begrudging teens at the show were jumping and shouting their lungs out at the folk-rock legend.

Somehow, Young managed to break every single string on his guitar by the end of the encore. It was clear at this point that the group was fully intent on messing with their imposed curfew as much as possible. Trying to stretch the show and stick it to the sedate Santa Barbarans suffering from sleepiness, the band put the guitar track on a feedback loop and proceeded to lay Young’s guitar to rest underneath his sweat-drenched flannel while Young spent a couple of minutes playing with the whammy bar. They then went around the stage watering all of their plants (very urgent business, of course), and left the stage with the feedback still ringing. Their hilarious disregard for regulations and authority left the audience in high spirits.

The very … enthusiastic concertgoer by the name of Penny Lane said, “Game changer. Mind rubber. Every day I wish that he’ll pull me up on stage and he didn’t, but it was definitely a close one this time.”

“Keep it Neil” was embroidered on the back of her fringe jacket. It was hard to deny a bolstered connection to Young after this touching performance.