The Daily Nexus
Sports Blogs
Grizzlies Travel Cross-Country to Train at UCSB
October 15, 2015 at 5:10 am by Elliot Thornton 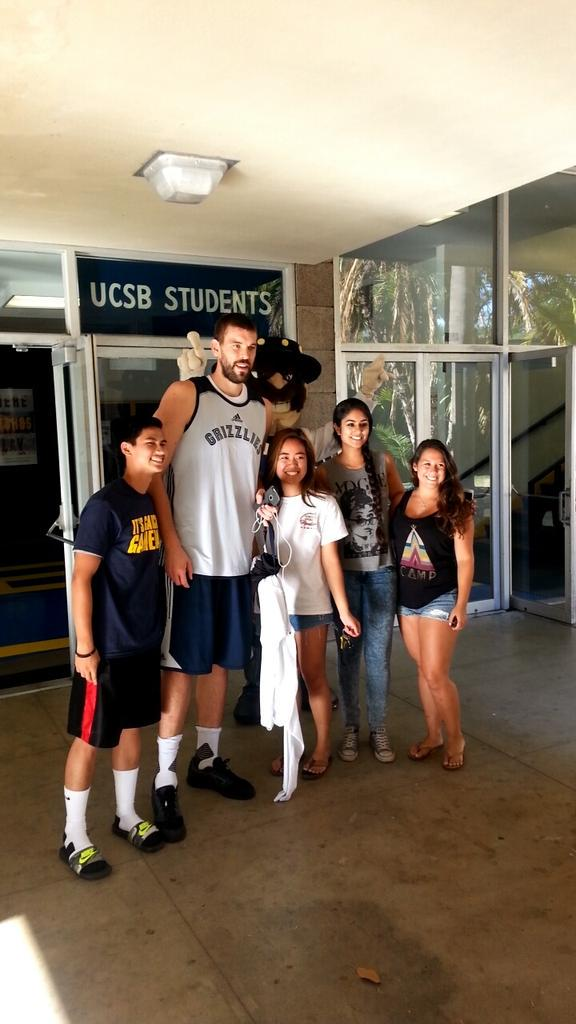 California has a knack for reeling in people from all over. To open the month of October, it welcomed a band of 21 NBA players. The Memphis Grizzlies kicked off the 2015-2016 season holding their six-day training camp at Robertson Gymnasium in UC Santa Barbara.

Hosting last year’s camp at RIMAC Arena in UC San Diego, it was only fitting that Head Coach Dave Joerger and his team headed west for another Cali training session, this time to the warm parts of Isla Vista.

When asked why California is such an ideal place to train for the Grizzlies, 10-year veteran Beno Udrih said, “After a hard day of practice, it’s always nice to get outside and enjoy this quality weather. We had a really great experience down in San Diego [last year], and now we have another opportunity here in Santa Barbara.”

The Grizzlies’ preseason at UCSD appeared to pay off in league play as they finished the year racking up 55 wins and 27 losses, the second best record in franchise history. Memphis took second place in its Southwest Division as a result, solidifying a fifth-place seed in the Western Conference Playoffs.

After a promising first round win over Portland in April, crushing the Trailblazers four games to one, Memphis fell short of its NBA Finals hopes, losing a 4-2 second round series to the reigning NBA champs, the Golden State Warriors.

Last year wasn’t the first time the Grizzlies had a Finals appearance stolen from them. During its 2012-13 campaign, Memphis suffered a four-game sweep in the Conference Finals to the San Antonio Spurs. The Grizzlies arguably had their best season that year, putting up a franchise-record of 56-26 and having the Defensive Player of the Year in center Marc Gasol.

Coach Joerger and his crew have had their chances but have not been able to capitalize. While a crucial facial fracture to team captain Mike Conley might have hindered the team’s quest for a ring last year, the Grizzlies leave this matter behind and continue to focus on one common goal: playing in June.
Udrih believes the key in getting over this tough playoff hump starts from within.

“We need to keep believing we can do it,” Udrih said. “We hit a losing streak last year in March then [played] good basketball during the playoffs but got crossed with the best team in Golden State … if we trust in [ourselves] and work hard, anything is possible in this league.”

After a couple pit stops around the NBA the two-time champion has made his home here in Memphis. Udrih had one of his best seasons last year adding point guard leadership behind Conley and offensive production for a young Grizzly second-string rotation. The vet from Slovenia finished second in bench, scoring averaging 7.7 points per game right behind mid-season acquisition and former Boston Celtic Jeff Green.

While it has been an uphill battle for Udrih spending the majority of his years with Sacramento, he has no doubt that his time in Memphis will be a promising one.

“I spent four years in Sacramento and they weren’t very good team-wise,” Udrih said. “I bounced around a little bit but now I’m here in Memphis and I feel appreciated for what my game is on and off the court. It’s great and hopefully I can finish my career here.”

Along with Udrih and Green holding the front for the second team, the Grizzlies have added a nice mixture of youth and experience to their roster. Memphis signed rim protectors Brandan Wright and Ryan Hollins as well as combo-guard Matt Barnes this offseason. The three veterans will have a tremendous impact off the bench especially later on in the postseason.

On top of this Memphis has seen good production from young guys like JaMychal Green, Russ Smith and Jordan Adams. All three were elite scorers for their respective college teams (Alabama, Lousville and UCLA) and can have breakout performances at any moment.

With one of the best starting lineups in the league, a healthy Mike Conley back and a bolstered bench full of vets and youths, it seems like the Grizzlies are in good shape for a playoff run this year. The question is: How far will they go?

A version of this article appeared on page 12 of October 15, 2015’s print edition of the Daily Nexus.