The Daily Nexus
Sports
Gauchos Sacked at Sac St., Face Cal Poly Next
October 15, 2015 at 5:09 am by Michael Jorgenson

Five was the magic number for the UCSB men’s soccer team coming into yesterday’s road matchup at Sacramento St., as it looked to win its fifth straight game to open conference play. Unfortunately for the Gauchos, that number belonged to the Hornets on Wednesday, as they handed UCSB a 5-2 loss, its worst of the season. 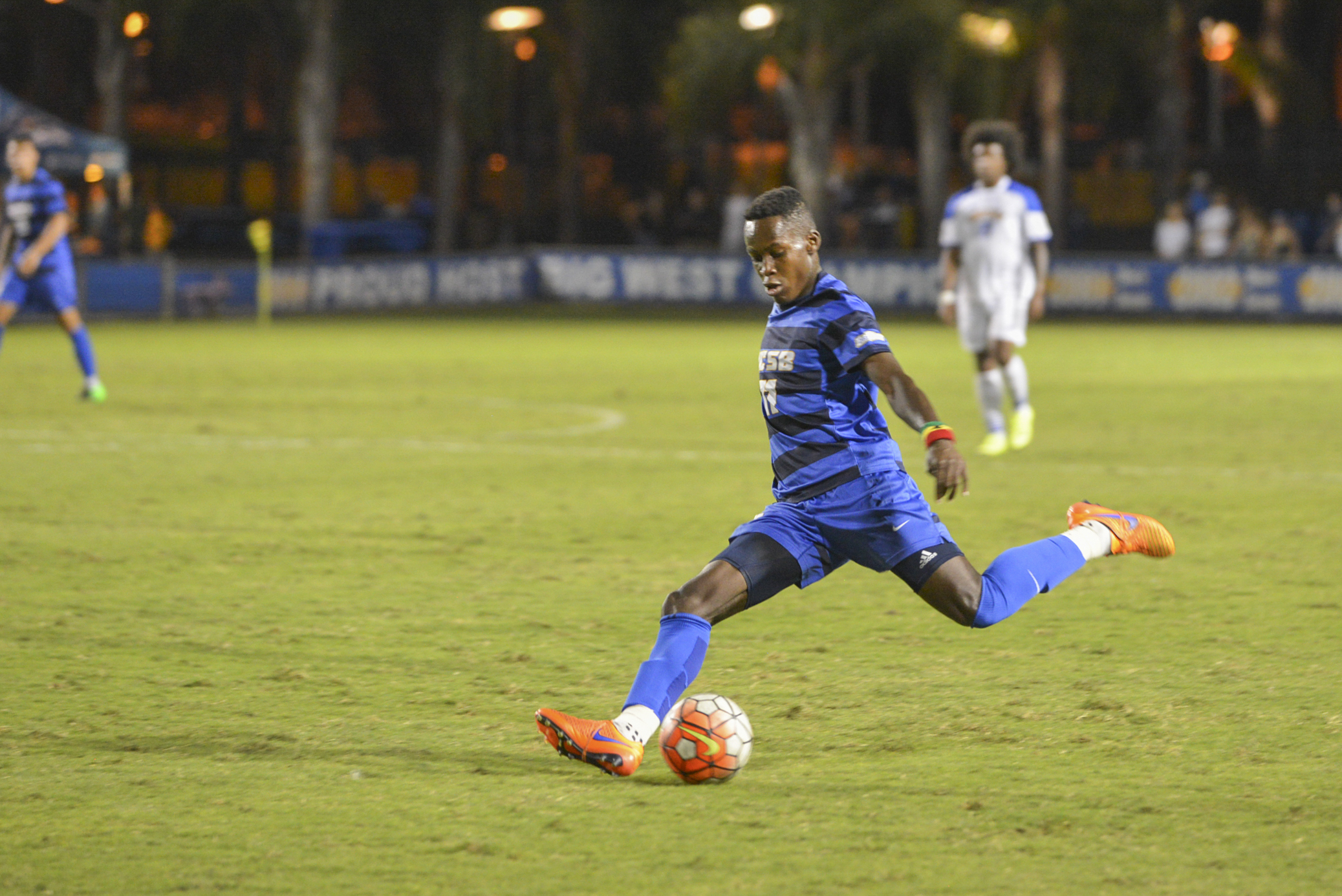 The defeat was UCSB’s first regular season Big West loss in nine outings dating back to last year, bringing its record to 9-4-1 overall and 4-1 in conference. The big win for Sac St. brings it to an overall record of 5-7-1 and 2-3 in the Big West, bringing it level with Cal Poly in the win column as it looks to make the Big West Tournament for the second straight year.

The Gauchos will be heading back on the road this weekend to face Blue-Green rival Cal Poly as they look to extend their slim two point lead over UC Davis atop the Big West North. The Mustangs fell 3-2 in overtime to UC Davis yesterday to move to 7-3-3 overall and 2-1-2 Big West.

UCSB may have come into its third road conference game a little overconfident, as Sac St.’s unthreatening overall record was not necessarily an accurate portrayal of how dangerous the team could be. The Hornets had played eight of their first 10 games on the road, getting them off to a 3-6-1 start. However, they entered their home matchup with the Gauchos with a solid 2-1-1 record at Hornet Field.

After a strong first half effort by the Hornets sent them into the break with a 2-0 lead over UCSB, the Gauchos came out strong in the second stanza. Sophomore midfielder Kevin Feucht scored for the second consecutive game in the 47th minute, putting in a rebound to cut the lead in half.

In the 64th minute, Sac St.’s Ivan Ramirez extended the Hornets’ lead off a Gaucho turnover. The junior midfielder led a breakaway before dribbling around UCSB freshman goalkeeper Justin Vom Steeg to finish into the open net, making it 3-1.

Just 20 minutes later, the Hornets ended any hope of a late comeback with another goal from junior defender Preston Davis.

It took only 34 seconds for junior left back Ismaila Jome to answer back for UCSB. Playing in his first game since suffering an ankle injury nearly a month ago, Jome capitalized on a Sac St. turnover before firing a shot over the keeper, giving him his first goal of the season.

Already on their way to defeat, the Gauchos conceded yet another goal in the 88th, with Sac St.’s junior defender Argenis Ramos scoring another rebound goal for his team.

Redshirt freshman Brad Bumgarner has led the Hornets all season on the offensive side and he didn’t disappoint in the first half. After picking up an assist on teammate senior forward Isaac Flores’ goal to open the scoring in the 24th minute, Bumgarner scored one of his own in the 34th, giving him a team-leading five goals on the season.

Despite outshooting the Hornets 19-17 on the night, Vom Steeg was only able to make two saves on the night as his record as a starter fell to 9-3. UCSB had not conceded more than two goals all season prior to yesterday’s game.

Last night also marked the end of forward Nick DePuy’s run of five consecutive games scoring. The junior still leads the Big West in goals by a wide margin with 12 on the year, five more than any other player. UCSB is a near perfect 15-0-3 when DePuy scores.

Picking up an assist on the Gauchos’ first goal against Sac St. gave freshman forward Geoffrey Acheampong six on the year, also the most in the conference.

UCSB will now shift its focus to Saturday’s matchup with Cal Poly, the No. 27 ranked team in the RPI rankings as of October 12.

Cal Poly has scored only 16 goals this season, just one more than the conference’s worst goal scoring teams, but has found success thanks to its stifling defense.

The Mustangs have gotten off to a 2-1-1 start in conference, allowing just 0.95 goals per game, good for second best in the Big West. Senior goalkeeper Wade Hamilton has led the way with a 0.95 goals against average, the second best mark in the conference. As a team, Cal Poly has five shutouts this season, tied with Cal State Fullerton for a number one ranking.

The last time these two teams played, UCSB came away with a huge 2-0 win on the road. This will be the first of two Blue-Green matchups that will take place in the span of seven days, as Cal Poly will come to play at Harder Stadium next Saturday.

A version of this article appeared on page 12 of October 15, 2015’s print edition of the Daily Nexus.