The Daily Nexus
Sports
Five Game Win Streak On the Line at Sac St.
October 13, 2015 at 5:00 am by Michael Jorgenson 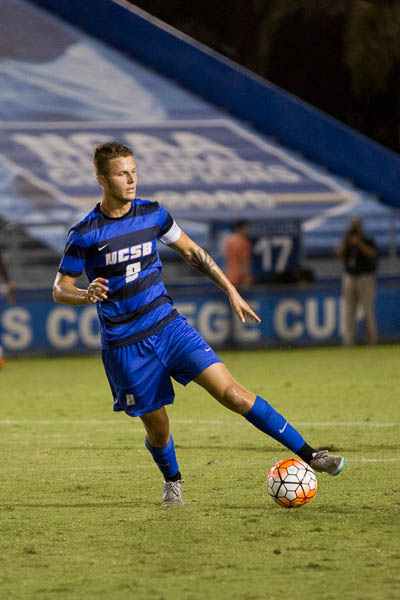 While dribbling down the field, Duncan Backus looks for an open teammate. Dustin Harris/Daily Nexus

Coming off a pair of wins in its first two conference home games of the season, the No. 13 UCSB men’s soccer team will take a mid-week road trip to face Sacramento State tomorrow at 4 p.m.

“We’re coming around to where we’ve kind of found our stride. It just comes down to keeping our heads up, staying focused and playing each game like it could be our last,” freshman forward Geoffrey Acheampong said. “With that mentality, I feel like that’s how we’ve been coming in clutch with games and it’s been great so far. We just hope to keep the fun going.”

“We’re beginning to play with each other’s strengths and making sure we eliminate a lot of our weaknesses,” Acheampong said. “We’re taking it one at a time right now. The Sac. State game is one that we must win.”

As a team that looks primed to head into the postseason with a No. 1 seed for the third-straight season, Santa Barbara’s success over the past year has been directly related to the contributions of forward Nick DePuy.

In games that the junior has scored, UCSB is a near unstoppable 15-0-3. Since moving to forward from the midfield in 2014, DePuy has scored 21 goals in 26 games, the most in the nation during that stretch.

Recently, DePuy’s production has been as consistent as ever. He has a Big West-leading 12 goals and has scored in five consecutive games, all UCSB wins, notching the game-winner in four straight games.

DePuy’s work on the field has earned him three straight Big West Offensive Player of the Week awards, making him the first to ever do so. Now totaling five in his career, he has moved into a tie for third all-time in the Big West.

All this consistent success has put DePuy in the national spotlight. With three goals and two game-winners on the road in the conference’s opening weekend, the Irvine native earned his second career National Player of the Week award. With seven game-winners this season, he has two more than anyone else in the country.

While DePuy has done all he can for his team, a couple of first-year Gaucho forwards in freshman Geoffrey Acheampong and sophomore Ahinga Selemani have given UCSB the much-needed support in the attacking third that it lacked last season.

Acheampong’s success has also correlated with the team’s success, as he has scored or assisted in six of the Gauchos’ last eight games. He is currently tied for first in the Big West with five assists, and UCSB has a record of 7-0-2 when the Cate School graduate has recorded a point.

Another left-footed attacker in Selemani is tied with Acheampong with three goals for second-best on the team to go along with two assists. The transfer from Michigan has put the pressure on defenses all season, ranking fourth in the conference with 36 shots.

As a team, UCSB has tallied 27 goals for the year, averaging over two per game and nearly matching its 2014 total of 30. Dating back to last season, Santa Barbara has won seven straight conference games and is undefeated in nine straight.

On the defensive side, freshman goalkeeper Justin Vom Steeg has gotten off to a great start to his NCAA career with a record of 9-2. His goals against average of 0.89 ranks second in the conference, while his .787 save percentage is the third-best mark.

Sac. State doesn’t possess nearly the same kind of firepower as its North Division counterpart, scoring just 15 on the season, one more than last-ranked Cal Poly.

While the Hornets enter tomorrow’s game well under .500, their record isn’t necessarily an accurate representation of how good a team they are. A rough schedule to open the season saw them play eight of their first 10 games on the road. When playing at home, they are a much better team, going 2-1-1 in four outings.

Sac. State’s only conference win came at home in a 3-2 victory over UC Irvine. Sophomore goalkeeper James Del Curto recorded 14 saves in that game, the most of any player in Division I soccer this season. He ranks second in the Big West with an average of 4.5 saves per game, a stat which could be inflated due to a defense that has allowed the second-most goas in the conference at 1.7 per game.

On the offensive side, redshirt freshman forward Brad Bumgarner leads the way with four goals. A balanced attack has seen five other Hornets score two goals.

Twenty-seven-year Head Coach Michael Linenberger earned Big West Coach of the Year honors in 2014 as Sac. State qualified for the Big West Tournament for the first time since joining the conference four years ago.

The game is set to kickoff at 4:00 p.m. tomorrow at Hornet Soccer Field.