The Daily Nexus
News
Long-Planned Ice Rink Opens in Goleta
October 12, 2015 at 5:00 am by Kalina White 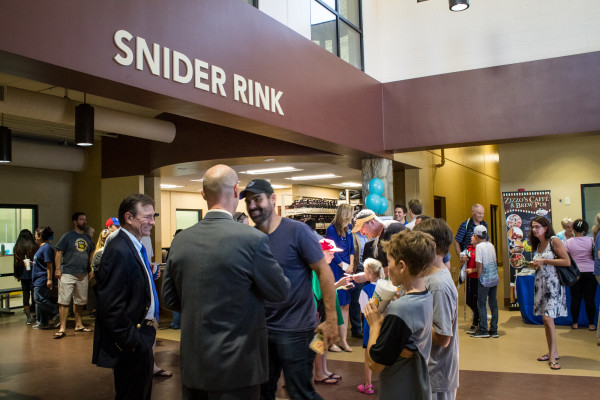 The GSBISA planned and developed the 46,500-square-foot facility for over 10 years, aiming to build an affordable facility for skating and ice sports available to Goleta and Santa Barbara residents. The ice skating rink will operate as a non-profit recreational center registered under the 501(c)(3) title as a tax-exempt organization. The ribbon-cutting ceremony and grand opening of Ice in Paradise are set for November.

“Just seeing the smiles, just seeing everyone happy makes it all worth it,” Mintzer said. “This will be a great place for people to come, hang out, have fun … it will be the ‘coolest’ place in town.”

Skating instructor at Ice in Paradise Frank Anderson said the development process was completed with the help of local organizations and donors.

“It has been a long time and we started working on this quite a while ago, but we are here and we’ve got the support of the community to make it happen,” Anderson said.

Mintzer said Ice in Paradise has several ice skating options for disabled participants, such as sled access for participants using wheelchairs. According to Mintzer, all the locker rooms are American Disability Association equipped.

“We do have the capability for adaptive ice sports for people with disabilities,” Mintzer said. “You can literally go from a wheelchair onto the ice.”
Mintzer also said the rink will offer sled hockey, a popular sport for the Wounded Warriors organization which serves veterans.

“This is the only rink west of the Mississippi that is going to be able to offer [sled hockey],” Mintzer said.

According to Anderson, the ice skating rink will cater to people with various physical disabilities. Anderson also said Ice in Paradise is one of two non-profit ice rinks in California.

“We’ve got instructors here that are familiar with teaching blind kids to skate,” Anderson said. “We can accommodate all types [of disabilities].”
Mintzer said UC Santa Barbara’s ice hockey team will have a new home at Ice in Paradise.

“It was packed upstairs with the [fans] cheering, so this will be home of the Gauchos!” Mintzer said.

Goleta resident Andy Valdez said he loves bringing his children out to ice skate and is grateful for the opportunity to involve them in the ice hockey teams at Ice in Paradise.

“When we try to go ice skating, we always need to drive to Ventura, Oxnard or Santa Maria,” Valdez said. “I can tell it’s going to be successful because in this case my kids are very happy.”

According to Goleta resident Pamela Zaragoza, the last ice rink in the Santa Barbara area, Ice Patch, closed down over 20 years ago. Zaragoza said the new ice rink will be an important addition to Goleta.

“My husband worked at the last ice skating rink we had in Santa Barbara, and he was excited to come today,” Zaragoza said. “I see a lot of little kids out there having a great time, obviously skating for the first time, and this will just open up something we haven’t had in a long time.”