The Daily Nexus
Sports
Another Winner From DePuy Keeps Perfect Conf. Start Alive for No. 13 UCSB
October 12, 2015 at 12:41 pm by Michael Jorgenson 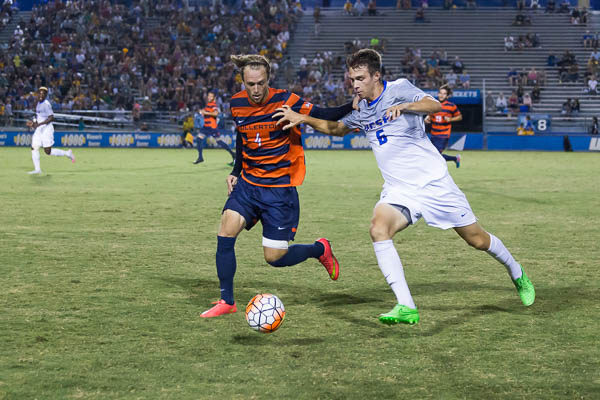 It took two overtimes, but the No. 13 UCSB men’s soccer team continued its perfect start to conference play with a 2-1 win over Cal State Fullerton at home this past Saturday. For the fourth straight game, junior forward Nick DePuy was the hero, scoring his nation-leading seventh game-winner of the season.

In a defensive stalemate of a match, the Titans’ Julian Okai opened the scoring in the 77th minute. A long throw into the box from defender Zach Bryan took a deflection and fell to Okai about 10 yards away from goal. The senior midfielder volleyed it home for his first goal of the season, seemingly sending the Gauchos to their first home conference loss in their last 12 at Harder Stadium.

However, it took less than a minute before DePuy was taken down in the box, earning the Gauchos a penalty kick. Sophomore midfielder Kevin Feucht stepped up to fire a shot into the bottom left corner, tying it at 1-1. Feucht’s first ever Division I goal was also his first since playing for the University of Charleston last year, where he tallied seven as a freshman.

After a scoreless first overtime in which the Gauchos were outshot 3-1, freshman forward Geoffrey Acheampong hooked up with DePuy for UCSB’s decisive goal. Acheampong ended a nice run up the left wing before coming to a stop and sending a ball into the box. As he seems to do at least once every game, DePuy found space coming through the box and finished with a strong header, providing UCSB with yet another thrilling clutch moment.

The goal sent UCSB to its seventh straight conference win dating back to last year and gave DePuy his 12th score in 13 games this season, tied for second in the nation. The Gauchos’ record in games where the junior scores improved to a virtually perfect mark of 15-0-3.

In his 26 games as a forward, DePuy has scored 21 goals, another nation-leading stat during that stretch. Also having scored the game-winning goal against UCR on Thursday, DePuy earned his third consecutive Big West Offensive Player of the Week, becoming the first player to ever accomplish the feat. With five weekly awards in his career, he is tied for third all-time in the conference.

Santa Barbara was able to come away with a win despite recording only four shots on goal through 103 minutes, its lowest mark in a win since tallying just two in a 1-0 season-opening victory over No. 11 Stanford. Freshman goalkeeper Justin Vom Steeg recorded four saves on the night, giving him a 9-2 record as a starter.

Meanwhile, Acheampong picked up a point for the sixth time in the Gauchos’ last eight games. Similar to DePuy, the left-footed freshman’s statistical contributions have been a predictor of the team’s success. When Acheampong has scored or assisted this season, UCSB has gone an undefeated 7-0-1.

UCSB will head back on the road this Wednesday for a game against Sacramento State as it looks to maintain its unbeaten conference record.