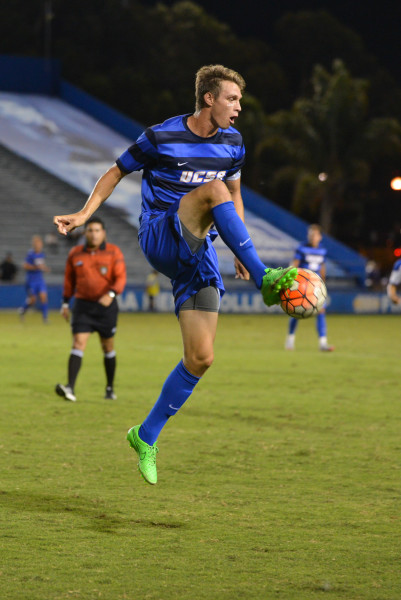 Nick DePuy traps the ball as he flies through the air. Cameryn Brock/Daily Nexus

It wasn’t the prettiest win of the year for the UCSB men’s soccer team, but thanks to a couple of late goals, the Gauchos pulled away for a 2-0 win in their home conference opener over UCR. Santa Barbara’s third consecutive win to open up conference play gives Head Coach Tim Vom Steeg 100 Big West wins in his career, making him the first ever coach to reach that milestone.

“I told the team tonight we had an opportunity to go take a picture in front of the scoreboard and put it up on a wall somewhere,” Vom Steeg said. “That’s not just Tim Vom Steeg’s 100 wins, but it’s UCSB’s 100 wins.”

Now winners in six of their last seven games, the Gauchos improve to 8-3-1 overall and a perfect 3-0 in conference. The Highlanders are now 5-6-1 overall and 1-2 in Big West.

“I thought that Riverside was one of the more dangerous teams that we’ll play all season long,” Vom Steeg said. “Credit to the players, I thought we made a real concerted effort to get a shutout tonight.”

There wasn’t much to be excited about through the first 70 minutes of play, but that suddenly changed as the Gauchos were able to find the breakthrough off a left-footed strike by forward Nick DePuy. The goal was DePuy’s fifth in four games and his sixth game-winner of the season — the most of any player in the nation.

“As the game goes on, you want to have Nick on your team,” Vom Steeg said. “At some point, all season long, he’s found the net.”

The unstoppable junior now has a conference-best 11 goals on the season, already surpassing his total of 10 from last year. Since moving out of the midfield to forward midway through last season, DePuy has 20 goals in the Gauchos’ last 25 games, making him the country’s top goal scorer during that stretch.

“I just make sure every chance I get I put on target,” DePuy said. “I’m learning each game and trying to get better each day. It takes a lot of practice and repetition, but I’ve been working hard and hopefully I can keep scoring.”

The last time these two teams played at Riverside in 2014, UCSB was just barely able to hold on to an ugly 1-1 tie despite playing with nine men down the stretch. Playing under the bright lights of Harder Stadium this time around, it looked like things would be different as UCSB came out firing, recording the first seven shots of the game.

Good scoring chances were scarce, but the Gauchos found their first about 20 minutes in. After some well-worked passing, the ball came loose deep in the box where sophomore forward Ahinga Selemani and DePuy both had chances to open the scoring.

Selemani couldn’t make contact with his twisting effort, but the ball fell to DePuy’s feet right at the edge of the six-yard box. After a quick turn to aim toward the goal, DePuy was unable to get hold of the ball and sailed the shot high.

Riverside wasn’t able to record a shot until the 21st minute, but the momentum seemed to switch from there as the Highlanders forced UCSB freshman goalkeeper Justin Vom Steeg to make three saves over a ten-minute stretch.

DePuy had another good scoring chance to open the second half after a nice 1-2 combination with freshman forward Geoffrey Acheampong, but UCR’s senior goalkeeper Ashkan Khosravi kept it scoreless with a diving save.

The Gauchos were finally able to open the scoring in the 70th minute. Quickly capitalizing on a turnover in play on his offensive half, DePuy found himself with enough space to get off a shot with his weaker left foot, slotting it past the keeper and inside the right post.

“I was just thinking, ‘Take the guy on,'” DePuy said. “We had a chance in the first half and I kind of rushed it and hit it wide. I really wanted to just get my touch out in front of me, hit it low and hard, and that’s what I did.”

With the game not yet decided, a moment of brilliance from Acheampong less than eight minutes later put the game away for UCSB. Attacking down the left wing, the Cate School graduate cleanly split a pair of UCR defenders in the box with a nifty, controlled dribble.

A third defender rushed forward from the middle of the box, but the crafty freshman slipped by to set himself up on his favored left foot. Despite a difficult angle, Acheampong put his rocket left foot to work, blasting a shot past the keeper and inside the far post, clinching the 2-0 win.

“Geoffrey was a handful on the outside for them,” Vom Steeg said. “In that situation, a double team, Geoffrey’s still going to look to play inbetween two and break through. He broke in with the idea of getting the shot off, hitting it hard and keeping it down, and it got us the second goal.”

Acheampong is now tied with Selemani for second on the team with three goals to go along with his team-best four assists.

“Effectively, that second goal was the game,” Vom Steeg said. “[Riverside is] a team that relies on one mistake and one shot. The minute that scores goes 2-0, now it’s going to take two shots. At that point, you can see their team just dropped off.”

UCSB outshot Riverside 16-9 on the night, including seven shots from DePuy. The Gauchos earned their second shutout in their last eight games.

With the win, Vom Steeg became the first coach in Big West history to reach the 100-win milestone. He now has a career record of 226-95-38 through 17 years as UCSB’s head coach, including a 100-28-17 record in conference games.

Up next for the Gauchos is a home matchup with Cal State Fullerton on Saturday as they look to continue their hot start in conference play. The Titans are the only other Big West team that has gone undefeated in conference play thus far, going 2-0-1.

“I don’t care particularly much for Fullerton. Last year we went down there and absolutely got manhandled in that game,” Vom Steeg said. “We’ll absolutely be ready to play on Saturday. We’re going to compete we’re going to hit, score some goals, and we’re going to defend. Shutout number two, that will be the mission for the team.”

The game with Fullerton will kickoff at 7 p.m. on Saturday at Harder Stadium.