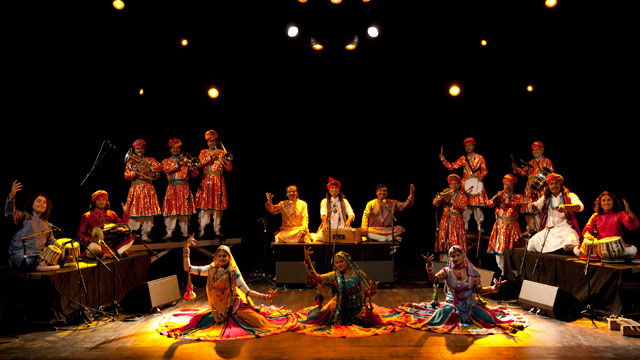 The startling yet welcome sound of children’s laughter mixed with the chuckles of the adult audience members in Campbell Hall at “Spirit of India,” performed by the Bollywood Masala Orchestra and Dancers of India. Spirits had been high from the get-go, as many had the chance to learn an energetic Bollywood dance before taking their seats. The pre-show dance class was presented by a collaboration between Dhadkan, a UCSB organization which hosts the annual Nachle Deewane, a dance competition featuring South Asian culture, and UCSB Mastaani: Hindi Film Dance (HFD). HFD is, in their own words, “the only dance team on campus dedicated to bringing the world of Bollywood to the Santa Barbara community.” Though the children most noticeably came equipped with the energy to dance their best on a Monday night, the dance floor was filled with an array of ages spanning what looked to be three generations.

Neha Nayak and Sruthi Kumar had a better grip on the choreography than most of the dancers — as they well should, since they both dance with HFD. The two explained that within the category of Bollywood, there exist many different styles of the dance form.

“There are different types of dances: There’s bhangra, we try to incorporate hip hop and then there’s the more typical Bollywood,” Kumar, second-year economics and accounting major, elaborated.

Nayak, a third-year in biopsychology, chimed in with some clarification on the choreographic process.

“We usually try to follow the story in the song — each song has words and lyrics, so we try to make steps according to that,” she said, proceeding to demonstrate dhol, the gestural symbol for drums. “When we do this, we are trying to portray drums.”

The Bollywood Masala Orchestra is organized and artistically directed by Rahis Bharti, who has done his absolute best to diversify the “Spirit of India” program as much as possible. Combining traditional percussion with brass instruments for the first time, the musicians of the orchestra give their music a fanfare-esque grandeur, distinctly jazzier than the usual Bollywood tunes. Apart from musicians, three dancers and one acrobat joined in the performance. The daredevil acrobat was the lone male dancer, balancing water in a clay pot stacked upon four glasses on his head. Impressive enough already; but then, he proceeded to dance upon a board of swords and then a board of nails.

The three dancers revealed their most impressive moves in finale of the show: the Kalbeliya Dance, or Snake-Charming Dance. Sinuous and flexible, the dancers’ arms made hypnotizing patterns through air as their skirts carved whirlwinds at their hips. Glittery black fabric accented with bright pinks, greens, oranges and blues were, in themselves, a stunning sight to see; draped upon the bewitching dancers, it was impossible to look away.

Though the three Bollywood dancers only joined the musicians for just a few of the night’s 10 pieces, the stage remained alive with movement for the full two-hour show, and a significant portion of the show asked for audience involvement as well. From clapping to call-and-response vocal percussion, every person was invited to be a part of the music-making.

The show was structured as a progression of music inspired by various Indian cities, beginning in Rajasthan, ending in Mumbai. Playful and competitive, the clappers and drummers alternatively beat their instruments in unison and in battle, complementing and outdoing each other in turn. The crescendo in energy of the entire first half was unbelievable: Energy and passion started at rap battle level and only climbed higher from there.

The one solemn piece of the night was dedicated to Mahatma Gandhi; Earthy and haunting, the singer’s voice held even his fellow performers under quiet enchantment. The absolute silence of the audience held steady vigil in Gandhi’s memory for several breathless minutes. Participating in not just the typical showy dance and song of Bollywood, but joining the performers in time of mourning, made complete the cultural experience “Spirit of India” brought to Santa Barbara.

For more information on “Spirit of India” and the Bollywood Masala Orchestra, visit bollywoodmasalaorchestra.com/index_en.html.