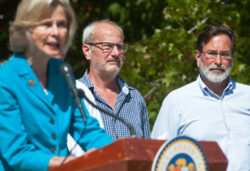 Bob Weiss, father of May 23 shooting victim Veronika Weiss, spoke out for stricter gun control Wednesday in light of the recent school shooting in Roseburg, Oregon.

A 26-year-old male perpetrated a mass shooting at Oregon’s Umpqua Community College last Thursday, wounding several and killing nine students before taking his own life. The FBI and the Douglas County Sherriff’s office are conducting an ongoing investigation into the motives and events of the shooting. President Barack Obama, addressing last week’s tragedy, said mass shootings have become “routine” and U.S. citizens are “numb” to such events.

Weiss said mass shooters “inspire” each other to commit mass murder. According to Weiss, the shooter posted on the website 4chan referencing past shooters, including the Santa Barbara City College student who killed six victims and injured 13 in a drive-by murder spree through I.V. in the events of May 23 last year.

“It’s very commonplace with mass shooters to follow each other and keep score and try to top each other,” Weiss said. “That’s one of the reasons why there’s a movement called ‘No Notoriety’ which urges the media not to publish the names of these mass shooters because it glorifies them in the eyes of the wannabe mass shooters.”

Assemblymember Das Williams said the Umpqua shooting is evident of a larger “epidemic” of gun violence in the U.S.

“The epidemic of gun violence in our country is insidious,” Williams said in an email. “It has become easier and easier for deeply troubled individuals to express their hatred and disdain for their fellow human beings through gun violence.”

Williams said one way to increase gun control is for residents to put pressure on legislators.

“By holding lawmakers accountable and fighting for stricter gun regulations, we can begin to address the myriad of underlying causes of violence in our schools and in our society without, very literally, staring down the barrel of a gun,” Williams said in an email.

UC Santa Barbara Chancellor Henry T. Yang said there are no adequate words to express the “horror” and “sadness” felt by the UCSB and I.V. community for Umpqua Community College.

“Such a devastating loss brings back painful memories for all of us,” Yang said in an email. “We extend our sincerest heartfelt sympathies to the campus and to all the victims’ families, and we wish everyone strength, courage and the will to unite during this most difficult time.”

Yang also said he hopes the community of Roseburg, Oregon will heal from its loss.

“[The shooting] also reminds us that tragedy will not tear us apart, but bring us closer together,” Yang said in an email. “This is our hope for the Roseburg community — hope for peace and healing, hope for a brighter future and a safer tomorrow.”

Weiss said U.S. citizens need to vote for new legislators so increased gun control can be passed into law.

“What happens after these mass shootings is everybody is upset about them for a few days or a couple weeks before it just goes back to business as usual,” Weiss said. “There’s going to have to be a change in our elected officials if there’s ever going to be a change in the laws.”

Weiss also said he agrees with Obama that Americans need to become “single-issue voters” who elect officials based on the criteria that they promote gun safety and gun violence prevention.

“I thought Obama was very forceful and really got to the point of what we need to do in terms of who we vote into Congress,” Weiss said. “We have to start voting for candidates who take a strong stance on gun violence prevention or else it’s never going to change.”

“It is up to our society to say enough is enough and to stop electing politicians who are unwilling to act in the face of such an epidemic,” Williams said in an email. “Our lawmakers have been complicit in allowing this deadly trend to continue, and as a society we have been forced to accept the norm of gun violence whether it is in elementary schools or college campuses, in our own homes or on the other side of the nation.”

“To [students in London] it seems insane that we haven’t done anything about it, and I completely agree,” Potter said in an email. “Being removed from America itself, I really get to see just how absurd it is that we haven’t changed the gun laws by now.”

Potter said she agrees with Obama that mass shootings have become “too routine,” but is unsure of what to do for stricter gun regulations to be put into law.
“You would think tragedy would be enough,” Potter said in an email. “But it seems Obama is right and somehow we’ve become numb to this happening in our country.”

A version of this story appeared on page 1 of the Thursday, October 8, 2015 print edition of the Daily Nexus.

Hi Josh, Thank you for writing that excellent article. While reading it, I couldn’t help but think that what Mister Weiss said resonates with what I’ve been thinking a lot about lately… that maybe the reason why gun-firing mass murderers “keep score” and are “inspired” to try to “top each other” may be the unintended result of their over-indulgence in playing “first-person-shooter” video games obsessively. I noticed that when I used to play video games all the time, I would find that I would dream of playing the games all night long, so that pretty soon, the line between the… Read more »

b
Reply to  Erik Dufresne

Good luck getting anyone on Earth to play that.

That’s everyone, sans artists. What is your role in this? “Idea person” isn’t a job.

It’s been obvious to many people that giving mass killers notoriety just spurs on other potential killers. The higher the body count, the more press they receive and the greater the airing of their grievances. But the media has continued to play along, posting the pictures the killers wanted posted while investigating their “motives”. The killers are also oftentimes turned into victims themselves rather than being villified. The phenomenon of suicide clusters and copycat suicides has been known to psychologists for decades. Read up on it and you’ll see that publishing accounts of suicides spurs more suicides. Some media (and… Read more »

Here is a link to Copycat Suicides on wikipedia that includes a section on journalistic standards. I suggest the Nexus create a standard for itself and acknowledge the issue rather than beating the gun control drum ad nauseam while making supporters of the 2nd Amendment to be unreasonable cretin to be ridiculed.

Since my posting name is Obvious, I thought I should point out something else that is obvious… these mass killers are on a suicide mission, so it’s no stretch to use data from suicides to correlate it to those who engage in murder-suicides.

Dear Mister B, Thank you for responding to my letter to Josh. Perhaps you could forward it to him? With regard to your specific objections… I am under the distinct impression that most children will play whatever video game that their parents provide, and approve, for them. I think the first video-game I can recall playing was one in which I, and other players, had to place an obstruction in front of an advancing, flexible, segmented cylinder, to cause it to divert its trajectory, and head towards some designated destination, and in doing so, we would earn “points”. That being… Read more »