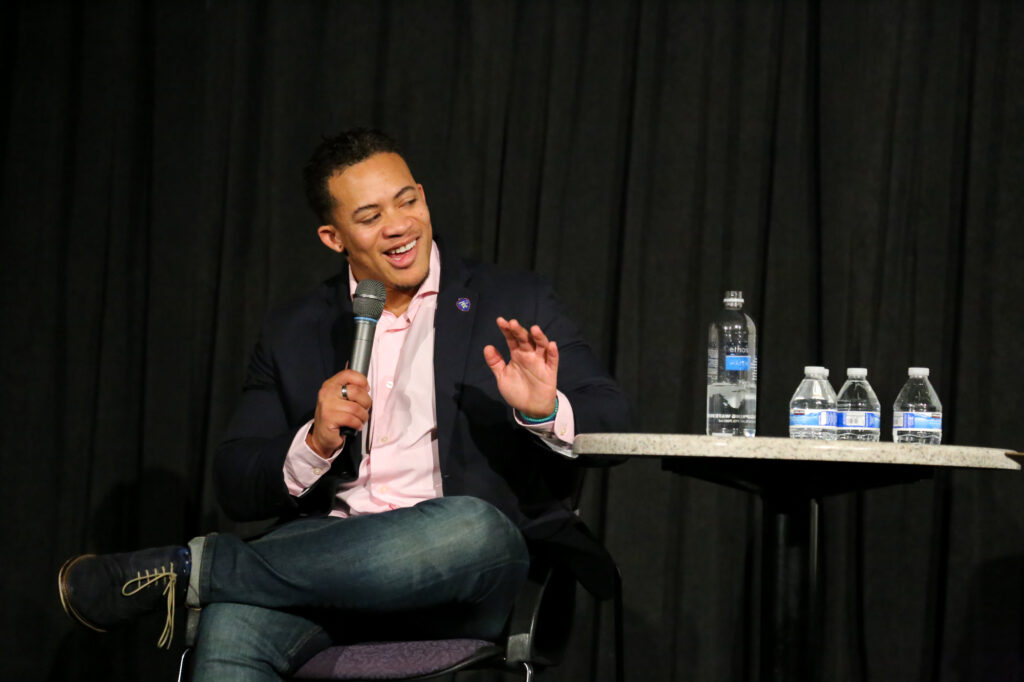 Shane Ortega is the first openly transgender soldier in the military and is very outspoken for trans rights. Jenny Luo/Daily Nexus

Ortega spoke of his own experiences as a marine and sergeant in the military, as well as various transgender issues affecting current servicemen. Ortega served two tours in Iraq, one tour in Afghanistan and is currently a helicopter crew chief stationed in Oahu, Hawaii. Ortega stepped into the national spotlight over the last year, advocating for transgender rights in the military.

Ortega said the takeaway from the event should be to engage in more honest and difficult discussions about rights for marginalized groups.

Ortega said people have the responsibility to be involved in decision-making as conscientious voters.

“We have to start the change with us,” Ortega said. “If you want there to be change … you need to get out there and vote.”

According to Ortega, the Pentagon currently has a 12-person council led by Under Secretary of the Army Brad R. Carson to discuss transgender rights in the military. Ortega said the council’s decisions often correlate with the public’s opinion.

“The decision about trans inclusion in the military is currently with a think tank led by Mr. Carson, the Under Secretary of the Department of the Army and 12 guys at the Pentagon with whom I correspond,” Ortega said.

RCSGD director David Whitman said Ortega addressed important issues on which many students lack knowledge, such as the varying identities on a “gender spectrum.”

“As a trans man and a trans masculine-presenting person, Ortega gave a lot of awareness to different identities within the gender spectrum,” Whitman said. “He talked about his journey as a trans person and what aspects of his life led to his ability to be himself and I think that was empowering.”

Whitman said Ortega’s talk is also applicable to university students, though the talk focused on his experience in the military.

“I would love to see UCSB students come together and prioritize diversity initiatives,” Whitman said. “There are endless communities and intersections in those communities that are very much at risk but are also very much deserving of our respect, love, attention … the more we lean into things we don’t know about … I think the healthier our communities will be.”

Diversity Education Coordinator for RCSGD and third-year sociology major Khadeja Tran said the campus should increase the number of resources for transgender students.

“There are also trans people on campus, a lot of them, who maybe aren’t out yet, who maybe are in between, who need the resources or help from faculty, staff and students to feel more included and for the campus environment to be more inclusive,” Tran said.

“Transgender appearance in the military is something that has been widely debated — whether or not [they] should be there,” Jones said. “Shane Ortega’s success is showing that you can do things even though someone may tell you that you can’t.”

A version of this story appeared on page 7 of the Thursday, October 8, 2015 print edition of the Daily Nexus.