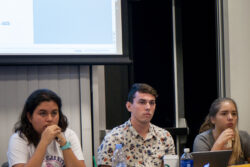 The Associated Students Senate met Wednesday night in the Flying A Room at the UCen to discuss the possibility of having an RHA representative on A.S. Senate, reforming Science, Technology, Aerospace and Research Kapital (S.T.A.R.K.) funding and to vote on the five bills presented at last week’s meeting.

“I would call [single transferable voting] low voter patience. We’ve never asked people to rank 30 candidates in past elections,” Lieberman said. “In order to explain what effect the complex nature of single transferable voting will have on counting the votes, I read Berkeley’s elections code regarding tallying. They give three to seven days — three is the minimum — to seven days and we usually get it [the results] out in three hours.”

Mead said she is working to establish RHA liaisons in A.S Senate and Committee meetings, and productivity could increase if A.S. and RHA worked together.

Mead also said there may be concerns of potentially conflicting interests between students and Housing & Residential Services (HRS) if RHA were to work with A.S Senate and Committees, but the benefits outweigh the potential costs.

“I completely agree that some committees are not suitable for RHA members to sit on,” Mead said. “Luckily, there are many other committees that are, and all of these committees that potentially benefit from having a member the residence halls report to and from [RHA] organization.”

Magaña said he hopes to increase the impact RHA has on A.S and expand the responsibilities of floor representatives, which he believes will improve student body representation.

According to Magaña, floor representatives are willing to increase their responsibilities once they are more involved in A.S.

“I’ve talked to past floor reps about retention,” Magaña said. “Some of their concerns is not necessarily about hour commitment but because they feel like they didn’t have much say even though their position is immensely important.”

Magaña then presented “A Resolution to Create an Ad-Hoc Committee to Fill the Vacant On-Campus Senate Position.”

Larrazolo presented “A Bill to Establish A.S. Student Councils” which outlines a plan to provide a legislative outlet for CCS and College of Engineering (CoE) students to voice their opinions.

“The CCS student council held their first forum and got 40 attendees,” Larrazolo said. “[CCS and CoE] will be able to get a lot more resources that they do not have and also be more connected with A.S.”

Larrazolo then presented “A Bill to Redefine S.T.A.R.K. funds” and “A Bill to Establish the Creative, Artistic, Research, and Diversity Fund,” which outlines two A.S funds to support students’ academic projects and research.