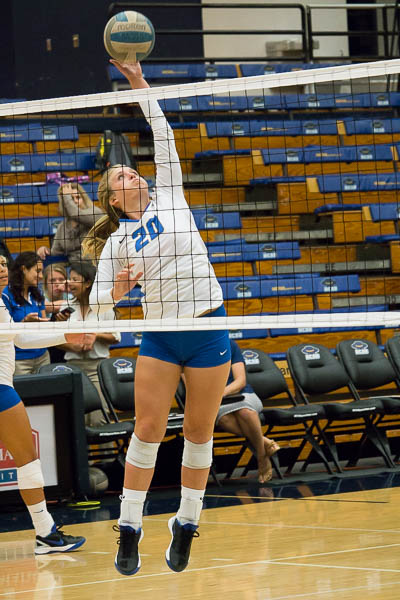 While losing isn’t an embracing result, a team’s attitude after its loss definitely influences its performance on the court. Despite falling to 4-10 and 0-3 in conference, the demeanor of the UCSB women’s volleyball team remains resolute as it continues to search for its first win in nine games.

Through just three games, Santa Barbara has now faced the top three programs in the Big West. It managed to win the opening sets in both of its matches, but became prone to allowing various scoring stretches, which led to UCSB losing three consecutive final sets to end the game in its two home conference openers. Missing from UCSB’s starting lineup this weekend were two of its most prominent players in redshirt senior Hanna Nielson and sophomore outside hitter Chanel Hoffman.

Prior to the beginning of Big West play, Cal State Northridge was once in the same losing quandary as the Gauchos. The Matadors entered conference play with an eight-game losing streak but have recently been the most astounding team, winning its first two conference matchups. CSUN overcame its early set loss and improved to an undefeated three wins in conference, beating UCSB 3-1 in set scores of 25-27, 25-14, 25-20 and 25-20. The Matadors are now 4-12 overall with a 3-1 Big West record after losing to Cal Poly yesterday.

The Matadors seemed destined to win the initial set, facing set-point with a 24-21 lead that led to a UCSB timeout. Yet, the quick break benefited UCSB as it made a substitution that put senior opposite Britton Taylor in the game. The change in rotation was the starting point in the Gauchos’ comeback as Taylor thumped the ball for a kill, trimming the deficit to two at 22-24. Back-to-back kills by freshman Annie Hasselmann and junior Elizabeth Sheffield put the finishing touches on Santa Barbara’s 6-1 run, securing the set victory 27-25.

After achieving a .381 hitting clip in the first set, UCSB’s offense continued to prosper as it opened the second set with a 4-0 run. But Northridge responded with a 6-0 rally of its own to take a 6-4 lead and force a Santa Barbara timeout. The Matadors never lost the lead again and a 9-3 run locked a 25-14 second set win.

During the second set and latter periods of the match, there was some displeasure expressed by UCSB Head Coach Nicole Lantagne Welch toward the officiating. Specifically, her complaints were directed toward the line judge for some calls that seemed to favor the Matadors as they went on to win sets three and four.

When asked if the calls had an influence on the match’s result: “it had an influence on some of the frustrations, but we’ve got to clean up our side of the ball and that’s something uncontrollable that we can’t worry about,” she said. “We played great in set one, we hit over .300 which is excellent. We have to realize that teams are going to adjust and we have to be more adaptable. We have to be quicker to adjust and I think that was something that hurt us tonight.”

Santa Barbara ended Friday’s match with a .164 hitting average while CSUN managed to hit a clip of .200 plus throughout the match’s entirety (.323 match average). Senior outside hitter Cieana Stinson led the Matadors’ assertive attack with a match-high 19 kills. Northridge’s best hitting performance appeared in the fourth set — it clinched victory with a dominant .448 hitting percentage. 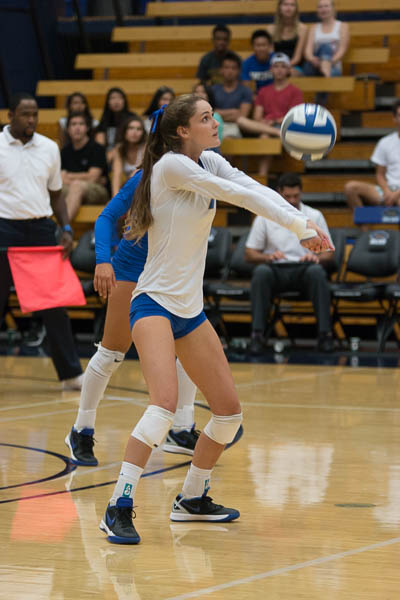 UCSB managed to take advantage of the vulnerable 49ers in the first set of Saturday’s contest. A 9-4 run set the tone for its offense — three-straight service aces by Sheffield helped Santa Barbara finish the opening set with a .452 hitting clip. UCSB maintained its lead, but LBSU trimmed the deficit to four-points at 15-19, which led to a Santa Barbara timeout. It helped prevent a shift in momentum which led to the Gauchos’ protecting their lead and earning the 18-25 set victory.

Hoping to avoid consecutive upset losses, Long Beach State answered back with a 25-19 win in the second set. Starting the third set with a 7-1 run, Santa Barbara inched closer to a 2-1 lead. But the 49ers’ 8-2 run notched the score at 9-9. A series of lead changes and ties would occur, when tied 24-24, kills by freshman outside hitter Megan Kruidhof and freshman libero Mykah Wilson snagged the 26-24 third set victory for Long Beach State.

The results of the third set proved to be the deciding factor in yesterday’s match. “They started taking more chances with their serve and we couldn’t answer — we got stuck in a couple rotations,” Lantagne Welch said. “We need to be able to answer quicker because we were in control of that set.”

In spite of double-digit kill performances by seniors Ali Barbeau and Taylor, as well as 39 assists by freshman setter Annie Hasselmann , the 49ers’ stunning .625 hitting percentage in the match’s final set stamped their victory. LBSU sits at 13-4, 3-1  in conference play.

UCSB finds itself on the road for weekday and weekend matchups. The Gauchos will face UC Davis this Thursday, Oct. 8 at 7:00 p.m. at The Pavilion. On Saturday, Oct. 10, they will visit Cal Poly for a 7:00 p.m. match in Robert A. Mott Athletic Center.