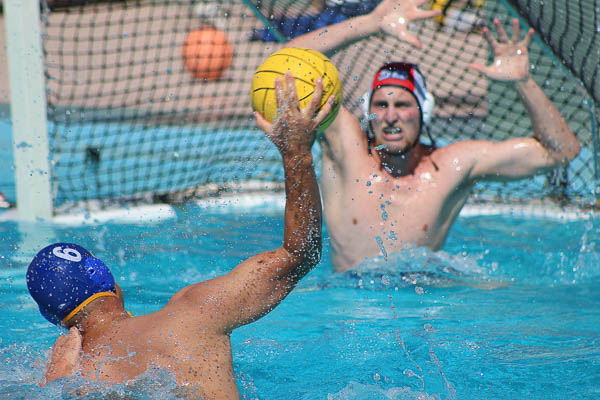 The No. 6 UCSB men’s water polo team starts conference play with a losing record after being defeated by No. 4 California-Berkeley 12-8 on Saturday and No. 5 Pacific 9-6 on Sunday.

The two losses snapped the Gauchos’ five-game winning streak and dropped their overall record to 9-4. Santa Barbara now has a 0-2 record to open MPSF play. The Golden Bears improved to 12-2 overall and a 1-0 start in conference play. The Pacific Tigers are in the midst of an impressive 11-game winning streak and are now 11-1 with a 1-0 MPSF record.

Opening up MPSF play versus Cal was not an unfamiliar situation for UCSB as these two teams met twice earlier this season, the two previous meetings resulting in victories for Cal by identical scores of 12-5. The Gauchos knew they would have to play well throughout the game if they wanted to beat their opponents the third time around.

“We had lost pretty badly to them twice before and felt we didn’t stick to our game plan,” Head Coach Wolf Wigo said. “We knew if we play a better game we could hang with them and get the win at home.”

Santa Barbara did come out strong, scoring on its first possession thanks to a goal by sophomore attacker Shane Hauschild. Later in the first period freshman driver Borislav Jovanovic scored an amazing no-look goal during a power play opportunity, making the score 3-1 in favor of UCSB.

It was an historic moment during the second period as senior goalkeeper Chris Whitelegge became just the 13th goalie in MPSF history to have over 700 career saves. His 700th save came on a power play opportunity that Cal failed to capitalize on.

“It’s cool obviously and an honor,” Whitelegge said. “But it’s still team goals over individual goals for me.”

Following that, the Gauchos found themselves up 5-2 in the second thanks to a penalty goal by Hauschild. However, momentum shifted quickly once Cal junior defender Farrel South converted on a penalty, reducing the Gauchos’ lead to 5-3.

The Golden Bear defender sparked his team’s takeover of UCSB’s lead, scoring Cal’s next four goals to hand his team a 7-5 lead in the third period. Still, the Gauchos clawed their way back and managed to tie it 8-8 by the end of the third period.

Despite a tied score heading into the match’s final period, UCSB’s performance fell victim to a sudden meltdown in the fourth. California scored the final four goals of the game, two by freshman attacker Johnny Hooper, who scored the opening goal of the fourth and the final goal.

“Maybe I could have subbed more,” Wigo said. “We just weren’t that same team that we were in the first three periods and I thought it was fatigue. We dominated the first part of the game but then allowed easy goals, let them get back in and they just played a lot better in the second half.”

The Gauchos underwhelming fourth period proved to be the reason they lost against a great opponent. The same demise would haunt the Gauchos again in their next MPSF conference game against another formidable foe, the No. 5 Pacific Tigers.

Unlike Saturday’s game, UCSB did not come out attacking aggressively to its capabilities. The Gauchos only mustered one goal in the first period and quickly found themselves down 2-1. UCSB seemed to be in a funk as it kept passing around the perimeter and forcing distant shots.

Hauschild tried to break Santa Barbara out of its slump with an amazing deep goal as the shot clock expired. However, Pacific was just too dominant in the first half and ended the second period with a 3-0 run and a 5-2 lead.

UCSB’s confidence entering the third period looked a lot like the team that was dominating California the game before. Led by Hauschild, Santa Barbara outscored Pacific 4-1 in the third period and tied the score, 6-6. The sophomore attacker scored an impressive two goals and assisted on one with a beautiful pass to junior two-meter Samer Alkateb, who put through the equalizer with just seconds left in the third.

“We came out a little slow,” Hauschild said. “Pacific plays a full zone; they let us shoot. We were just too timid in the first half. I wanted to prove that we could shoot and shoot out of that zone.”

However, another scoreless fourth period by UCSB helped Pacific coast to its 9-6 victory. The Tigers scored on their first possession thanks to a beautiful deep goal by sophomore attacker Devon Thumwood and never looked back. Sophomore attacker Blake Hokkanen sealed the victory with a goal late in the game’s ending, just as the shot clock expired.

The loss was another disappointing outcome for UCSB as fatigue seemed to be the repeat culprit in the team’s downfall. The same team that played well in that third frame completely disappeared in crunch time.

“We struggled on offense but played well on defense,” Wigo said. “We have to finish out fourth quarters. After one game you never know but after two back-to-back games, we have to take a better look at that.”

Santa Barbara will head out on the road to Malibu, California for the MPSF Southern California tournament. The tournament is to be held on Saturday, Oct. 10  and Sunday, Oct. 11. Times have yet to be announced.