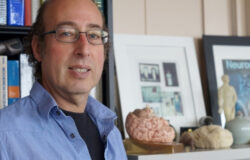 Although a definitive cure for Alzheimer’s is distant at this time, researchers at UCSB have discovered a possible factor important in delaying the onset of the disease. Co-authors Dr. Kenneth Kosik, professor at UCSB and Dr. Matthew Lalli, former postdoctoral student, recently published a paper detailing the effects of the protein, eotaxin, in delaying onset of Alzheimer’s.

The main focus of this study was the age of onset of Alzheimer’s, meaning the age at which the individual first experiences the symptoms of the disease or develops it. Over a five-year period, Lalli sequenced over 100 genomes of a Columbian family affected by early-onset Alzheimer’s. Members of this family usually develop full symptoms of the disease by the age of 49 due to harmful mutations in their genes. However, a few of them developed Alzheimer’s up to a decade later than the rest of their family members. Lalli implemented a statistical genetics approach to evaluate the differences in their genes in hopes of understanding more about the age of onset.

“The Colombian Alzheimer’s disease population in our study is affected with a Mendelian form of Alzheimer’s caused by a dominant mutation in the gene Presenilin-1,” Lalli said.

Presenilin-1 usually contains the instructions for proteins which “cleave” apart plaques that develop in the brain. When this gene is mutated, the proteins produced cannot effectively perform this process. The result is — you guessed it — Alzheimer’s.

Lalli said the study “aimed to identify additional genetic factors contributing to Alzheimer’s disease”. Alzheimer’s is determined largely by the genes of an individual, and the “heritability,” or the genetic diversity of a trait, in Alzheimer’s makes it essential for researchers to study the genes of afflicted patients.

“There are genetic variants that affect the age of developing Alzheimer’s,” Lalli said. “We wanted to find these variants, which we call modifiers because they modify the age of Alzheimer’s disease in our study.”

Lalli explained that there are 3-5 million variants in each individual genome, usually differing in just a single nucleotide.

Kosik’s team discovered a gene variant which prevents the protein eotaxin from accumulating as people age. Eotaxin levels may affect the age of onset of Alzheimer’s in addition to playing a role in ageing, the single highest risk factor of developing Alzheimer’s.

“Eotaxin levels are known to increase with age in mice and humans, and this increase has been shown to cause memory loss in mice,” Lalli said. “In our study, eotaxin levels were correlated with age of developing Alzheimer’s disease.”

Results suggested that participants with the particular gene variant maintained stable eotaxin levels throughout their lives and benefitted from a slightly delayed onset of Alzheimer’s. However, more research must be done to evaluate this correlation, before a substantial claim can be made or a cure can be found.

“If the relationship between eotaxin levels and Alzheimer’s onset is true, it should be straightforward to target eotaxin levels in humans to alter the progression of Alzheimer’s disease,” Lalli said. “Drugs modifying eotaxin are already in clinical trials for other inflammatory diseases, so applying them to Alzheimer’s could happen immediately.”

A version of this story appeared on p. 14 of the Thursday, Oct. 1 print edition of the Daily Nexus.