Adversity is an essential element of sports. It’s an integral opportunity for a team’s morale and mental toughness to be tested at its most vulnerable state. It has been nearly a month since the UCSB women’s volleyball team’s last victory, but the Gauchos remain adamant about their potential to contend in the Big West.

“Conference is long, and we play everyone twice. At this point half of us have wins, half of us have losses,” senior outside hitter Ali Barbeau said. “This early, anything can happen. We’re keeping our heads up and we know that we can come back.”

UCSB returns to Santa Barbara in search of its first conference and home win of the season. At 4-8, the Gauchos hope to shake their seven-game losing streak in weekend bouts against Cal State Northridge tomorrow and No. 24 Cal State Long Beach on Saturday. 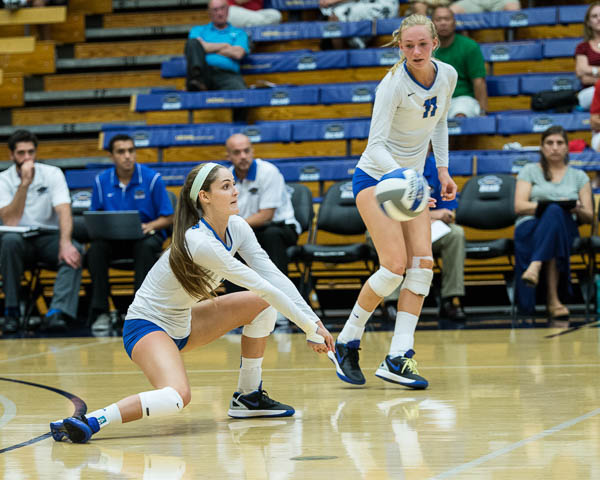 Beginning its conference season against No. 10 Hawaii may have been a little overwhelming, but as the year transpires UCSB remains committed to its development as a team.

The quest for improvement starts with UCSB’s offense and its need for a consistent attack. During non-conference play, the Gauchos averaged a .206 hitting clip. However, in their conference opener, they achieved a dismal .121 hitting percentage. Since losing 3-1 to SMU, the Gauchos have not had two players record double digit kills in the same contest.

Despite having just one win prior to the start of Big West play, Northridge has triumphantly kicked off its conference schedule. The Matadors, now 3-11, are on a two-game winning streak after sweeping UC Irvine and a 3-1 victory over UC Davis.

Bearing the offensive torch for the Matadors is senior outside hitter Cieana Stinson. She has been a key centerpiece to CSUN’s progression as she leads the team in kills (182) and blocks (24). Stinson has recorded double-digit kills in nine of Northridge’s games, and just this past Monday was named Big West Women’s Volleyball Player of the Week. A well-deserved honor, as Stinson is coming off a weekend in which she tallied a total of 39 kills and averaged 5.57 kills per set to compliment a smashing .423 hitting clip.

Molding into Northridge’s next elite star at the outside hitter position is freshman Aeryn Owens. Despite a meager .127 hitting average so far this season, she ranks second in CSUN’s kills total with 111. Since the award’s creation prior to the 2014 season, Owens became the first Matador to receive the Big West Freshman of the Week award after chalking up 29 kills and a .313 hitting percentage in the team’s first two conference matches.

The reigning champions of the Big West Conference, Cal State Long Beach has its eyes set on a repeat performance of its undefeated, 16-0 conference record of last season. Currently 12-3, the 49ers are off to an emphatic start at 2-0 after last weekend’s home conference opener.

Cal State Long Beach’s determined foundation of players certainly helped pave the way for the 49ers’ success. Last season’s Big West Player of the Year, senior Jenelle Hudson became just the second setter in CSULB history to earn the award. She currently leads the Big West in assists with a total of 587 and sits second in assists per set with 10.30.

Sophomore middle blocker Ashley Murray was also recognized for her performance in last year’s remarkable run as she was the recipient of the 2014 Big West Freshman of the Year award. Aiding Murray at the middle blocker position is Ball State transfer, senior Hayley Benson. She recently earned Big West Defensive Player of the Week after tallying seven blocks and two blocks per set in the 49ers conference opener.

Despite preparing for its second and third conference games of the season, the stakes are slowly heightening for UCSB as a win could reinvigorate the Gauchos’ hopes this season.

“Right now our focus is first on CSUN and then we’ll look at Long Beach as well,” Lantagne Welch said. “It comes down to the process. Let’s put together what we did well this weekend and add a little bit more to it. We have the advantage of playing at home and the students are now back, and that could have a lot of stuff go in our favor.”

Tip-off between UCSB versus Cal State Northridge will proceed at 7:00 p.m. tomorrow, Following the Gauchos’ Friday bout is their Saturday match versus No. 24 Cal State Long Beach. Both games will be played in the Thunderdome.