The Daily Nexus
Volleyball
Gauchos’ Inconsistencies Too Costly in Conference Opener
September 28, 2015 at 11:33 am by Sean White

Hopes of a conference-opening upset were deferred as UCSB’s women’s volleyball team was swept, 3-0 by No. 11 Hawaii this past Friday. The Rainbow Wahine defeated UCSB 25-13, 25-14, 25-19. The beginning of Big West play symbolized a clean slate for Santa Barbara, but unfortunately the team’s losing slump extended to seven games. UCSB is now 4-8, 0-1 in conference play and were swept for the fourth time in its last five games. The Gauchos’ offensive errors served as a setback against a dominant Hawaii team. UCSB recorded a total of 17 attacking errors against the University of Hawaii’s six. 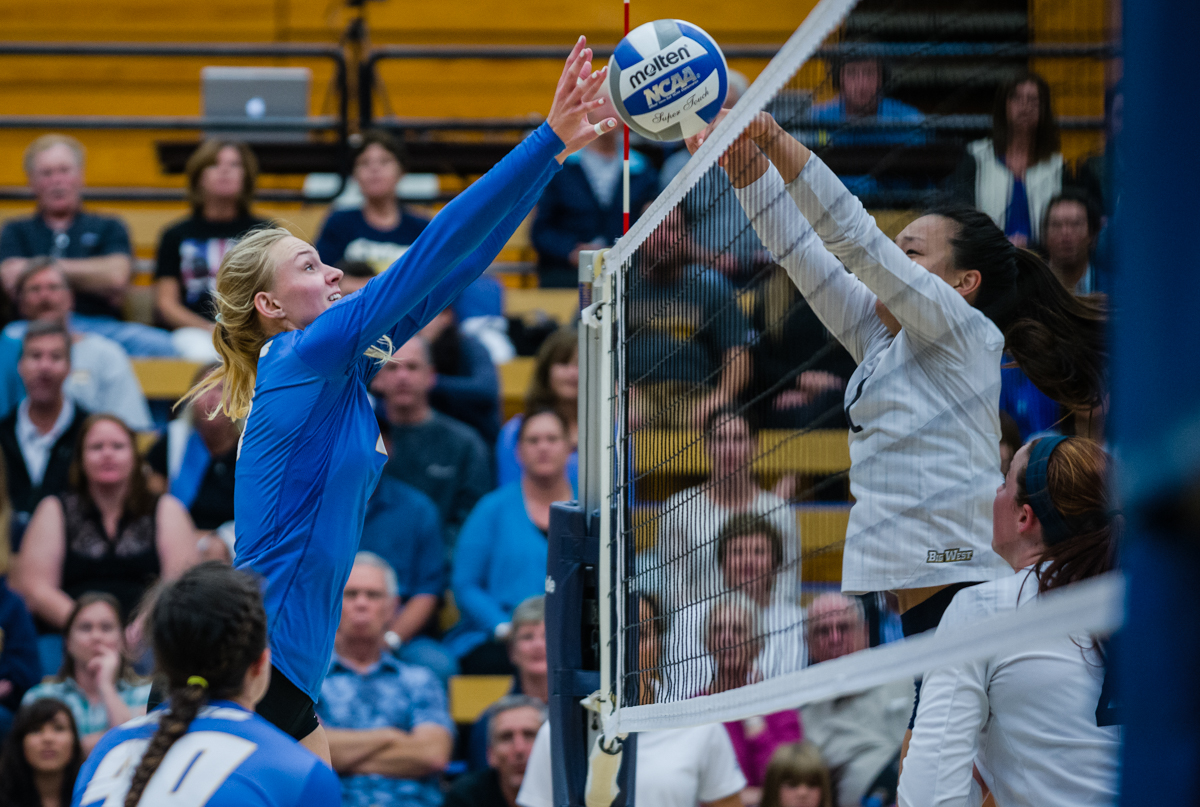 “We didn’t go at it aggressively enough from behind the service line and that kind of allowed them to stay in their rhythm,” Head Coach Nicole Lantagne Welch said. “We had to play very precise. We did that at times, we just didn’t sustain it.”

Last season marked the end of the Rainbow Wahine’s illustrious streak of 19 consecutive conference championships, a winning stretch that combined their success in both the Western Athletic Conference (WAC) and Big West conferences, respectively. With this year’s pre-season prediction to earn a first-place finish in the Big West poll, it was a prominent first step for a Hawaii team that is determined to regain its conference notoriety. The Rainbow Wahine improved to 12-1 and are now 2-0 versus Big West opponents after sweeps of UCSB and Cal Poly this weekend.

A combination of kills, one service ace and one assisted block helped Santa Barbara go on an early 5-2 run. Still, a mentally well-equipped team like Hawaii did not panic as it rallied back with a 4-0 run of its own, taking a 6-5 lead.

Hawaii’s lead remained at a tight margin, but a kill by junior opposite Nikki Taylor triggered the team’s offensive surge to close the set. Up 15-12, Taylor’s attack sparked Hawaii’s 10-1 run to win the game’s first set, taking the 1-0 lead.

In spite of the one-set deficit, UCSB continued to trade points with Hawaii in the opening of the second set. Yet, tied 7-7, Santa Barbra’s inability to limit its self-inflicted mistakes contributed to the Rainbow Wahine having a match-best .452 hitting clip. Hawaii surely benefited from its attacking success as it went on two 6-0 runs, the second scoring spurt gave the Rainbow Wahine a 23-12 lead. Helping capture the 25-14 set win were two kills by junior setter Tayler Higgins and sophomore middle hitter Emily Maglio.

UCSB remained motivated in its quest to trim Hawaii’s lead. While the Gauchos’ ongoing errors persisted in the match’s last set, their offense improved to a team-high .258 hitting percentage. Three different Gauchos tallied a total of six kills, while sophomore outside hitter Chanel Hoffman led UCSB in kills for the fourth straight match with seven.

Still, Hawaii’s outstanding hitting stretch continued as it registered a .433 clip. Leading the Rainbow Wahine was an imposing performance by Higgins. Last week’s espnW Player of the Week, Higgins tallied a match-high 14 kills to go along with a .464 hitting night.

Although Hawaii outhit UCSB, freshman libero Emilia Petrachi logged a match-high 19 digs. However, it was Santa Barbara’s insufficiency at the net that plagued its defense. While UCSB had no blocking errors, the Gauchos blocked just six of Hawaii’s attacking attempts. Not only were the Rainbow Wahine able to capitalize offensively, but they also strived on defense with a total of 19 blocks. In addition to Maglio’s eight kills and .615 hitting clip, she notched a match-high of six blocks to help Hawaii win the final set, 25-19.

Certainly the Rainbow Wahines’ performance on both sides of the net must be acknowledged, but UCSB’s errors proved too costly against a powerhouse program like Hawaii.

“I think Hawaii is a great team. They have no real weakness and they had a huge size advantage on us,” Lantagne Welch said. “I actually thought we played better than the score indicated. If you hit .300 against just about any team you’re gonna win. We just didn’t put enough pressure on them or their offense. We didn’t serve tough at all and we let them off the hook that way.”

Santa Barbara returns to the Thunderdome this Friday, Oct. 2nd to host its conference home opener versus Cal State Northridge at 7:00 p.m. UCSB continues its home stand with a match versus No. 25 Long Beach State on Saturday, Oct. 3rd at 7:00 p.m. as well.