The Daily Nexus
The Daily Stench
The Man Behind the Toupee
September 26, 2015 at 5:07 pm by Evan Swerdfeger 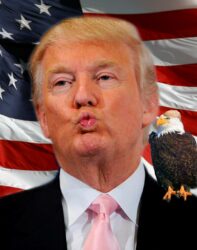 Somehow, the Trump campaign has made its way into September, inexplicably polling ahead of all challengers in the Republican Party. That’s right, boys and girls, or whatever else you might prefer. The man who said this, and this, and this is currently in the lead to be on your ballot come election day in roughly a year. It is with this singularly sobering thought that we take a much-needed introspective look at the man, the candidate, the Donald.

Born in Queens, New York in 1946, Trump was sent to the New York Military Academy as a kid. He later went to Fordham University before transferring to the Wharton School of Finance and obtaining a degree in economics in 1964. After graduation, Trump joined his father’s real estate development company, The Trump Organization. Over the years, the ups and downs of real estate have seen four of Trump’s businesses go bankrupt, with his own personal wealth being a part of one of those bankruptcies. His net worth is currently estimated at around $4 billion, though this is a point of some contention for him, and he claims to have a greater personal fortune.

Trump has occasionally floated the idea of running for either Governor of New York or President in the past, yet has only entered one other race. That race was in 2000 when he won the California Primary of the Reform Party, which is now only considered active in four states. He is also noted for having questioned climate change and the validity of President Obama’s citizenship.

1.) “You know, it really doesn’t matter what the media write as long as you’ve got a young and beautiful piece of ass.”

Wise words to live by.

2.) “The concept of global warming was created by and for the Chinese in order to make U.S. manufacturing non-competitive.”

Science at its finest. Please tell us more, Prof. Trump.

3.) “The wall will go up and Mexico will start behaving.”

Quick to dismiss our neighbors to the south as valueless and little more than a petty annoyance, Trump has had several moments during his campaign which reflect what some might call a less-than-accepting attitude.

Key Moments In The Campaign

1.) “You could see blood coming from her eyes … Coming out of her whatever”

This was in reference to his thinking Fox New’s Megyn Kelly was unfairly targeting him during a debate. Casual misogyny aside, this quote set off a mini Twitter feud (or Twit feud, in the case of Trump) between Trump and one of the few news outlets you’d expect him to be courting, not a smart move.

2.) “He’s not a war hero. He’s a war hero because he was captured. I like people that weren’t captured,” about John McCain.

For this he got just about universally pissed-off responses from veterans and his fellow candidates. Taking shots at a Purple Heart recipient and equating being captured and tortured to being a failure? Stay classy Trump.

Trumps political platform can be summed up in pretty much two aims; anti-Immigration, and anti-China.  Immigration, in fact, is so central to the Trump campaign that the tab “Immigration Reform” is actually the only link in the “Positions” drop-down on his web-site. The man has his priorities.

When he is not too busy with blatant racism, Trump also likes to talk tough about China. Actually he mostly just likes saying the word China, as seen here in a Huffington Post video that compiles all the times he’s brought up his favorite East Asian nation.

Anti-establishment conservatives, fence contractors, a surprising number of white supremacist organizations, those who don’t fully understand what he says but like the way he says it, and himself.

Liberals, establishment conservatives (including his fellow candidates), Veterans, Latinos, and just about any other minority for that matter.

Trump appeals to that little bit of ‘Murica! which, apparently, resides in quite a large number of Americans. He is American exceptionalism personified. And for that, he refuses to back down, even when apologies might be needed. With his brash statements and complete disregard for the PC standards of our day, his platform is attractive to the those who feel America is no longer the kind of all-powerful nation it once was. His rudeness and dismissal of both women’s and minority issues comforts the kind of people who fear the decline of the “American Male” (with white, straight, cisgender and Christian males being implicit). You know, the kind of people likely to use phrases such as “pussification of the American Male” or “attack on masculinity” in the comment section below articles. In the face of an increasingly equal and inclusive society, Trump brings about a nostalgia in certain people for a time in which they could just enjoy being a white man with their other white male friends. Trump’s America is simple and so are his solutions. To “fix” immigration, he’d build a wall. To lower gas prices, he’d just negotiate better with OPEC (despite Canada being our leading source of crude oil, but rule number one is never let facts get in the way of a good sound bite.) Ultimately, the most frightening thing about the Trump campaign is how shockingly effective it has been thus far. Its effectiveness is just evidence of a lack of true coherence in the GOP with no viable alternative that voters are willing to get behind. In the absence of a truly electable GOP candidate without familial baggage, Trump is what the people want. The outsider, the straight shooter, the unapologetic American, the Donald.