The Daily Nexus
Sports
UCSB Picks Up First Ever Win at UCLA, Faces No. 9 Akron and San Diego at Home
September 24, 2015 at 5:04 am by Michael Jorgenson 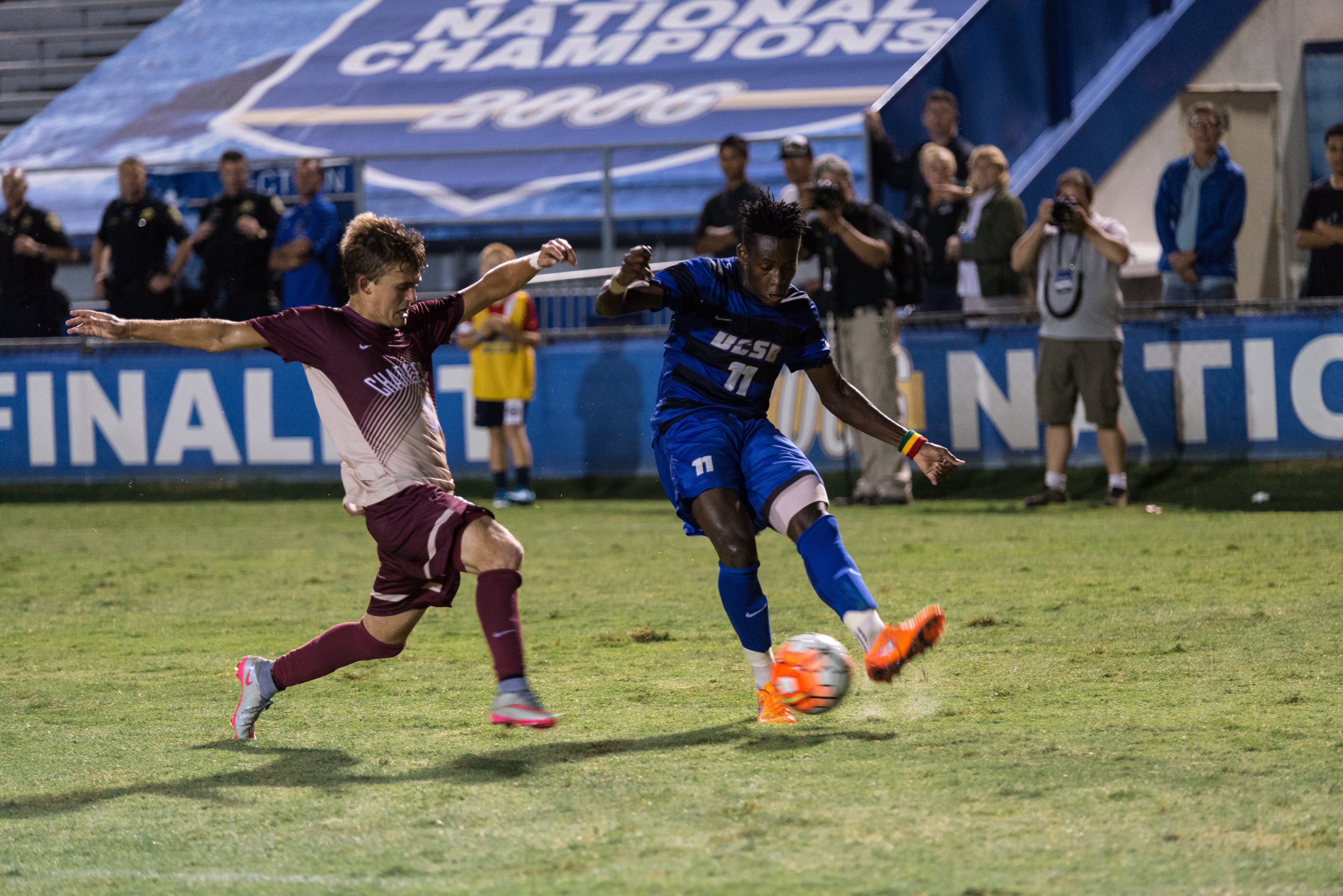 Geoffrey Acheampong crosses the ball after juking past the Charleston defense.

Before heading on the road this past Monday, UCSB men’s soccer Head Coach Tim Vom Steeg joked that maybe this could be the team to finally win a game at UCLA. Thanks to a second-half scoring outburst, the Gauchos’ pulled away from the Bruins for a 4-2 win and their first-ever road win against their UC counterpart.

Santa Barbara returns to Harder Stadium this weekend for a pair of games against No. 9 Akron on Friday and San Diego on Sunday.

With its second consecutive win and its first over UCLA since 2011, UCSB improves to 4-2-1 this season. The Bruins have struggled to start the season by their standards, as the loss was their fourth in five games, bringing their record to 2-4.

The winning formula for the Gauchos prior to Monday night’s game had been coming out strong in the first half, scoring first in each of their opening six games. That wasn’t the case this time around, however.
After conceding the opening goal on a penalty to UCLA’s Larry Ndjock 28 minutes in, UCSB answered back with four straight goals, including two from junior forward Nick DePuy.

The reigning Big West Offensive Player of the Year found an equalizer in the 38th minute, scoring off an assist from freshman forward Geoffrey Acheampong for the second straight week. After receiving a ball from DePuy down the left wing, Acheampong sent it right back to DePuy through the air, and was able to beat his defender and knock a header off the near post and in.

Coming out of the half tied 1-1, UCSB took complete control from there, scoring three goals in less than 10 minutes. Sophomore forward Ahinga Selemani gave the Gauchos the lead in the 54th minute, firing it in from the top of the box to make it 2-1.

Just two and a half minutes later, DePuy scored another header off a corner kick from junior midfielder Josue España, giving him his sixth goal of the season. Soon after, DePuy returned the favor, forcing a turnover on the UCLA half before setting up España for his first goal as a Gaucho.

The Bruins were able to pick up another goal with sophomore forward Seyi Adekoya scoring in garbage time, but they fell well short of mounting a full comeback.

UCSB had struggled to finish its chances in its last game against the College of Charleston, only scoring three times off a season-high 21 shots. The Gauchos were much more efficient finishing this time around, converting on half of their eight shots on goal to pick up their season-best mark of four goals. It was the first time the Bruins conceded four goals in a regular season game since 2010.

Freshman goalkeeper Justin Vom Steeg improved his starting record to 4-2, tying a career high with four saves on the night.

The secret to Santa Barbara’s success is no secret at this point. DePuy has a Big West-leading six goals through seven games. Dating back to last season, he has been on an incredible scoring run, tallying 11 scores in his last 13 appearances.

The Gauchos were able to put forth arguably their best effort of the season despite missing injured juniors Drew Murphy and Ismaila Jome, the only two Gauchos on the Big West Preseason All-Conference Team other than DePuy.

Next up for UCSB is Akron, which enters this weekend boasting a No. 9 national ranking and a record of 4-2-1. The Zips got off to a great start to their season that included back-to-back road wins over No. 25 Georgetown and No. 11 Maryland. Unlike the Gauchos, they have experienced success away from home this season, going 3-1 on the road.

Powering Akron on the offensive side this season has been redshirt sophomore Sam Gainford and junior midfielder Adam Najem. Both players lead the team with four goals and three assists each and will look to break down a UCSB defense that has conceded just one goal at home this season.

On Sunday, the Gauchos will face San Diego. The Toreros are currently 4-2-2 after winning 3-1 at Cal State Fullerton and 2-0 against San Jose State last weekend. Senior midfielder Marvin Schmiege has been their key man through eight games, either leading or tying for first on the team in nearly every important offensive category with three goals, two assists, 21 shots and eight shots on goal.

A version of this article appeared on page 9 of September 24, 2015’s print edition of the Daily Nexus.