The Daily Nexus
News
Motives for Recent I.V. Church Vandalism Under Investigation
September 23, 2015 at 5:00 am by Josh Ortiz 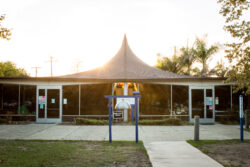 Regardless of the crime’s link to recently displayed “Black Lives Matter” signs and rainbow flags, church leaders are sure the perpetrator was not right in the mind. Stephen Manga / Daily Nexus

The Santa Barbara County Sheriff Department is currently investigating the vandalism of St. Michael’s University Church that occurred on Sept. 10.

Law enforcement officers found the chapel at St. Michael’s University Church to be vandalized at 9:45 p.m. A UC Police Department officer and a Sheriff’s deputy discovered a small projectile object shattered one of the front glass doors of the church. There were no known witnesses to the crime and no arrests have been made.

Congregation leaders at St. Michael’s University Church said in a statement they believe the vandalism to be connected to the church’s recent decision to display signs in favor of LGBTQ rights and “Black Lives Matter” signs.

“We are disappointed about this incident of vandalism on our church campus,” the statement reads. “[We] are especially concerned that it has occurred following the decision to display a rainbow flag and several ‘Black Lives Matter’ placards around the property.”

According to Santa Barbara County Sheriff’s Department Public Information Officer Kelly Hoover, there is little for the department to say at this point in the investigation because of a lack of substantial evidence.

“[The officers] searched the area but were not able to locate anyone connected to the crime and no arrests have been made in the case,” Hoover said in an email. “There were no known witnesses in the crime.”

Church leaders said they also believe the unknown criminal may be struggling emotionally.

“We suspect the person who did this is hurting and angry,” the statement reads.

Third-year electrical engineering major Luke Bucklew said he believes the vandals were “not in their right mind” while causing the damage.

“Maybe the people who did it were drunk or not in their right mind when they committed this act of hate and chaos,” Bucklew said. “I think it’s tragic that people in the city feel the need to vandalize property in whatever state of mind they’re in — inebriated or not.”

A version of this story appeared on page 1 of the Thursday, September 24, 2015 print edition of the Daily Nexus.