The Daily Nexus
Sports
UCSB Hot Out of the Gates
September 17, 2015 at 5:03 am by Elliot Thornton 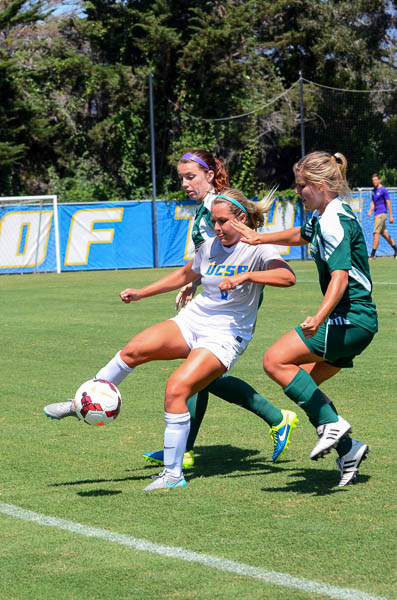 They say inexperience is an obstacle for most teams, but that has not stopped the UCSB women’s soccer team from enjoying a successful preseason. On a learning curve after going 8-9-2 last season, this group of 19 underclassmen has exceeded last year’s standards and proved to Head Coach Paul Stumpf that they are ready to play.

Reaching the midway point of the preseason with an overall record of 4-2-1, UCSB has bounced back from tough losses early on to Saint Mary’s and USF to go on a five-game unbeaten streak. Now in the final two weeks of non-conference play, the Gauchos are getting hot just in time for conference play in the Big West.

“We have a couple new layers we can add to our play after facing these diverse teams,” Stumpf said.

UCSB took care of business on the road last weekend as it traveled to Pennsylvania.  Facing off against Atlantic-10 opponents Duquesne and Saint Francis, this was a great chance for the Gauchos to solidify their chemistry and work out all their kinks before the season.

The Gauchos did so in dramatic fashion against a red hot 3-1-1 Dukes team. Trailing 1-0 in the final six minutes of play, UCSB knew it had one more attack before the end of regulation. Sophomore midfielder Chase Schornstein took advantage of this opportunity as she collected a pass over a Dukes defender from junior Dakota Griggs and launched a kick to the back of the goal post for the 1-1 equalizer.

It wasn’t long until freshman midfielder/forward Mallory Hromatko made her mark on the game as well, blasting a shot from the left side of the box into the right corner and sealing a 2-1 victory for the Gauchos in overtime.

Hromatko wasn’t the only notable freshman that had a productive weekend. Sydney Magnin took advantage of her starting lineup job against 0-6-1 Saint Francis. The midfielder knocked in two goals for the Gauchos, one in the 4th and another in the 33rd minute of play, propelling her team to a 3-2 victory.

Now the Gauchos head back to Meredith Field with hopes of extending their winning streak to five games.

Their success thus far can be accredited to their impressive core of freshmen. Hromatko has carried the load for the Gauchos starting all nine games at forward and leading the team in scoring with nine points and three goals. The Danville, CA native earned herself a Big West Player of the Week nomination last week and looks to be the offensive anchor heading into the conference season.

Jessica Parque, Dakota Griggs and Magnin hope to complement Hromatko’s dominant play on the offensivee side of the field as the regular season progresses. The three freshmen have combined for a total of four goals and four assists, all within their last three games.

“These players are not freshman anymore,” said Stumpf. “They’re nine games in against some of the best competition and the experience they’ve drawn [from these matches] will prepare them for a very tough conference schedule ahead.”

Schornstein and junior center midfielder Sara Feder will offer some valuable leadership to these young freshmen. Schornstein and Feder were valuable pieces to the team last season, scoring seven goals on the year. Both players were recognized for their play as Schornstein was named to the Big West All-Freshman team and Feder as an All-Big West Honorable Mention.

The Big West will be a new level of intensity for the Gauchos but Stumpf is optimistic for the beginning of conference play as his players have been familiar with this type of competitive play prior to playing for UCSB.

“I believe our team will be prepared as most of our players have come from really talented clubs teams who are used to competing at the highest level,” Stumpf said. “If we keep all of our opponents at one to two goals, we’re going to do some damage in this conference because we will score goals moving forward.”

UCSB will play a pair of home games this weekend against Montana at 5:00 p.m. on Friday and Dayton at 1:00 p.m. on Sunday.

This article appeared on page 12 of September 17, 2015’s print edition of the Daily Nexus.