In the hopes of discouraging crime and irresponsible partying, a Santa Barbara commercial aims to send the message that the Goleta college town is reformed 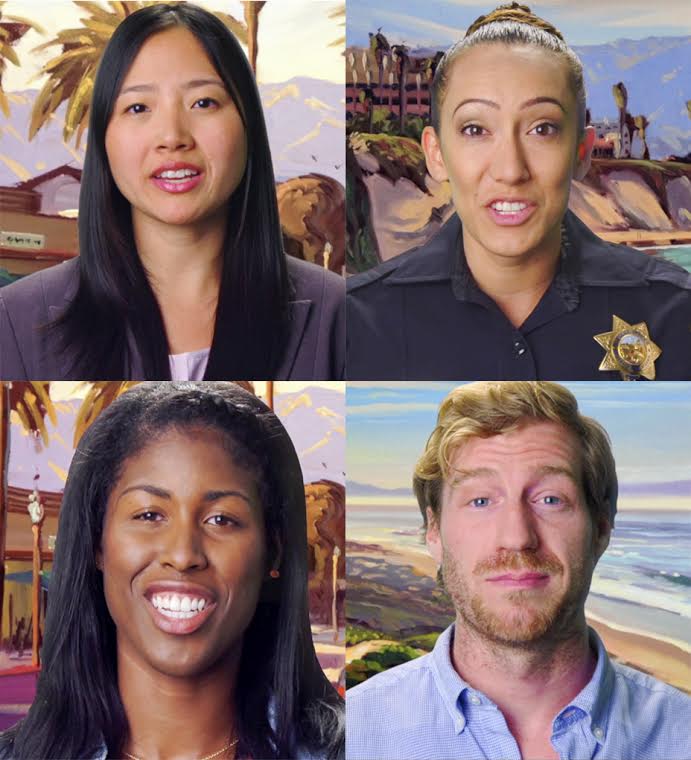 Pictured above are stills from the commercial, which aims to give Isla Vista a better name by promoting safety, increased policing, increased lighting and so on. Photos Courtesy of Ken Berris

The Isla Vista Safe Committee recently developed an ad campaign to be released this week in an effort to rebrand I.V. as safe and to notify the public of changes, including additional lighting, fences and police officers.

The campaign includes fliers and a thirty-second video which features elected leaders and UC Santa Barbara and Santa Barbara City College (SBCC) students and graduates delivering a message, with paintings of I.V., donated by local artist Chris Potter, as the backdrop. The main message in the video ad centers on the letters “I.V.” and encourages viewers to keep I.V. safe by giving back to the community and living a life that makes you proud. The ad will be broadcasted on television in Santa Barbara County, Ventura County, Oxnard and San Luis Obispo County and also shared through social media.

UCSB, SBCC and the city of Goleta each contributed $15,000 for the campaign and the Santa Barbara County District Attorney’s office and the sheriff’s department each donated $5,000. I.V. Safe is comprised of government stakeholders and receives $10,000 annually in funding from Santa Barbara County.

“The group said the most important thing is to change the image of Isla Vista,” Dudley said. “To take it away from being the party school where you come here, you abuse alcohol, drugs and the environment and take advantage of people, commit crimes.”

According to Dudley, the committee is working with film director, writer and branding consultant Ken Berris on the campaign. Dudley said Berris’ daughter attended UCSB and Berris has previously collaborated with the university to create ads during Halloween.

“He’s working very closely with UCSB and they came up with those Halloween ads,” Dudley said. “Everybody felt for the rebranding it was going to be positive … and those beautiful pictures in the background that were donated, he brought that back to the committee and we all liked it.”

SBCC trustee and UCSB alumnus Jonathan Abboud said he believes rebranding should be done from the “ground up” by Isla Vistans and not by officials in Santa Barbara.

“I’m not trying to demean the work of my colleagues … but I believe they made a mistake by not consulting the community,” Abboud said. “This is a very sterile ad, made from people in downtown Santa Barbara who hired a professional consultant to create an ad. That’s why I personally feel like it won’t work, because it doesn’t have that genuine feeling of the town doing it.”

According to Berris, the ad targets locals in Santa Barbara, as well as students and their parents.
“The audience is going to be ideally everyone in Santa Barbara County, from students, to parents, to residents,” Berris said. “We want to start spreading this new communication about what we want I.V. to become again.”

Abboud said the campaign is a “massive misstep” because it does not feature elected Isla Vistans.

“They could use some prominent Isla Vistans in it and not elected officials and public officials from other cities,” Abboud said. “Maybe some of the younger looking people in the ad who look college-aged are Isla Vistans, but … we have a parks board of five people who live in Isla Vista. We have student elected leadership from A.S. None of them are in it.”

Dudley said the campaign sets an expectation, and communicates to visitors certain behavior is not condoned in I.V.

“If people see that’s what I.V. stands for, they’re not going to come here with the notion of destroying and thinking that the community itself is going to support the kinds of activities that have been going on there that negatively impacted public safety,” Dudley said.

Abboud said few people will be exposed to the ad because many people are choosing mediums such as Netflix and Hulu over broadcasted television.

“The majority of media consumed in Isla Vista is not through TV and cable TV in the traditional sense,” Abboud said. “A lot of people have transitioned to other sources like Netflix and Hulu, and this ad doesn’t seem like it would reach these people.”

Alumni Affairs Office Assistant Vice Chancellor George Thurlow said he appreciates I.V. Safe creating the ad, but a brief campaign will not have a large impact on the long-time established I.V. culture.

“The image and quality of life in Isla Vista have been formed over the last 40 plus years (I lived there in the 70s),” Thurlow said in an email. “A media campaign on local television for one season will help but not have much impact. Having said that, we are appreciative of the District Attorney and Ken’s efforts.”

According to Berris, efforts to rebrand I.V. will take several years.

Dudley said she will view the campaign as successful if it decreases the amount of crime and violence in I.V., and if not the committee may have to change its approach.

“The way I’ll be interested in looking at it is did it reduce crime, did it reduce arrests, did it reduce injuries,” Dudley said. “If it’s during the time when these ads have had effect, then I think that’s terrific. If I’m not seeing a reduction in those kinds of things then I would think about other ways that we might want to redirect that fund.”

Abboud said he does not believe an ad will convince visitors not to come to I.V. or not to commit crimes during their stay.

According to Abboud, I.V. Safe’s rebranding effort and exclusion of Isla Vistans in the conversation is not only ineffective but also disrespectful to those who live in I.V.

“No other community would ever have an external government body impose an ad campaign to rebrand it anywhere else in the state or the country, that doesn’t happen,” Abboud said. “It happens very rarely with disenfranchised or disempowered communities and not to respected ones. It shows to me they don’t respect us very much if they’re going to not include us in the conversation 100 percent.”
Dudley said she sees the campaign as a way to show the current status quo of I.V. rather than altering the image of it.

“I see it as not so much a rebranding, as really shining a spotlight on where Isla Vista is right now,” Dudley said. “For lack of a better word, all the things that happened there have had a very sobering effect on the community. The community has come together where public safety is a high priority for the people that live there.”

Berris said he believes any community can be rebranded given time and effort.

“The campaign is essentially the communication tool that lets everybody know that we are changing I.V. back to the great community it was once,” Berris said.

A version of this story appeared on page 5 in the Thursday, Sept. 17, 2015 print edition of the Daily Nexus.