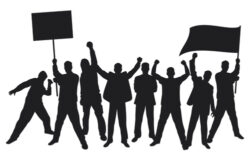 I didn’t get the job, the job I had been dreaming about (quite literally) for the past year. I had thought that this job was a structure to hold all of my wildest passions, shedding light in a single direction to organize everything I had ever seemed good at. I emailed the head of the department asking for her expertise. Where had I gone wrong? What were my weaknesses? Her response shocked me. It may or may not have been the reason that I didn’t receive an offer to work for her. But her response was this: activism. My involvement with “activist” spheres on campus made the department feel as if this would come in the way of my working one-on-one with people from diverse backgrounds. I don’t remember outlining activism as something I do. I also don’t remember the advocacy for ideologies you believe in as being an exclusionary act against certain peoples (when done without discrimination). It seemed that my involvement in being raw with myself and communities I identify with may get in the way of professionalism from the viewpoint of those running these social constructs. Was I being seen as an “angry brown girl” who hates white people? Was it because of my participation in Vagina Monologues and the angry feminist stereotype that too often is associated with its members that got in the way of my success? I don’t understand why respectability politics defines professionalism and why professionalism does not have room for scholarly activism, or, how I see it, just being passionate for active change.

So, what is professionalism? I’ve been taught from youth that professionalism is something to strive for, as it’s the highest degree of career accomplishment and etiquette you can accomplish. In this, I mean that by being a professional in the field you work in, you are beyond competent and offer mastery ability in the workplace for others to be inspired by. You maintain a respectful reputation for yourself and for your colleagues, and you are a leader with much credibility. Professionalism also reminds me of fancy suits, conservative mannerisms and a surface-deep attitude that transcends into strategically arranged dialogue, which is always politically correct and never radical or actually informative. This last view grew over time, as originally, professionalism was just about being respected, right? I grew up wanting to be a professional, to be really good at something I love and to be counted as a prime example of what is successful in this career set. I have always seen myself as a hard-working individual, who is talented in certain circles of activity. But where I have been called out for not being professional is in my outspokenness on social media, publications and humxn to humxn interactions that followed getting introduced to activist spaces on campus. And frankly, nothing better could have happened to my mind, as it expanded immensely.

When I started meeting activists, I learned the most I have ever learned in my life. I learned about student struggles I have never fathomed, people’s challenges I did not know existed, and the feelings behind being discriminated against and systematically oppressed that drive the need for a revolution and their direct action on the frontline of this fight. When you are standing up to a system of hate driven by the most monetarily powerful people in the world, it is effective to be outspoken, radical, and extreme in your demands, from what I’ve seen. It takes so much courage to stand up to these bullies and fight for what should already be protected, which are your rights as a being, freedom and equality in all opportunity. But what needs to be done is being done, which is their dedication to calling out injustices publicly and making sure that action is being taken to keep the head people’s dirty work transparent, and stop it from continuing. So, why do activists get condemned for not being professional? This happens all the time, and most of it is because they refuse to fit into the mold of bullshit that is too often needed in being classified as a so-called “professional.” This mold of bullshit consists of speaking with political jargon that is not really breaking down any point, or an easily accessible way of communicating to more than one type of peoples, dressing conservatively and in a singular dimension, refusing to call out people who are “important” and remaining complacent when you should be emotionally fighting the fight.

This is all my opinion, but sometimes, as a woman, if you don’t wear makeup, comb your hair, wear high heels and cover your boobs, you are seen as unprofessional when dealing with professionals or a professional pursuit. If you are talking about how racist America is online, and spelling America like “Amerikkka,” that can be seen as unprofessional. When you have piercings or tattoos, when you talk about microaggressions or macroagrressions, when you protest or use a raised voice as a vehicle for change, you may be seen as unprofessional. When you write articles about white feminism or Islamophobia, or you question authority in a classroom, this may hurt your chances of getting hired. What the fuck is this bullshit? Why do we have to silence ourselves or shift into a robotic capitalistic business of a being to be hired in most places stably? I am not okay with this.

We need to make a living, even if we are trying to change everything about the world. We need to survive and make money, but we also need to fight.

I’m not saying that I identify as being an activist. I do not. I do not identify with this because I have not built movements, nor revolutionized the way people think or feel in a massive way, nor have I dedicated myself to selflessly working for others. I am not an activist because I do not know enough about the origins of this term, and how it has helped shape struggles into triumphs. But I do believe that by protesting, or writing, or doing anything that is outspoken and doesn’t fit the mold of professionalism, you are classified as an activist, and by being so, you are judged in professional fields. This is what I feel happened to myself. How do we change the concept of professionalism? We need to have more and more people act in opposition to it. As a large force changing social constructs of what it means to be respectable and hirable, we can fight the system while also being hired within the system. We need to make a living, even if we are trying to change everything about the world. We need to survive and make money, but we also need to fight.

I have already spoken my way out of “professionalism,” so frankly, I don’t give a fuck if I offend people who are keeping the flawed system running. I do give a fuck if I never get hired because of it, and that is what makes all the difference. I need to take care of myself, I need to be hired and I need to remain true to what I believe. How do I do all three? That is still being questioned, but the first step is truly banding with like-minded individuals in this core subject and rebelling against all we are taught to be. We need to build community while also tearing down communities that keep respectability politics alive, professionalism one-dimensional and judgments towards radical nature prominent in work fields. Let’s get hired, but let’s burn down the obstacles between protesting on the streets and getting a job in the office. We can do this together. I hope to see you in both environments very soon, able to be who you are and willing to transform together.

On the Nexus Opinion page, not giving a fuck about professionalism is, in fact, a traditional sign of professionalism. You’re always welcome here, Leilani Riahi.

I wouldn’t hire you. I’ve read everything you’ve written for this paper and you come off as unstable and unable to interact with other people in a productive way. I don’t think you lost the job because you were an activist. You lost it because no one wants to work with someone who constantly creates trouble, regardless of whether or not that trouble is morally justified.

Keep fighting the good fight but don’t expect the people you’re fighting against to invite you into their circle.

Leilani Riahi
Reply to  b

thank you for the feedback. The part about coming off as unstable hurt me a bit because I have dealt with unstable moods and such, but I understand. If you’re the same ‘b’ who has commented on my other articles with positive feedback, I’m glad you enjoyed those ones. What do you mean by constantly creating trouble?

Leilani Riahi
Reply to  b

hope
To meet you soon :)

I’m actually working three jobs right now and finishing up my senior year, along with being an officer of Persian student group, active minds, and co president of vagina monologues so I would say that I get along with people really well and am able to communicate in a productive way :) this writing is how I let off my strong opinions. You should add me on Facebook and we should talk more :) I would love to learn from you. I really appreciate the feedback and want to know more of your opinion. My Facebook is Leilani Riahi. Email:… Read more »

Your struggle is not a new one nor is the response you received. Those in positions of power work diligently tomain those positions and rather than evolve and invite different voices and exleriences to the table, administrators prefer to muffle opposition. What’s flawed about that approach however is that it is the actual engagement of conflicting oponions that improves ones position. Good luck…you’ll need it as will anyone that doesn’t bow publicly.