The Daily Nexus
Sports
UCSB Women’s Soccer Heats Up During Return To Harder
September 8, 2015 at 9:23 pm by Elliot Thornton

To say it was an important weekend is an understatement for UCSB’s women’s soccer team. With a two-game visit to Pennsylvania nearing, last weekend was a must-win situation for a winless team hoping to gain some momentum for the tough road ahead.

The Gauchos’ two consecutive wins resulted in a 2-0 victory against Texas and a 3-1 win versus Sacramento State this past weekend. Since its home opener versus San Jose State, UCSB has clinched its first two wins of the season in Harder Stadium. 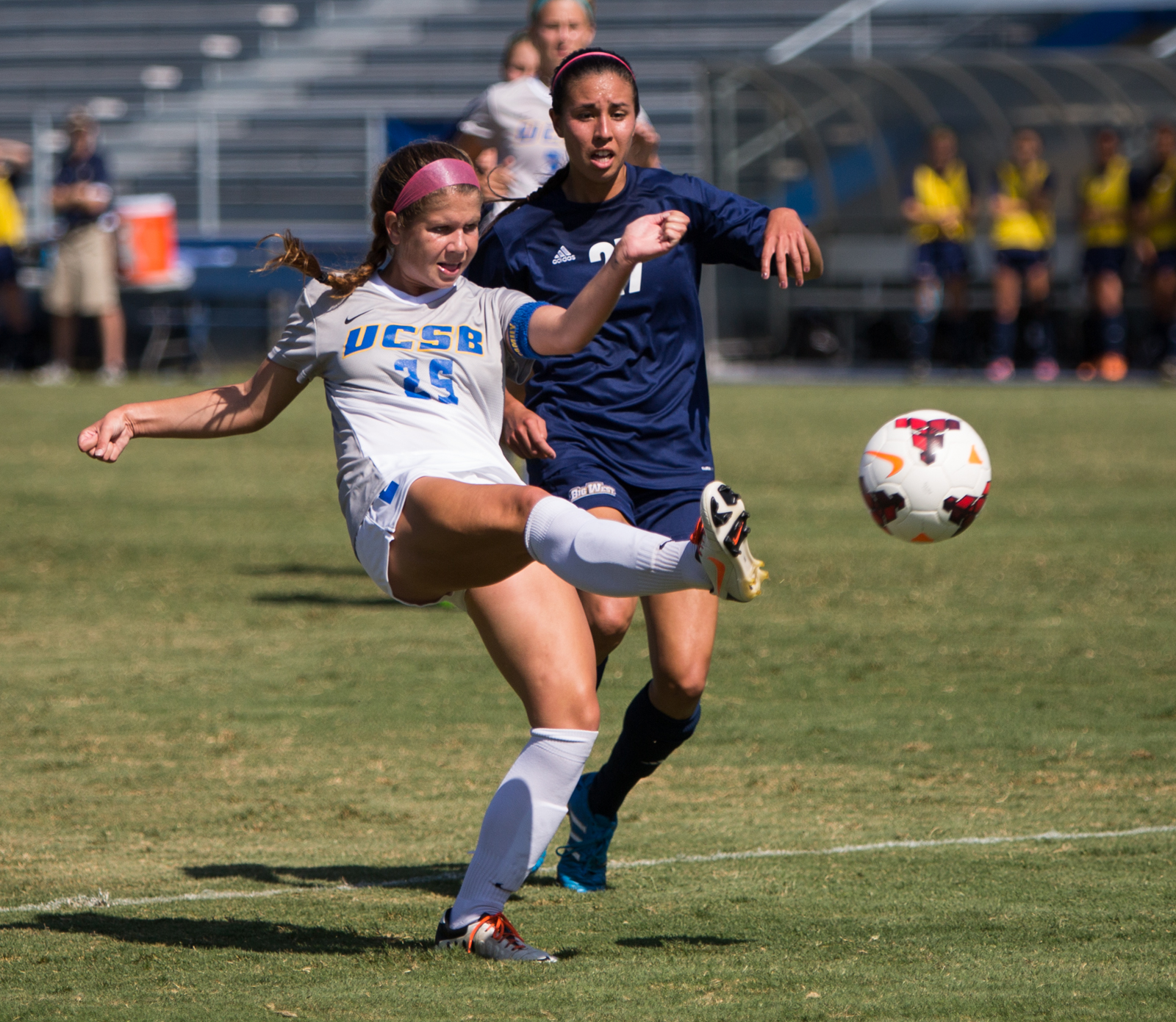 The Gauchos’ took care of business Friday night facing off against a physical and disciplined Texas team. Coming into the match with an overall record of 1-1-1, the Longhorns size was a major obstacle for a much smaller UCSB team. But, the Gauchos were not afraid to battle for each possession and made their attacks in the front line count.

Freshman forward Mallory Hromatko was the main distributor for the Gauchos offensive attack. She consistently found her teammates around the goal box and racked up two assists along with one shot on goal. In the 57th minute, Hromatko advanced the ball toward the right side of the field making an in-and-out move on a Longhorn defender and crossed the ball to the middle of the field for an easy score by freshman forward Jessica Parque. Parque’s first career goal gave UCSB a 1-0 advantage coming out of the second half.

“This was the first time [me and Mallory] got to play a lot of minutes together, but we built a natural connection tonight,” Parque said.

A similar opportunity appeared for the Gauchos in the 86th minute as Hromatko made her attack past a Texas defender toward goal. Working the ball down the right wing of the field, Hromatko made a quality cross to sophomore midfielder Chace Schorstein who popped the ball over Texas goalkeeper Abby Smith in for the score. This was Schorstein’s first goal on the year and third of her career.

“This week during practice we really focused on connecting with the forwards, something we were missing in our previous matches,” Hromatko commented. “I feel like tonight was our breakout game with that.”

The Gauchos maintained control of the match following this point. While Texas outhit the Gauchos in total shots for the game, 11 shots to eight, a couple quality saves from Caginia sealed the deal and helped UCSB to its first win of the weekend.

Caginia finished the night with four saves behind goal, all in the second half, including one diving save in the 59th minute of play off a header from Texas midfielder Kayra Dollas.

“We wanted to come out strong against a good Texas team and show them that UCSB could hang with them,” Hromatko said.

Sunday afternoon was another test for UCSB as Head Coach Randy Dedini and his Sacramento State team traveled to Harder Stadium. Coming off of a 3-2 win against CSU Bakersfield, the Hornets entered Santa Barbara with a 1-3 overall record, but liked their chances against an inexperienced UCSB team. Yet, it was the Gauchos’ young talent that proved to be the “x-factor” during the game’s early stages.

UCSB struck first in the 17th minute off a corner kick connection from junior midfielder Dakota Griggs to Hromatko. Griggs served a perfect ball to the middle of the box as Hromatko climbed over two Hornet defenders sending a header shot into the right side of the goal post. UCSB had a 1-0 advantage until junior forward Adaurie Dayak scored the equalizer in the game’s 34th minute. Launching the ball 20 yards out to the upper right corner of the goal past a diving effort from Caginia, she gave Sac State a momentous 1-1 tie heading into the half.

As the second half approached, the Gauchos took advantage of every early opportunity and eventually caught the Hornets off guard. Barely two minutes into the second half, UCSB’s Parque snagged a loose ball 20 yards out of the box and fired a shot past redshirt freshman goalkeeper Destiny Butcher to the upper right hand corner. Parque’s second goal of the weekend snapped a 1-1 tie and put UCSB back on top, 2-1.

“We told our girls they would have a few more looks than Sac State in the second half and luckily our first opportunity went in which took a some pressure off and made all the difference for us,” Stumpf said.

In the 72nd minute, Stumpf made a lineup change that moved senior Angelisa Cortez to the forward position in place of Hromatko. Beating her defender off the dribble, Cortez delivered a shot to the right corner of the box similar to Parque’s goal, giving the Gauchos some insurance and increasing their lead to 3-1.

“Our team did a good job keeping the ball and wearing Sac State down to finally get that third goal a bit late,” Stumpf said.

Santa Barbara’s two wins over the weekend improved its overall record to 2-2-1. The Gauchos have built some solid chemistry these past couple of games and are currently on a two-game winning streak. But with a packed roster of 34 players, Stumpf hopes his players can keep their cohesiveness throughout the regular season.

“We have 34 girls on the team and not everybody gets to play,” Stumpf said. “Do they deserve to play? Yes. But, unfortunately that’s just not the reality. That is the hard piece of the chemistry to keep their morale up and ready to step up [when asked].”

The Gauchos pack their bags and take a trip to Pittsburgh for matches against Duquesne University on Friday, Sept. 11th and St. Francis Sunday, Sept. 13th. Kick-off will take place at 3 p.m. and 10 a.m.