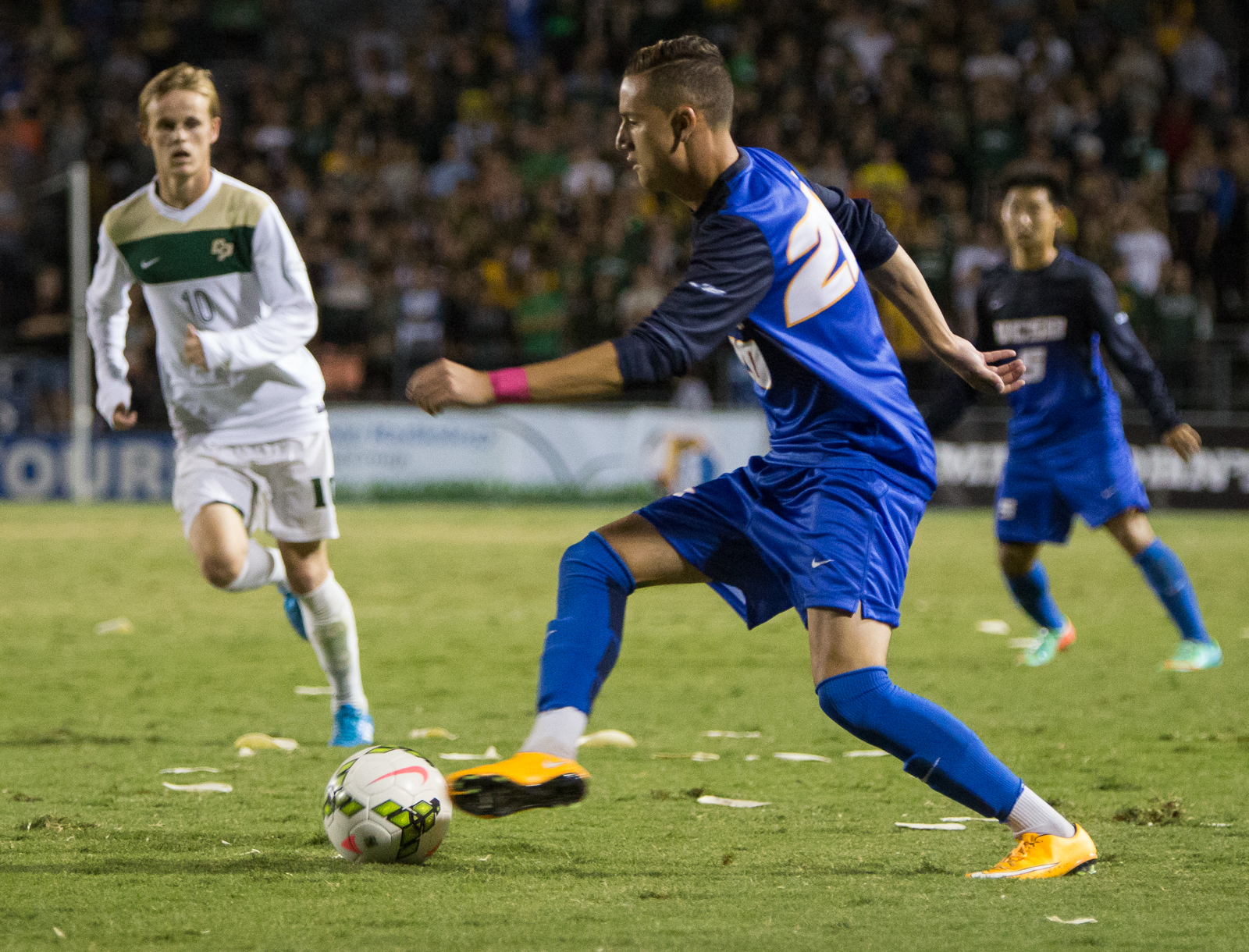 Fresh off a big season-opening win over No. 16 Stanford, the UCSB men’s soccer team heads on its first road trip of the season to Albuquerque this weekend for games against Denver and New Mexico.

“Our expectation is that we finish the weekend without giving up any goals,” Head Coach Tim Vom Steeg said. “I think what we’re looking to do more than anything is getting our offense on track. That’s what I’m anxious to see this weekend.”

With just one game under their belt, the Gauchos jumped up to a No. 19 national ranking based on the NSCAA Coaches poll earlier this week. Last Friday’s win made it five straight season-opening victories for UCSB, putting its record at 10-1 over the last 11 years.

Junior forward Nick DePuy comes in as the Gauchos’ lone scorer, having put away the deciding goal in the 1-0 win over Stanford. Dating back to last year, the former midfielder has been on an incredible hot streak, scoring in six of his last seven games with eight total goals during that span.

“I think we’re way too good offensively to not be able to dominate these two games, create goalscoring chances and maybe put two, three, four goals away,” Vom Steeg said. “At some point this year we’re going to be a team that other teams are really going to fear because we can come at you in a lot of different ways.”

Last Friday’s game also welcomed defender Sam Strong to the lineup for the first time. The composed freshman gave an outstanding debut performance, shutting down a high-profile athlete in Stanford’s junior forward Jordan Morris, resulting in his being named the Big West Defensive Player of the Week. College Soccer News also named Strong to the National Team of the Week.

“Sam and [sophomore defender Jeff] Quezada had a good game, our whole backline did, but we’re going to have to do it again,” Vom Steeg said. “We’re playing a New Mexico team that is going to be one of the better teams in the country. We have our work cut out for us, but Sam and Quezada played together all spring so they do have the chemistry, and I think there’s no reason why we can’t expect to shut people down again.”

Unfortunately for the Gauchos, they will be without starting goalkeeper Justin Vom Steeg. The superb freshman received a call up to the US Under-20 National Team roster to play in the Stevan Vilotic-Cele Tournament in Serbia this weekend after a solid performance of his own against last Friday.

In Vom Steeg’s absence, sophomore goalkeeper Brandon Berke, who started and played well for much of last season, will get the start.

“We’re in a fortunate situation where Brandon was in our goal last year for three quarters of the season,” Vom Steeg said. “It is an adjustment, you do lose a little bit of height with Brandon but at the same time he’s athletic, he’s quick, he gets to balls, he’s a hard-working goalkeeper and he has the confidence of the team.”

With new Head Coach Jamie Franks leading the way, Denver has gotten off to a fantastic start to its 2015 campaign. The Pioneers have started 2-0-0, including a 4-0 win over CSU Bakersfield in their season opener. Taking into account their two exhibition games last month, they have gone a perfect 4-4 on shutouts this year.

“I always feel like when any program has a new coach their players really listen and they’re all trying to prove themselves,” Vom Steeg said. “I always find that those are tough teams to play because you have a team that’s got a lot of energy and a lot of life.”

New Mexico has played just one game this season, losing 1-0 to UCLA last Saturday. When the Lobos last hosted UCSB in 2013, they shut down the Gauchos on their way to a 1-0 win.

“New Mexico is a lot like us in that they will have a very large crowd. They are a team that’s usually built for their field, and it’s just one of the harder places to play,” Vom Steeg said. “It’s going to be a test for us and it’s a game where you really start to find out a lot about your team, especially when you’re on the road.”

Playing on the road has caused problems for UCSB in the past, as it won just three of nine games away from Harder Stadium last year, and New Mexico’s impactful crowd support could make it a difficult environment to play in. However, with a more experienced roster that won its last two crucial road games to close out the season in 2014, the Gauchos should perform well in their first road test.

“This is one of the areas where we just have to do better,” Vom Steeg said. “If we can find a result, that’s something that we can continue to build on. We have four consecutive road games and we’re going to know a lot more about the kind of team and the kind of season we’re going to have.”