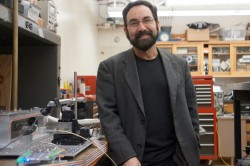 Lubin stands beside the experimental laser setup, an integral component of his team’s project.

According to Lubin, the grant will allow the team to study the technological feasibility of interstellar travel and send out very small probes that will gather information about solar systems. Also, in order to reach the stars, spacecrafts must travel at vastly higher speeds than current space travel technology allows. This can be seen by contrasting the DEEP-IN project with the Voyager Program of the 1970’s.

“For example, the Voyager program, a NASA mission to explore planets in the outer solar system, was launched in the late 1970’s and has just now exiting our solar system at a speed of 16 kilometers per second after 36 years,” Lubin said. “The DEEP-IN technology is proposing speeds at about 30% of the speed of light, which is about 100,000 kilometers per second or 6,000 times faster than the Voyagers.”

With current space technology, such as chemical reaction propulsion or solar sails, there is no possibility of reaching another star within even a hundred human lifetimes.

“The closest star is Alpha Centauri, and, just to give an idea of how far away it is, the farthest spacecraft, Voyager I is roughly 0.05% the distance from earth to the star, after travelling for 36 years. The distance to the sun is labeled as 1 astronomical unit; the Voyager has travelled about 130 astronomical units, while Alpha Centauri is 300,000 astronomical units away from Earth. Using chemical propulsion, if Voyager I were headed toward the nearest star, it would take over 75 thousand years,” Madajian, a second year electrical engineering major and researcher on the DEEP-IN project, said. “Current technology, like chemical propulsion, will not get us to the stars in a realistic amount of time, nor are they feasible for the extremely high speeds needed for interstellar flight, so we are looking at other types of propulsion technologies.”

Consequently, the UCSB project aims to revolutionize space travel through photon propulsion. This unique propulsion system remains on the ground or within Earth’s orbit, which allows for spacecrafts to achieve record speeds through minimizing mass and provides a practical plan to reach interstellar distances in the near future, Lubin explained. 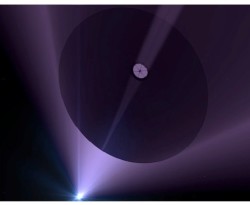 Shown above is an artist’s rendition of direct energy propulsion using a phased array of lasers driving a wafer-scale spacecraft.

Shown above is an artist’s rendition of direct energy propulsion using a phased array of lasers driving a wafer-scale spacecraft.

“We are focused on propulsion in a very different way. We actually keep the propulsion system back home through using a high-power directed energy system, an array of lasers , to push on a reflector which then accelerates the spacecraft away from the laser, instead of taking the propulsion system with the spacecraft,” Lubin said. “Because we are using photons as a propellant, there is no speed limit, except for the speed of light.  In this way we can achieve vastly higher speeds than conventional propellants, constituting the only current way to credibly reach interstellar distances.”

Madajian offers insight into the importance of using a laser in the experimental setup to investigate directed energy propulsion for interstellar travel.

“If you shoot a mirror with a small laser, like a laser pointer, it has a small force on the mirror, however in space, that small force can be significant. With much larger lasers, the force is sufficient to allow extremely large accelerations. The idea is simple, we don’t want to send out a large spacecraft, since these would travel slower; we want to send out miniaturized spacecraft, one that are reduced to the wafer scale.” Madajian said.

The team’s laser array photon driver, combined with low-mass probes, or ‘wafersats’, provides the capability to reach the relativistic speeds needed for interstellar missions. According to Lubin, there are three critical aspects to a mission: the laser array, the reflector, and the spacecraft. The laser, or ‘directed energy system,’ stays near the earth and is used for all subsequent missions. One laser system can be used for a variety of missions. It is used to propel the reflector and the attached spacecraft, which can be anything from a small-mass ‘wafersat’ to a vehicle fit for humans. However more massive spacecraft travel slower, so large vehicles suitable for human transportation are not suitable for interstellar missions in the current context. Much larger systems could enable this in the more distant future.

Lubin and his team have been working on dramatically reducing the size of relevant probes to the wafer scale. They are currently looking at “wafersats” that are about 10 centimeters in diameter with a mass of about 1 gram.

The project initiates a roadmap to interstellar distances, a long-term journey that will progress from very small lasers and spacecrafts to larger ones over time. The possibility of sending a small robotic probe to the nearest star or galaxy makes the DEEP-IN technology truly revolutionary for both science and humanity.

“This research opens the possibilities of exploring ‘exoplanets’ or planets that orbit another star, giving us insight into other worlds both alien and perhaps similar to our own,” Madajian said.

As this research makes reaching the nearest star in a human lifetime a feasible reality, Lubin poses the question, “what does it mean to travel when perhaps one cannot come back to Earth?” This vision of sending a spacecraft to interstellar distances was a vision of science fiction before the team’s technological development.

Currently, the DEEP-IN project and photon propulsion technology constitutes the only realistic and viable “roadmap to the stars.” The DEEP-IN research team is also working to supplement current space technology in order to allow rapid interplanetary exploration in our own solar system. Undergraduates in Lubin’s lab and the Experimental Cosmology Group work on the project, along with local high school students from San Marcos High School and Dos Pueblos High School. Local and international students from the intensive UCSB summer Research Mentorship Program also contribute to the study.

Note: This article had been updated since its publication. The fact about the speed of DEEP-IN technology has been updated to 30% of the speed of light. It was added that Voyager would take 75 thousand years to get to the nearest star. The term ‘wafers’ has been changed to ‘wafersats’. It has been specified that the summer research program is called the UCSB summer Research Mentorship Program. It is to be noted that the DEEP-IN project primarily focuses on interstellar travel, not intergalactic travel.

The article seems to confuse intergalactic travel with interstellar travel. The author mentions travel to another galaxy multiple times, as if that were the same thing as travel to another star. No propulsion system could ever propel an object to another galaxy within a human lifetime. Our galaxy itself is 100,000 light years in diameter. When we look toward just the center of our own galaxy, we are just now receiving photons that left our own galaxy’s center before homo sapiens existed as a species. By contrast, there are stars only a few light years from earth. Traveling to another… Read more »

NASA has the warp drive and it works.

the UK made it work. the web site is on the net.

>>who was David lynch

I want whatever this dude’s smoking.

however a particle came in on the flys eye detectors that was r u ready for this????

to power a warp drive (NASA verified)to x= 50% of speed of light over time space <<<dig it?

and why because i am from the past

i worked on DARPA stuff

C way back then humans reached for the stars

now humans have the KEY!

ok let me be simple for you humans

every object in the universe has changed time frames depending on gravity and where one is.

waaay more pay load and thrust than a light beam

i did that experiment a long long time ago

its ok i am glad you guys got the job

how the hell do i know

its a no brainer and i am not on drugs